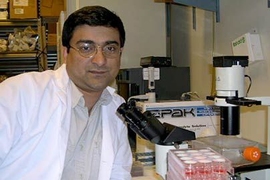 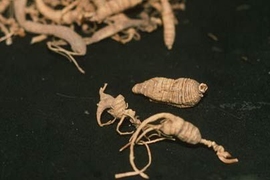 In work that emphasizes the need for stronger regulation of herbal drugs, an international team of MIT scientists and colleagues has unraveled the yin and the yang of ginseng, or why the popular alternative medicine can have two entirely different, opposing effects on the body.

Conflicting scientific articles report that ginseng can both promote the growth of blood vessels (key to wound healing) and stymie that process. The latter is important because preventing the formation of blood vessels can be enlisted against cancer. Tumors are fed by blood vessels; cutting off their supply can kill them.

In the Sept. 7 issue of Circulation: the Journal of the American Heart Association, the researchers from the United States, England, the Netherlands and Hong Kong explain these dual effects for the first time.

Chemical fingerprints of four different varieties of ginseng--American, Chinese, Korean and Sanqi--show that each has different proportions of two key ingredients. Additional studies showed that a preponderance of one ingredient has positive effects on the growth of blood vessels; more of the other component tips the scale the other way.

"We found that this composition really matters for the ultimate outcome," said Shiladitya Sengupta, a postdoctoral associate in MIT's Biological Engineering Division.

Further, the team found that the way ginseng extracts are processed can also alter the compositional ratio. "This is a very clear-cut example of why we need regulations standardizing herbal therapies through compositional analysis," said Professor Ram Sasisekharan of MIT's Biological Engineering Division. With the new results, "we can now rationally isolate the components to focus on a specific effect, such as promoting blood-vessel formation."

In the United States, herbal medicines are currently regulated under the 1994 Dietary Supplement and Health Education Act, which does not require standardization or prior approval from the Food and Drug Administration. "You can basically crush it and sell it," Sasisekharan said.

The new results could also lead to medicines patterned after ginseng's key components. As the researchers write in Circulation, the identification of one of these in particular "opens up the exciting possibilities of harnessing [its] chemical scaffold as a prototype for wound-healing compounds."

Sasisekharan emphasizes the importance of Sengupta's interdisciplinary approach to the work. "He had the foresight to integrate the biology of cancer and blood-vessel formation to the pharmacological behavior of this drug and its structure."

MIT's role in the collaboration grew from Sasisekharan's expertise in complex sugars, which turn out to be key to ginseng's activity. "The sites where sugars are attached and how they are attached are unique for each of the molecular constituents, the ratio of which are distinct among the different varieties of ginseng," he explained. In 1999 Sasisekharan's lab developed a new tool for characterizing complex sugars.

This work was funded by the Cambridge Nehru Trust, the U.K. Committee of Vice-Chancellors and Principals, Hong Kong RGC, the Dutch Cancer Society, and the U.S. National Institute of General Medical Sciences.

A version of this article appeared in MIT Tech Talk on September 15, 2004 (download PDF).