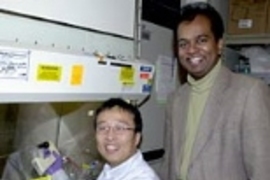 ↓ Download Image
Caption: Research Affiliate Dongfang Liu and Associate Professor Ram Sasisekharan, shown here in the lab in 2002, are part of an MIT team whose research on complex sugars has has led to a variety of potential medical applications. This month the team, led by Sasisekharan, report the creation of designer drugs for preventing blood clots.
Credits: Photo / Donna Coveney

Caption:
Research Affiliate Dongfang Liu and Associate Professor Ram Sasisekharan, shown here in the lab in 2002, are part of an MIT team whose research on complex sugars has has led to a variety of potential medical applications. This month the team, led by Sasisekharan, report the creation of designer drugs for preventing blood clots.
Credits:
Photo / Donna Coveney

A young MIT professor's basic research on complex sugars has led to a cascade of potential medical applications that could, for example, significantly improve outcomes for patients undergoing major operations such as heart bypass surgery and impact a multibillion dollar drug industry.

In the online edition of the Proceedings of the National Academy of Sciences (PNAS) for the week of January 13, a team led by the professor, Ram Sasisekharan, reports the creation of designer drugs for preventing the blood clots that can cause strokes and heart disease during surgery. The resulting drugs have major advantages over the conventional form they are based on, which has an annual market of $2-3 billion. Further, an additional drug based on Sasisekharan's work is presently in Phase III clinical trials for heart bypass patients.

For over 60 years doctors have used the drug heparin--the focus of the current research--during surgeries. Although safe, heparin and its smaller cousin, low molecular weight heparin, have shortcomings that limit their applications.

Those shortcomings are based on the fact that there's been no quick and easy way to determine the exact amounts of the active ingredients of the drugs. "Simply put, low molecular weight heparins are essentially generated by chopping up heparin in a blender, which results in a mixture of large and small pieces with different amounts of active sites, or areas key to anticoagulation," said Sasisekharan, an associate professor in MIT's Biological Engineering Division. As a result, the drugs' strengths vary from product to product; even from batch to batch.

If, on the other hand, scientists knew the structure of those active ingredients and had the tools to clip out only those sites from the bulk material, they could create more effective drugs.

The MIT research reported in PNAS does just that.

"This work started out as fundamental studies on complex sugars and has led to what may become an important new drug to treat conditions such as heart disease. It is an outstanding example of how basic research leads to cutting-edge technologies and medical advances," said Pamela Marino, a biochemist and program director for glycobiology at the National Institute of General Medical Sciences, which partially supported the research.

It began with Sasisekharan's creation in 1992 of a ready supply of the molecular scissors, or heparinases, necessary to "tailor" the heparins. He did so by cloning the heparinase gene, working with MIT professors Robert S. Langer and Charles L. Cooney. That accomplishment, too, was reported in PNAS.

Since then Sasisekharan joined the MIT faculty, and with his graduate students and staff has used the heparinase scissors in several studies with wide-ranging implications. First, the team developed a powerful technique for determining the order of building blocks in complex sugars like heparin. That tool, in turn, led to insights on heparin's active sites. Another study showed that cells' sugar jackets can be tailored to prevent cancer.

In the current PNAS paper the team reports the creation of two "designer" forms of low molecular weight heparin (LMWH), each with specially engineered properties, or activity profiles. They show that in rats the new formulations are much more potent and hence effective than conventional forms of the drug. The new LMWH formulations can also be rapidly neutralized in the body, unlike their LMWH predecessors, opening up additional applications.

"The ability to develop low molecular weight heparin fragments with specific activity profiles represents an important advance in our understanding of how heparin and related compounds work as anticoagulants," said Dr. Elliott M. Antman, M.D., an expert in the heparin field and director of the Coronary Care Unit at Brigham and Women's Hospital. "The benefits of new designer heparin fragments now need testing in clinical trials."

One of the heparinases Sasisekharan developed for tailoring heparin is itself the focus of clinical trials. Currently doctors use a compound called protamine to bind to inactivate heparin in the body when it is no longer needed at the end of surgery. However, "there are serious limitations to the use of protamine," Sasisekharan said. "Importantly, it binds to other molecules in the blood non-specifically, in addition to heparin, potentially causing side-effects."

"Anesthesiologists and cardiovascular surgeons have been seeking an alternative to protamine for a long time," said Jeffrey Borer, M.D., a professor of cardiovascular medicine at Cornell University, in a BioMarin press release announcing the trials. "Neutralase has the potential to allow physicians to have better control over bleeding without the complications that we must currently manage. This could lead to significantly improved outcomes for CABG patients." In 1999, there were approximately 600,000 CABG surgeries worldwide.

Sasisekharan himself is excited--and a bit awed--by the applications that are resulting from his work. "It's very often easier said than done to translate an idea to reality," he said. "To see it happen is really a humbling experience."

In addition to the National Institute of General Medical Sciences, other supporters of the MIT research are the Burroughs Wellcome Foundation, the Arnold and Mabel Beckman Foundation and the CapCure Foundation. Sasisekharan, Langer and Venkataraman are also affiliated with Momenta Pharmaceuticals, where Venkataraman is a vice president. Momenta Pharmaceuticals, in Cambridge, has licensed from MIT a variety of patents related to the work.