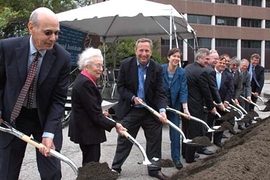 The long-term home of the Eli and Edythe L. Broad Institute is closer to reality today following groundbreaking ceremonies for its major research facility in Cambridge on July 14.

The Broad Institute is a partnership among MIT, Harvard and affiliated hospitals and the Whitehead Institute for Biomedical Research. Its mission is to create the tools for genomic medicine, make them freely available to the world, and pioneer their application to the study and treatment of disease.

The new facility will be built at 7 Cambridge Center, adjacent to the Whitehead and near the MIT Department of Biology on a lot owned by Boston Properties.

Currently located at 320 Charles St. and One Kendall Square, the Broad Institute is home to a range of collaborative research programs that include structural genomics, chemical biology, medical and population genetics and clinical medicine.

"Once completed, this building will provide a more permanent base so that Broad Institute scientists and collaborators can better pursue the promise of genomics for medicine. This location--near the Kendall Square T stop--is central to many of its affiliated scientists, Harvard's medical school and the Harvard affiliated hospitals," Brown said before leading the ceremonial groundbreaking.

Summers said, "This is truly a momentous day for our universities, for this city, for science and ultimately for human health."

"We are thrilled that the Broad Institute will soon have a new long-term home," said Lander. "This building will further our organizational mission to enable the kinds of collaborative projects that cannot readily be accomplished within the traditional setting of individual laboratories and empower scientists through access to cutting-edge tools. The site also underscores our connection to the larger research community at both MIT and Harvard."

The site is currently a parking lot at the intersection of Main and Ames streets. Boston Properties will develop the building with MIT as its tenant. After entering a long-term lease arrangement, MIT began work with Elkus-Manfredi Architects of Boston to design a distinctive 220,000-square foot, seven-story research building.

Completion of the structure will take about two years. By then the number of research scientists and technical staff at the Broad Institute is expected to increase from today's 350 to approximately 600.

About 60 percent of the space at the new location will be dedicated to laboratory work. Besides laboratories and offices, the building will feature a publicly accessible first floor that includes gallery space and a restaurant. A parking garage will be constructed behind the building.

The Broad Institute brings together some of the leaders of the international effort that succeeded in sequencing the human genome. That research is the foundation of the work that will be done at the Broad.