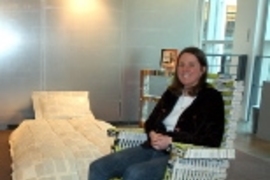 ↓ Download Image
Caption: Stephanie Hartman relaxes in a rocking chair she made out of campus phone directories, part of a book-based bedroom suite on view in Rotch Library.
Credits: Photo / Donna Coveney

Caption:
Stephanie Hartman relaxes in a rocking chair she made out of campus phone directories, part of a book-based bedroom suite on view in Rotch Library.
Credits:
Photo / Donna Coveney

Books arranged around a bedroom theme provided a novel solution to an old problem--how to recycle books.

"One of the goals of art is to explore all materials. I thought using books to build furniture might be kind of interesting, and I didn't think anyone had done it before," said visiting scientist Martin Demaine, who co-led an IAP course that used discarded books and last year's telephone directories as building blocks.

Bedroom furniture wasn't part of the original plan, but when Lisa Smith, a senior in architecture, decided to sew book pages together to make a pillow and quilt, her bed became the centerpiece for a roomful of readable furniture. It's not all novel--some pieces are made from encyclopedias and journals.

Noel Davis, a sophomore in architecture, used volumes 7-33 of an old set of bound Communications of the Association of Computing Machinery interspersed with copies of the Journal of Symbolic Computation to build his arching bench.

Stephanie Hartman, a web specialist at the Barker Engineering Library, selected 98 copies of the 2002-03 MIT Faculty and Staff Directory as material for her rocking chair. "It made it easier to work with the same size, shape and thickness of material throughout," she said.

"One tricky thing is that the chair is held together by bolt rods and compression. Therefore, the size of the back was about a foot or two taller when it was first assembled. It had to be constructed, compressed, marked for where the pieces would join, and then taken back apart again. This was a tedious process," said Hartman--one that was completed at five o'clock one morning, according to Demaine, who was on call day and night to help out participants.

He and his son Erik, assistant professor of electrical engineering and computer science, used 12 volumes of "Science and Technology Illustrated" and 35 young-adult books to build a three-foot bookshelf.

A lamp made by Justin Adams, a technologist in the Office of Environmental Health and Safety (OEHS), and a side table by freshmen Augusta Dibbell and Jen Mitchel contain titles such as "My Friend William Moved Away" and "A Christmas Carol," along with books by Langston Hughes and Jules Verne.

Smith used pages from P.D. James' detective novels as quilt panels which she machine-stitched with red thread. Other book pages were shredded to provide stuffing for the quilt and pillow. The mattress is rows of stacked books.

"I was able to find at least two comfortable positions [on the bed]. I was really surprised; I thought it would be like boulders," said Demaine.

"Yeah, the books have a little give to them," said Smith, who carefully straightened the edges of her handmade quilt to get it to lie just so on the mattress. "I might remove a layer of books so it hangs better."

Most of the books have been cut up and punctured and had metal rods inserted through their centers. Demaine said he expected this defacement to produce an outcry from those who hold books sacred, but so far the reaction to his building materials has been more of a shrug than a riot.

"You would think library people would be the most offended, but they're the most sympathetic," he said.

"These have all been to at least two book sales," he said, waving his arm to indicate the furniture. "Books don't recycle well because of the binding and the glue."

The course's organizers were Erik and Martin Demaine, who works in the Computer Science and Artificial Intelligence Lab; Chris Dewart, technical instructor in architecture; Hartman; and Wendy Jacob and John Ochsendorf, assistant professors of architecture. About 13 other members of the MIT community participated. The City-Wide Friends of the Boston Public Library, the OEHS, the CSAIL Reading Room, and MIT Libraries donated disused books.

The Rotch Library is hosting an exhibit of the furniture through the end of February, with an opening reception tonight from 5-7 p.m. Passersby can see the colorful bedroom through a window on the second floor. It's a comforting sight--a bed and rocking chair on a carpet softly lit by a bedside lamp, with plenty of reading material.

A version of this article appeared in MIT Tech Talk on February 11, 2004.