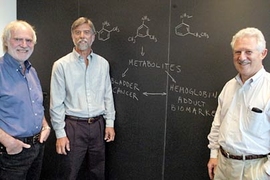 MIT researchers and have identified three new chemical risk factors for bladder cancer in a study involving some 600 people in the Los Angeles area. The work was reported in the Oct. 6 issue of the Journal of the National Cancer Institute.

The newly discovered carcinogens are found in cigarette smoke, which is already known to be a major cause of bladder cancer, contributing to at least 50 percent of the approximately 60,000 cases in the United States every year.

"Identifying the non-smoking related sources of these [carcinogens] should become a high scientific priority," write the authors, who are led by Professor Steven R. Tannenbaum, the Underwood-Prescott Professor of Toxicology at MIT.

"This is very important from a public health point of view," said Tannenbaum, who holds appointments in the Biological Engineering (BE) Division and the Department of Chemistry. "It's much more effective to prevent cancer rather than treat it."

The team also identified six chemicals in the same chemical family that do not appear to be human carcinogens. Because they are chemically similar to their three noxious cousins, they could potentially lead to safer alternatives for the latter.

Authors of the paper from MIT are Tannenbaum, Paul L. Skipper, a BE principal research scientist, and Jinping Gan, a former graduate student. Their colleagues Manuela Gago-Dominguez, Kazuko Arakawa, Ronald K. Ross, and Mimi C. Yu are at the University of Southern California, Los Angeles.

In 1993 Tannenbaum and Skipper teamed up with Yu on the ongoing Los Angeles Bladder Cancer Study. Among other conclusions, that study has since identified a compound in the arylamine family that is a risk factor for bladder cancer in nonsmokers.

In the current work, the researchers extended the Los Angeles study to examine "the possible relationship between bladder cancer â€¦ and nine other commonly occurring and structurally related arylamines," according to their paper.

Specifically, they analyzed blood samples from some 600 of the people involved in the study. Half had bladder cancer; the others did not but were matched against their counterparts for such things as age, sex and neighborhood.

The team then measured exposure to the arylamines via a technique developed by Tannenbaum's team more than 25 years ago. Arylamines to which a person is exposed react with a protein in the blood, resulting in specific products that can be detected and measured via mass spectrometry.

"So what popped out of this was actually pretty startling," Tannenbaum said. "Three of the nine compounds were indeed found to be significant risk factors for bladder cancer in nonsmokers. And except for one, none of those nine had ever been investigated before" for their potential carcinogenic activity, Tannenbaum said.

A version of this article appeared in MIT Tech Talk on October 20, 2004 (download PDF).