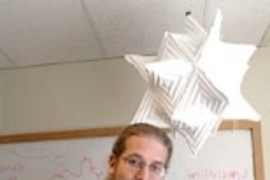 A 22-year-old MIT professor whose work fuses art, science, work and play is the recipient of a $500,000 MacArthur Fellowship, commonly known as the "genius" grant.

Assistant Professor Erik Demaine of electrical engineering and computer science--who last month was called one of the most brilliant scientists in America by Popular Science magazine--is one of the youngest people ever selected for the fellowship and the youngest of the 24 named this year.

Demaine is interested in abstract geometry problems related to folding and bending that have practical applications in fields as diverse as manufacturing (sheet metal fabrication) and biology (protein-folding).

At age 17, he unfolded the secret behind a complicated geometry problem. Demaine and his collaborators proved mathematically that it is possible to create any conceivable straight-sided shape by folding a piece of paper and making a single scissor cut. This launched the field of computational origami, an interdisciplinary endeavor on the boundary of computer science and mathematics.

For his doctoral thesis, Demaine solved the "carpenter's rule problem," a mathematical dilemma first posed around 25 years before. If you take a set of rigid bars connected by hinges lying flat on a table, is it always possible to fold the chain from one configuration into any other configuration without any of the bars crossing one another? The answer, Demaine proved, is yes.

"Winning the MacArthur grant is great, because a lot of the things I do are very theoretical and not so easy for regular grant organizations to fund," said Demaine. "It's definitely a helpful sum of money."

The John D. and Catherine T. MacArthur Foundation awards the grants "to enable recipients to exercise their own creative instincts for the benefit of society at large," It requires nothing in return during the five-year grant period--no reports, products or follow-up of any kind.

"We've been thinking of using the grant for a large-scale art project, possibly to cast a big metal version of [an origami] paper form," said Demaine, who frequently collaborates with his father, Martin Demaine, a visiting scientist at MIT's Computer Science and Artificial Intelligence Lab and an artist in the MIT Glass Lab.

Demaine was home-schooled by his father from age 7 to 12, when he entered Dalhousie University in his hometown of Halifax, Nova Scotia. He earned his bachelor's degree two years later in 1995, then went to the University of Waterloo for his master's degree in math (1996) and the Ph.D. (2001). He joined the MIT faculty that same year, at age 20. At the same time, his father was hired as a visiting scientist.

"His background is in visual arts, so he's been my art influence," said Demaine. "Then I got him interested in algorithms and computer science. Lately we've been trying to combine these two."

Another large art project Demaine is considering is that of a "shadow wall," something he and his father have talked about for years. The idea is that a brick wall could be built with a few bricks strategically turned to cast a recognizable shadow picture when the sun shines at a particular angle. Such shadow pictures would require complex mathematical models, particularly if the pictures were to change throughout the day, said Demaine. For instance, early in the morning the shadow might make a picture of a young boy, transforming by the end of the day into an old man.

"We don't know if this is even possible," said Demaine. "It's a big geometric problem. But if we could do it, it would be awesome."

The phone call that could make the project possible came on a Monday morning. "I assumed it was someone trying to sell us something," said Demaine. "So I let my dad answer it." Demaine said it took a few minutes after the phone call to absorb the news. "I'd heard vaguely of the MacArthur grant before, but it took me some time to place it," he said.

When asked how he celebrated, Demaine paused for a moment. "I don't think we did; we've just been so busy. But I guess we should."