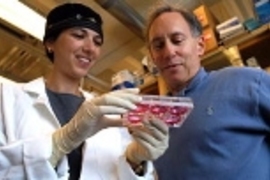 MIT engineers report a new approach to creating three-dimensional samples of human tissue that could push researchers closer to their ultimate goal: tissues for therapeutic applications and replacement organs. The technique could also help answer questions in cell and developmental biology.

The team "seeded" human embryonic stem cells, which have the potential to differentiate into a variety of specialized cells, onto a biodegradable polymer scaffold. By treating the scaffold/stem cell structure with chemical cues, or growth factors, known to stimulate the formation of specific cell types, the researchers coaxed the stem cells to form tissues with characteristics of developing human cartilage, liver, nerves and blood vessels.

"Here we show for the first time that polymer scaffolds ... promoted proliferation, differentiation and organization of human embryonic stem cells into 3-D structures," the researchers wrote in a paper to appear the week of Oct. 13 in the online edition of the Proceedings of the National Academy of Sciences.

Further, the resulting tissues continued to thrive when implanted in mice with suppressed immune systems (to eliminate rejection). They expressed human proteins, and integrated with the host's blood-vessel networks.

"For me it was very exciting to see that these [stem] cells could move around and start to 'talk' with one another, generating the different cell types common to a given tissue and organizing into that tissue," said Shulamit Levenberg, first author of the paper and a research associate in the Department of Chemical Engineering.

The technique could also have an impact on the study of cell and developmental biology. "When you give cells a three-dimensional structure [on which to grow], it's really a lot more like what's happening in the embryo," said Levenberg.

Levenberg's colleagues on the work are Robert Langer, the Germeshausen Professor of Chemical and Biomedical Engineering; MIT alumna Ngan Huang (S.B. 2002); Erin Lavik, a postdoctoral fellow in the MIT-Harvard Division of Health Sciences and Technology who is now a professor at Yale; Arlin Rogers of MIT's Division of Comparative Medicine; and Joseph Itskovitz-Eldor of the Technion in Israel.

The work provides a new approach to prodding stem cells to grow into different tissues. Before, researchers created a variety of cell types from one batch of stem cells, then isolated the cell type of interest. The isolated cells were then grown on a given medium, such as a polymer scaffold. The same MIT team did just that last year with the endothelial cells that blood vessels are composed of.

This time around, the MIT researchers seeded stem cells directly into the scaffold. "We found that with different growth factors, we could push them in different directions," said Levenberg.

The polymer scaffold is key. "The scaffold provides physical cues for cell orientation and spreading, and pores provide space for remodeling of tissue structures," the researchers wrote.

The scaffold was carefully engineered. "If the scaffold is too soft," for example, "it collapses under the cells' mechanical forces," said Levenberg. The team also used two different polymers to create the scaffold. "One degrades quickly, the other more slowly," she said. "That gives cells room to grow while still retaining a support structure for them."

The work was supported by the National Institutes of Health. The human embryonic stem cells are from an NIH-approved line.