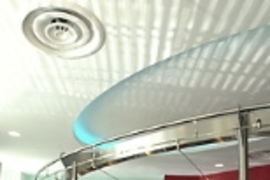 The coffee competition on campus ratcheted up Monday with the opening of Bosworth's cafe in Lobby 7, serving Peet's Coffee, the San Francisco brand known for its fresh beans and flavorful dark roasts.

The shop, described as "upscale and contemporary" by its planners, is tucked into the southeast corner of the lobby. It opened to little fanfare, but a grand opening celebration is planned for the Sodexho-run shop next week, Feb. 10-14.

The customers, most of whom care quite a bit about the coffee they drink, approached the cafÃ© with high expectations.

"It's way better than anything we've had on campus so far--both the atmosphere and Peet's coffee," said Bridget Brown, a senior in economics. "I'm a big coffee drinker, so I'm really excited. It's on the way to class."

Admiring the ambiance, freshman Sarah Buckley said, "Hopefully this will be good. It's definitely an attractive design and definitely caught my eye."

Carol Breen, the communications administrator in the physics department, buys two cups a day. One in the morning "and often in the afternoon if my spirits are flagging I'll get an espresso," she said. "I've been going to Starbucks since Tosci's closed, but I might try Peets now. It seems to be strong enough. If you really love the stuff--coffee, chocolate, whatever--then you search out the best."

And search they do, with the doggedness of a search and rescue mission. The MIT community buys an estimated 4,000 cups of coffee at campus dining shops every day, not to mention all the coffee brought to campus and brewed in offices.

"I think we have more [brands of] coffees on this campus than any other campus in the country," said Ward Ganger, campus dining manager, who hopes that every campus coffee lover can find the perfect brew.

The new cafÃ©, named after William Welles Bosworth, the architect alumnus who designed the main MIT campus in the late 19th century, was conceived a few years ago as part of the Lobby 7 renovation plan. CafÃ© tables and chairs will be placed along the southern wall of the lobby next month, so customers can linger if they choose.

Sloan graduate student Joost Bonsen said the cafÃ© is a great addition to the campus's main entrance. "Calling a small cup a 'medium' is a bit Orwellian, but other than that it's a great joy to have a cafÃ© called Bosworth's in this cathedral of creativity. I mean look around you," he said, gesturing widely to indicate the refurbished dome skylight and renovated Lobby 7. "This place is amazing."