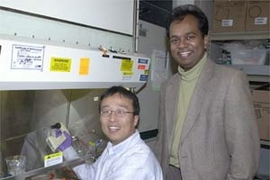 CAMBRIDGE, Mass. -- MIT scientists wielding molecular scissors have shown for the first time that the sugar jackets of cancer cells can be tailored to inhibit tumors. The work, which could lead to drugs that attack cancer cells in a very specific manner, is reported in the January 22, 2002 issue of the Proceedings of the National Academy of Sciences (PNAS).

The web of material that surrounds every cell, known as the extracellular matrix, is critical to cell function, orchestrating how signals from outside the cell are processed and perceived by it. The key components of that web are complex sugars and proteins.

Scientists have made substantial progress in understanding web proteins and their roles, leading to exciting new drugs like the anti-cancer endostatin, but insights into the sugars have lagged. That's because the sugars are more complex and have many more building blocks than DNA or proteins, making them more difficult to study. New tools developed at MIT, however, are changing that. The MIT team is led by Associate Professor Ram Sasisekharan of the Division of Bioengineering and Environmental Health (BEH).

"Dr. Sasisekharan's highly innovative approaches to studying carbohydrates provides the missing framework necessary for ongoing studies by him and others. These advances continue to reveal Nature's secrets about how these important molecules play key roles in health and disease," said Dr. Michael Rogers, a chemist at the National Institute of General Medical Sciences, which provided research funding for the work.

Accompanying the MIT paper is a commentary by Professor Ajit Varki of the University of California, San Diego, titled "Six Blind Men and the Elephant - the Many Faces of Heparan Sulfates." Heparan sulfates are the sugars found in cell jackets.

In the current work the MIT scientists used the new tools to probe the relationship between changes in tumor cells' sugar jackets and cancer. Were the sugars associated with different stages of cancer directly responsible for tumor growth, or simply byproducts?

To find out, Sasisekharan and colleagues isolated two distinct sets of these sugars via molecular scissors, or enzymes, that clip the cell's sugar jacket in different places, resulting in different sugar fragments. The enzyme heparinase I [hep I] created the first kind of sugar; heparinase III [hep III] the second.

The researchers were astonished by what happened when they injected either hep I, hep III, or their respective sugar fragments into mice with cancer. Injection of hep I or its sugar fragment promoted tumor growth, while hep III or its product dramatically inhibited growth. The two similarly influenced tumor metastasis and the growth of blood vessels.

"We were fascinated by the discovery that the tumor cell's sugar coat contains sugar sequences that can both promote and inhibit growth," said Sasisekharan, whose co-authors are BEH Research Affiliates Dongfang Liu and Yosuf El Shabrawi; BEH Postdoctoral Associate Zachary Shriver; and Ganesh Venkataraman, a research associate affiliated with BEH and the Harvard-MIT Division of Health Sciences and Technology.

It is possible that during cancer, tumor cells wear sugar jackets that enable them to either be dormant or rapidly grow and support tumor progression. Cancer could therefore depend on a kind of biological balancing act. "Tumors might be kept in check by the body's production of specific enzymes that in turn release sugar fragments that keep tumor cells dormant. Or, perhaps in response to pathophysiological changes, a tumor cell releases different enzymes that enable the tumor to grow more rapidly," Sasisekharan explained.

In their PNAS paper, the scientists report additional studies in which they explored exactly how the sugar fragments act on cancer cells. Their conclusion: the fragments bind to and therefore affect the activity of specific signaling molecules involved in tumor activity.

The overall work has implications for future cancer drugs. "These findings suggest that the sugar coat worn by tumor cells, which varies according to tissue type, may provide a tissue-specific target for new anti-cancer therapies," according to PNAS.

The current results could not have been achieved without the new tools developed at MIT. A key example is a technique to determine the linear order of building blocks in complex sugars. "Once you have the sequence of building blocks for a given polysaccharide, you can start cracking the biological function of that sugar in the tissue," explained Sasisekharan. Similar sequencing techniques for DNA and proteins have been instrumental in shaping the biotechnology industry. Together, the MIT tools "allowed us to not only characterize the sugar fragments [reported in PNAS], but to experimentally tilt their balance in the cell," Sasisekharan said.