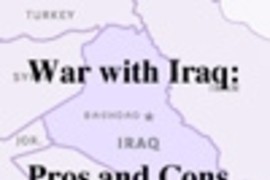 Three panelists on a Center for International Studies discussion titled "War With Iraq: Pros and Cons" on Monday agreed on two points:

They arrived at the point of advocating U.S. aggression by different routes, and they directed the audience to different views along the way. None expressed confidence in the Bush administration's foreign or domestic preparedness policies.

The trio also agreed on the failure thus far of strategies for containment of Iraq (by economic sanctions and United Nations weapons inspections); for deterrence (by threats of retaliation); and for covert action to remove Saddam Hussein from power by anyone.

Pollack, who spent 12 years working with the CIA and is a "former poster boy for containment," said he now advocates using overwhelming force, including massive ground troops, to invade Iraq, remove Saddam and reconstruct the country along stable and democratic lines.

To illustrate, Pollack focused on Saddam's grisly treatment of his own people; his military and personal imprudence, contrasted with leaders of North Korea or Iran; and his 25-year record of "reckless, aggressive serial miscalculations" including his attacks on the Kurds in 1974, his invasion of Kuwait leading to the Gulf War in 1991 and his provocation of Operation Desert Fox in 1998.

Since Saddam's development of biological and chemical weapons of mass destruction is already documented, and his lust to develop nuclear weaponry is well known, a swift and terrible invasion of Iraq makes sense, Pollack declared.

However, such an invasion "would be no cakewalk," he added. "It could be a nasty fight," requiring a multinational coalition and effective easing of Arab-Israeli tensions. Pollack's new book, "The Threatening Storm: The Case for Invading Iraq" (Random House), details his argument fully.

Characterizing Saddam as a "Stalin-style killer, a human rights monster and a narcissist surrounded by sycophants," Van Evera zeroed in on the ongoing menace of Al Qaeda and other U.S. priorities. He urged that any military action against Iraq be considered in the light of American preparedness for terrorism at home.

Van Evera, like Pollack and Cote, criticized the Bush administration's foreign policy for overall "poor judgment." He cited the administration's failure to address pressing and ominous problems such as "loose nukes" in Russia, instability in Afghanistan and Pakistan, unremitting Arab-Israeli violence and the need for intelligence reform at home.

Cote criticized the Bush administration's hurry-up approach to invading Iraq, which partly arises, Cote said, from the "deeply pernicious concept" of lumping all weapons of mass destruction together.

"If this war is to get rid of chemical and biological weapons, the timing doesn't matter, since they've had these things a long time. If it's a preventive war to keep Iraq from getting nuclear weapons, we've got a big window," said Cote, noting that it takes both money and time to obtain fissile materials and build factories for nuclear weapon development.

American efforts, Cote said, could be far more effective if concentrated on "going to the source of fissile material - Russia - and securing those stockpiles. Also, it's just hubris that says our nuclear stockpiles are secure," he said.

The CIS will sponsor a panel titled "A U.S. Invasion and Occupation of Iraq: Concerns and Scenarios" at noon on Monday, Oct. 28 in Wong Auditorium. For information, call Laurie Scheffler at 253-3121.

A version of this article appeared in MIT Tech Talk on October 23, 2002.