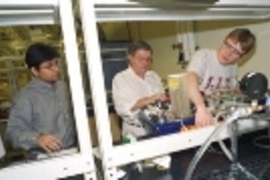 CAMBRIDGE, Mass. -- When Clark Colton wrote a proposal to make a complicated heat exchanger accessible to students by remote control over the web, his only goal was to see whether it would be useful for one of his courses. He never envisioned that the machine would quickly find applications in two additional MIT courses and one at the University of Texas at Austin.

Heat exchangers, which involve separate streams of hot and cold fluids, are "everywhere," said Colton, a professor in the Department of Chemical Engineering. In chemical plants and power plants, air conditioners and refrigerators, one fluid is used to change the temperature of another. For example, the hot water exiting a power plant can be cooled by proximity to a stream of cold water.

Because heat exchangers are important in the chemical engineering curriculum, one that could be operated by students over the web might be useful, Colton thought. So with funds through MIT's I-Lab and I-Campus initiatives, he bought a heat-exchanger system modified by its manufacturer to be suitable for remote control.

He knew, however, that it could not yet be operated remotely on the web. The machine didn't come with the software to do so. Enter Rubaiyat Amin Khan, a graduate student in civil and environmental engineering who wrote the software that allowed an interface with the web. Khan earned his master's degree for this accomplishment, which he did in about a year.

Last November Colton and Khan decided it was time to test the now web-friendly machine in an undergraduate course on heat and mass transfer. Students were asked to solve a problem by accessing the machine, changing certain variables as it ran, and noting the consequences. "This first trial was an extended homework problem," Colton remembers. "Even though the web site was rudimentary at that time, we learned a lot about how students respond to that kind of environment and what improvements they would like."

"Prior to this project I did not fully appreciate the value of exposing our students to equipment on the web," he continued. That changed when the heat exchanger went online. Colton was surprised by the extent of students' enthusiasm, even though he himself finds running the exchanger "a bit addictive, actually. It's really fun." As a result, "I think this approach has real potential for lecture courses that do not have a lab component. Without going to a lab, students can work with real equipment and compare its performance to the theory they learn in class."

Feedback has been quite positive, Colton said, except when students run into software or equipment failures. "Then they get very frustrated, so there's a premium on reliability," Colton said. Although his team has solved several key problems, the system does not yet run 24 hours a day because time is allotted for equipment maintenance.

Richard West, a participant in the Cambridge-MIT Institute, was one of the juniors taking the course last fall. He wrote Colton about a problem he'd found in the system: the temperature of the hot water oscillated widely. He discovered that "we had not yet learned how to properly control the system," Colton said. So when West asked if he could work on the problem as a UROP project, the professor said yes.

Over Christmas West borrowed a textbook on process control, "and then it was a case of experimenting and trying various things," he said. By February 2002 the problem was solved.

And that introduced yet another application of the equipment. Colton, Kahn and West already knew that the heat exchanger was useful for online experiments on heat transfer; now they realized that it could also be used to teach students about process dynamics and control.

End result: this spring the heat exchanger was used in two additional MIT classes. In the Chemical Engineering Processes Laboratory, it was used as a vehicle for preparing a technical report to satisfy the Phase 2 writing requirement. It was also used in Process Dynamics, Operations and Control, an undergraduate course taught by Barry Johnston, a senior lecturer in chemical engineering. Some 125 MIT students have now used the machine.

Thanks to a serendipitous e-mail, the heat exchanger was also used in a University of Texas, Austin, class this semester. Last winter UT Professor R. Bruce Eldridge sent an e-mail to Dean of Engineering Tom Magnanti asking if anyone had any quality multimedia content in heat transfer. The note eventually found its way to Colton, who asked Eldridge if he'd like to use the web-controlled heat exchanger in his course.

UT students have only recently completed their assignment using the machine, so Colton hasn't gotten any extensive feedback, but "no problems were reported and Eldridge has asked if he can make it a permanent part of his course."

More information on the heat exchanger project, including a video of the equipment, is at http://heatex.mit.edu. The work is part of MIT's I-Lab project, which is funded largely by Microsoft through the I-Campus initiative.