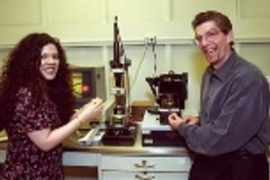 CAMBRIDGE, Mass. -- The molecular "bristles" key to cartilage function are revealing new secrets thanks to novel nanoscale mechanical measurements by MIT researchers that will also help characterize other components of the tissue that cushions our joints. Understanding cartilage function - and disfunction - on a molecular level could lead to cures for diseases such as osteoarthritis and techniques for repairing cartilage damaged in accidents.

"For decades this rather amazing complex biocomposite material has baffled scientists as to how it exhibits such outstanding compressive stiffness, toughness, strength, resiliency, and shock absorption, and why and how these properties degrade with age and certain debilitating diseases," said Christine Ortiz, an assistant professor in the Department of Materials Science and Engineering.

The new work, to be reported in the journal Macromolecules, will aid studies to that end. It represents the first direct measurements of the nanoscale forces between a surface of real "bristle" cartilage molecules and a tiny probe tip of known geometry and chemistry. The results give insights into bristle behavior and structure.

"Currently we are expanding this project to look at the forces between the other load-bearing molecules of cartilage to help understand the role of each," Ortiz said. The basic techniques used in the work, she noted, are also being used by the same team to explore systems such as industrially important polymers, drug particles, bone and bone implant materials, and interactions between membrane proteins and foreign bodies.

Cartilage is composed of a stiff, spongy matrix and the cells that produce that matrix. The matrix, in turn, is made up of a tough collagen mesh and a gel of molecules known as proteoglycans.

That gel, whose basic building block resembles the circular brushes used to clean bottles, is the focus of the current work. "For many years we've suspected from measurements at the tissue level that these molecules play an extremely important role in cartilage function because of electrical repulsive interactions between the brush 'bristles,' or glycosaminoglycan (GAG) chains," said Grodzinsky, who is also director of the Center for Biomedical Engineering.

In 1995 Grodzinsky's lab predicted via theoretical models what the repulsive forces should be between these bristles. To probe the bristles directly, the current team removed bristles from their protein backbone and chemically attached one end of each to a gold surface. They packed the bristles as closely together as possible to mimic the structure of native polymer (proteoglycan) brushes. The distance between each bristle: about two to four nanometers, or billionths of a meter.

A new nanomechanical instrument called the Molecular Force Probe was used to make the measurements. The team outfitted the machine's probe tip, which is only about 25 nanometers in radius, with known molecules. They were then able to measure the forces between the tip and "bristled" polymer surface as the tip was moved up and down at a constant rate. "To have a window into how these GAG molecules deform just hasn't been done before in the cartilage field," Grodzinsky said.

The results of this first experiment, in addition to new molecular-level theoretical simulations, have helped quantify the contribution of different forces between bristles. The electrical repulsive, or electrostatic, forces were found, as expected, to be dominant, but steric forces - or those that result when one simply presses down on a tissue - also played a role. "Our primary goals are a total deconvolution of the individual force components, a complete understanding of how they are related to each other, and how they lead to macroscopic biomechanical properties," the team writes.

Ortiz notes that "since multiple forces acting in tandem are a hallmark of most other areas of biophysics, polymer physics, and surface science, this new methodology will have far-reaching implications."

In the near future, said Grodzinsky, the team also plans to look at the molecular behavior of diseased cartilage.

The work was sponsored by the Dupont-MIT Alliance, the NIH, the Whitaker Foundation, and the Shriners of North America.