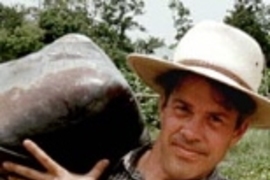 ↓ Download Image
Caption: "It was kind of a crazy thing to do. But it was a really interesting, serious groundwater problem. So I started working on it before I even had funding." -Charles F. Harvey, MIT assistant profesor of civil and environmental engineering
Credits: Photo / Volker Niedan

Caption:
"It was kind of a crazy thing to do. But it was a really interesting, serious groundwater problem. So I started working on it before I even had funding." -Charles F. Harvey, MIT assistant profesor of civil and environmental engineering
Credits:
Photo / Volker Niedan

A ruthless killer in Bangladesh's drinking water is making millions of people sick and may be causing as many as 3,000 deaths each year. That killer--naturally occurring arsenic in the water drawn from family wells--appears to have been released through a process involving crop irrigation, at least in one part of the country.

At a research site in the southern part of Bangladesh, scientists calculated that irrigation pumping, which began in the last several decades, has dramatically altered groundwater flow through the aquifer. They show that the resulting changes to the chemistry of the groundwater have the potential to either increase or decrease arsenic levels, in a paper written by an MIT-led team of scientists in the Nov. 22 issue of Science.

"Our data indicate that the arsenic was mobilized largely by degradation of dissolved organic carbon by microbes. Some of the organic carbon appears to have been drawn into the aquifer by irrigation pumping," said Charles F. Harvey, assistant professor of civil and environmental engineering at MIT and lead author of that paper. "But the effects of irrigation are complex, probably lowering arsenic concentrations in other areas. Curtailing irrigation pumping is not a solution."

Harvey is also an author of a research paper providing an epidemiological analysis of arsenic-induced illness throughout Bangladesh. That paper will appear next year in the Water Resources Research journal published by the American Geophysical Union. In it, the authors conclude that replacing 31 percent of the country's most tainted wells with deeper wells will eliminate about 70 percent of the illness, assuming that arsenic levels remain low in the deep wells.

Arsenic poisoning, usually characterized by sores on the chest, or blackened knotty palms, and cases of skin, lung, liver, bladder and pancreas cancers have been linked to arsenic in the drinking water. In 1998 the World Bank agreed to provide Bangladesh a $32.4 million credit to develop a method of controlling the arsenic. But today, most Bangladeshis continue to drink arsenic-laced water. The World Bank describes the problem as one of the world's primary environmental challenges. The World Health Organization refers to it as "the largest mass poisoning of a population in history" in a fact sheet published in March.

The mass poisoning began, sadly enough, with a well-meaning attempt to provide clean drinking water for Bangladeshis, who suffered from cholera and other diseases caused by bacteria in water taken from surface reservoirs. To remedy that problem, the Bangladesh government, with the help of international aid organizations, drilled between 6 and 10 million wells at depths ranging from 50 to 300 feet to provide clean, safe water for individual households.

At about the same time, farmers in this largely rural country began irrigating land so that rice, the country's main food staple, could be grown during all six of the dry months when monsoon flooding abates.

Cholera deaths dropped. But about 10 years into the use of the tube wells, villagers started displaying symptoms consistent with arsenic-related illnesses, and incidents of skin cancer and internal cancers became common.

It is widely believed that the arsenic was transported on sediment into the Ganges delta from the Himalayan mountains, which border Bangladesh on the north. What scientists don't know is how the arsenic is released into water in the aquifers in such great quantities. WHO's guideline for a maximum amount of arsenic in drinking water is 10 parts per billion (ppb). Many of the wells in Bangladesh measure more than 50 ppb, though arsenic levels vary from well to well. If the arsenic is in the aquifer only at certain levels, then digging even deeper wells might solve the problem.

The Harvey research team selected a site 30 km south of the nation's capital city, Dhaka, and 7 km north of the Ganges River. They installed 17 research wells about 4 meters apart at depths ranging from 5 to 165 meters, and collected three sediment cores, determining that the sediment was typical of southern Bangladesh.

They did not find peat, which has been associated with dissolved arsenic, but did find a fairly even distribution of solid arsenic in a variety of forms. To determine whether it was this arsenic that was mobilized in the aquifer, and figure out how that might have happened, the scientists injected test substances into their sampling wells, then took water samples to see how the water was affected.

One such test substance injected through the tube wells into the aquifer is molasses, which is rich in organic carbon. In water samples taken over several months, they found that arsenic levels quickly rose, as the organic carbon or its degradation products mobilized arsenic from the sediment. Injections of nitrate and oxygen-rich water provided further data, showing that arsenic levels can drop quickly after introduction of an oxidant.

What remained was to find the source of the carbon.

Harvey's team used radiocarbon dating to determine the age of the carbon isotopes in the groundwater at various depths. They found that very young and very old carbon were mixed, and concluded that water had carried young organic carbon (probably derived from untreated waste on the surface) deep into the aquifer.

ADDING UP THE NUMBERS

The second research project was the first detailed statistical analysis of the epidemiology of the health effects of arsenic in Bangladesh's groundwater. Using geostatistical methods, the scientists constructed a map of arsenic concentrations that divides Bangladesh into regions and estimates trends in arsenic concentration at various depths. Using census data to estimate exposure distributions in the regions, and epidemiological data from West Bengal and Taiwan--countries where the effects of arsenic poisoning from drinking water have been well-documented--they estimated what dose of arsenic makes people sick.

The scientists predict that long-term exposure to present arsenic concentrations will result in approximately 1.2 million cases of hyperpigmentation, 600,000 cases of keratosis, 125,000 cases of skin cancer and 3,000 fatalities per year from internal cancers.

"These numbers are highly uncertain," said Harvey. "We put together available databases to see what they imply, but the dose-response models for Bangladesh remain very rough."

The authors conclude that by replacing a selected 31 percent of the country's most-affected wells with deeper wells, arsenic poisoning and arsenic-induced cancers would be reduced by about 70 percent, assuming that arsenic concentrations in deep wells remain low.

"If the arsenic levels remain low at greater depths, and I think they will, then deeper wells are a good solution. But this should be studied," said Harvey, who added that the best immediate solution is to filter the water.

Solving the arsenic problem in Bangladesh could also help people in other countries, such as those along the Mekong River delta in Vietnam, Laos and Cambodia, where high arsenic levels in drinking water and crop irrigation are becoming common.

Funding for the epidemiology paper was provided by the National Science Foundation (NSF), the Environmental Protection Agency and the Alliance for Global Sustainability. Co-authors are Winston Yu (lead author), a graduate student at Harvard University, and Harvey's father, Charles M. Harvey, who was a visiting scholar at Harvard University's School of Public Health at the time.

The field research in Bangladesh was funded by NSF and the Alliance for Global Sustainability, although Harvey began the work in 1999 without waiting for funding. "It was kind of a crazy thing to do. But it was a really interesting, serious groundwater problem. So I started working on it before I even had funding," said Harvey, who recalls first learning about the problem from news reports. He contacted an MIT alumnus, Shafiqul Islam, now a faculty member at the University of Cincinnati. Islam, a Bangladeshi by birth, agreed to accompany Harvey to Bangladesh, where they made contacts at the Bangladesh University of Engineering and Technology (BUET) and began field work in September that year. The Bangladesh Water Development Board drilled the wells for the scientists.