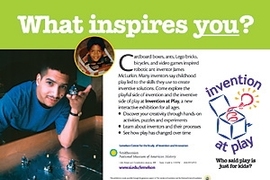 ↓ Download Image
Caption: Graduate student James McLurkin is featured on this diorama placed in two of Washington D.C.'s busiest Metro stations - Federal Center and Union Station - during September. It will be back again in December. Approximately 55,000 people come through each station daily.

Caption:
Graduate student James McLurkin is featured on this diorama placed in two of Washington D.C.'s busiest Metro stations - Federal Center and Union Station - during September. It will be back again in December. Approximately 55,000 people come through each station daily.

James McLurkin, ant farmer and creator of robotic ants and other small things in droves, is living large on a subway poster in Washington, D.C.

McLurkin, a graduate student who designs and builds swarms of tiny robots that work together, is one of the subjects of a Smithsonian Institution exhibit titled "Invention at Play." The subway poster, really a lighted diorama advertising the exhibit, features a photo of McLurkin with his ants and a childhood photo of him grinning inside a cardboard box. The traveling exhibit, sponsored by the Lemelson Center for the Study of Invention and Innovation, runs through Dec. 29 at the National Museum of American History.

A 1995 MIT News Office story about his robotic ants generated loads of attention from local and national media, with stories appearing in Design News, Science, Discover and on the Discovery Channel, among other places. He will appear on "60 Minutes" later this year.

It's clear that people are interested in his big ideas, even though the ideas wind up as miniscule inventions.

"I've always liked really cute and small things, like Matchbox cars. As an undergrad I was really fascinated by building really tiny things," he said. His first robot measured less than a cubic inch. "Goliath could bump off walls and move toward light. It was built the way undergrad projects are: I started with a wheel and went to the shop and just kept going. I made lots of mistakes," said McLurkin, who has a peripatetic history of work and study.

He finished the work for his S.B. in electrical engineering in 1994, stayed at MIT another year to get a minor in mechanical engineering, worked next in the Artificial Intelligence Lab with Professor Rodney Brooks, director of the lab, then went to the University of California at Berkeley, where he earned an M.S. in electrical engineering before realizing he didn't want to be an electrical engineer. So McLurkin returned to Boston as lead research scientist at iRobot in Somerville, a spinoff from the AI Lab, where he designs and builds tiny swarm robots. He's now working on his S.M. and Ph.D. in computer science at MIT.

"For my master's thesis, I'm going to write up my 'stupid robot tricks' into a coherent piece, a collection of all the different things I've done with different robots," he said. "For my Ph.D., I'm going to get heavy into the theory of how you get a computer to take a group goal and deconstruct it into tasks for a swarm of small robots."

And what might you do with a swarm of tiny robots?

"Take, for example, exploring Mars. Eight years ago we sent one robot. Wouldn't it be great to send 50 to Mars?" said McLurkin. "One of the obvious things you want a bunch of little robots to do is spread out. But you don't want them to really spread out [too far] because they need to communicate. Essentially you want each little robot to be its own cell phone and its own tower.

"Say the big robot knows that a small robot found something cool. You want the big robot to tell the science-equipment robot to go to where the small robot is. How? Use the swarm as a map, like a trail of bread crumbs. Then they can cluster around the found thing, carry it home and so forth," said McLurkin, who at one time was working with a Harvard biologist to better understand living systems and borrowed an ant farm to study the ants.

"When you want to build a system that has thousands of agents, it's very easy to get stumped. But through local communication you get an extraordinarily complicated network," he said.

The swarm robots McLurkin's currently working on are four and a half inches on a side, making them "125 times larger and immensely more powerful" than the ant robots of his undergraduate years, he said. The swarm robots are sophisticated enough to to determine the position, range and bearing of their neighbors, and have other qualities of a top-notch mountaineer. Each has a 32-bit 40MHz processor with 3 MB of flash memory and 1 MB of RAM, bump sensors, light sensors, top-mounted status LEDs, a self-charger, a radio modem and a 1.1 watt audio system. They will eventually have food sensors, trail sensors and a camera, McLurkin said.

The young inventor credits his father for teaching him at an early age how to work with mechanical objects.

"Anything that was broken was taken apart and fixed. The image that objects were static things that can't be changed was shattered a long time ago," said McLurkin, who comes from Baldwin, N.Y.

His father, once a "full-time corporate American in telecommunications," is now working on small construction projects and "having a lot more fun," said McLurkin. "My father keeps asking me when I'm going to get a real job. But then I'd have a shirt with a collar and wear pants I'd have to get dry-cleaned, and write reports."

"Invention at Play" tells the stories of several inventors, including McLurkin and Akhil Madhani (Ph.D. 1997), who won the Lemelson Student Award when he was a graduate student in the AI Lab. According to the exhibit's web site, "it departs from traditional representations of inventors as extraordinary geniuses who are 'not like us' to celebrate the creative skills and processes that are familiar and accessible to all people."

A version of this article appeared in MIT Tech Talk on October 23, 2002.