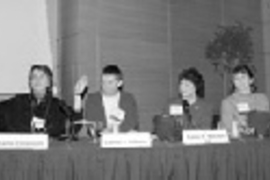 Preliminary results of a study on women faculty in the School of Engineering show that a common concern is balancing career and family.

About half the School's women faculty don't have children, said Professor Lorna J. Gibson, chair of the study. "Many feel that it's difficult for women to have this career and a family," she said.

Professor Gibson, who holds appointments in three MIT engineering departments, introduced the results last Wednesday at a panel discussion on women in science and engineering.

The discussion also elicited hearty support from the audience for a similar study released last year on the status of women faculty in the School of Science. Both the dean of engineering at Cambridge University in England and a professor at Technion University in Israel said that the latter work also describes the situations at their respective institutions, and has been closely studied.

Professor Chisholm introduced the panel's topic by applauding the overall increase in women on campus. To that end, she told a tale about a wealthy 1965 MIT alumnus who was being given a tour of the campus. After watching all the women streaming by, he commented, "Is there a women's conference going on?"

She firmly believes, however, that "what we need is more time. If we come back in 20 years, we'll see more women in management and as full professors."

Is there something limiting the numbers of women succeeding in academia? The School of Science report showed "subtle, unintentional discrimination that was interfering with the success of women rising through the ranks," said Professor Chisholm, one of the report's authors. The full report, which was embraced by the MIT administration, is on the MIT Faculty Newsletter web site.

A draft report of a study for the School of Engineering modeled after the School of Science work should be ready by the end of the Spring term, Professor Gibson said. In the meantime, she reported a few of the findings so far, which are based on interviews with almost all of the women faculty and on data for things such as tenure success rate and years from tenure to full promotion.

The interviews revealed concerns surrounding three main issues: family, mentoring and promotion, and interactions within the department. With respect to family, Professor Chisholm related how one faculty member told her "my opportunity for having children is past, and that's the penalty I pay for getting tenure at MIT."

Professor Gibson later recalled a lunch she attended for women faculty and students in the Department of Materials Science and Engineering. One of the students' key questions: how do you balance career and family? "But none of us has children," said Professor Gibson. "And you could just see all these students crossing off professor [as a career track]."

Many women faculty felt a lack of feedback or advice from colleagues in the department. The women also said that they're uncomfortable with the self-promotion necessary to get ahead. Said one: "I toot my own horn, but I feel like I have to take a shower afterward."

Within their departments, "there was a feeling by some of exclusion from influential committees," Professor Gibson said. "And quite a few talked about the small number of female faculty." There are only 31 women in an engineering faculty of 340. As a result, some departments have only a few women and one has none.

There is also good news. From the data collected so far, the team has found that the tenure success rate for faculty members hired between 1977 and 1993 was almost identical for men and women. Women faculty also were appointed to named chairs in proportion to their fraction of the faculty.

The team is still analyzing salary data, but with respect to outside activities, it found that until this year no women faculty members in the School of Engineering had startup companies. Now three do.