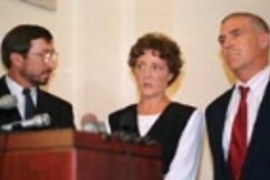 ↓ Download Image
Caption: Darlene and Robert Krueger (right) held a press conference last week to announce a settlement with MIT regarding the alcohol-induced death of their son, freshman Scott Krueger, at a fraternity party three years ago. The Kruegers are shown with their lawyer, Leo Doyle (left), who arranged the press conference.
Credits: Photo / Donna Coveney

Caption:
Darlene and Robert Krueger (right) held a press conference last week to announce a settlement with MIT regarding the alcohol-induced death of their son, freshman Scott Krueger, at a fraternity party three years ago. The Kruegers are shown with their lawyer, Leo Doyle (left), who arranged the press conference.
Credits:
Photo / Donna Coveney

MIT has reached an agreement with the parents of Scott Krueger, the MIT freshman who died from alcohol poisoning at a Phi Gamma Delta "Animal House Night" hazing event in Boston in September 1997.

The agreement resolves all legal issues between MIT and the Kruegers. MIT will contribute $1.25 million for scholarships to be established by Mr. and Mrs. Krueger in Scott's name and will pay them $4.75 million to be used as they determine.

Leo V. Boyle, the Krueger family's attorney, said the agreement was reached "in a powerful, honest, emotional and healing face-to-face meeting recently outside of Buffalo, NY, between the Kruegers and MIT President Charles Vest." Mr. Boyle announced the agreement in a news conference with Scott's parents, Robert and Darlene Krueger, on Wednesday, Sept. 13 at the Boston offices of the Massachusetts Bar Association.

President Vest, in a separate statement to the MIT community, wrote: "I am very grateful to have had the opportunity to sit down with Scott's parents and work out an arrangement that will bring some lasting benefit out of this tragic event. With this agreement, we can now move on with the healing process."

In a public letter to the Kruegers, Dr. Vest wrote, "At a very personal level, I feel that we at MIT failed you and Scott. For this you have our profound apology.

"The death of Scott as a freshmen living in an MIT fraternity shows that our approach to alcohol education and policy, and our freshman housing options, were inadequate. I am deeply sorry for this," Dr. Vest wrote.

"Scott's death galvanized us to action. It impelled us to greatly intensify our consideration and accelerate our actions with regard to alcohol, our housing system and other issues of student life and learning. Starting in 2002, when additional housing has been constructed, all of our freshmen will be required to live for their first year in residence halls. Our approach to alcohol education as well as to policies regarding its use -- and their enforcement -- have been greatly strengthened. We are building a stronger sense of community and community responsibility. All this takes longer than I would like and will never be perfect, but MIT is, and will be, a better institution for having undertaken substantial change," Dr. Vest wrote.

According to Dr. Vest, Professor Rosalind Williams, who served as MIT's Dean of Undergraduate Education and Student Life during the last five years, contributed substantially to the achievement of this settlement.

At the news conference, Mr. Boyle said, "This settlement could not have been reached without the great courage, commitment, humanity, forbearance and decency on the part of this extraordinary family whom it has been my immense professional privilege to know and to represent."

"Nor would this settlement have been reached without the character, compassion, humanity of MIT President Charles Vest. Darlene and Bob Krueger feel and hope that their commitment and this settlement will forever elevate and change the debate about university responsibility for alcohol abuse and hazing on campuses.

"Darlene and Bob Krueger hope and pray that Scott did not die in vain, that out of this nightmare some good has come, and that this is the beginning of the end of hazing and alcohol-related deaths and injuries on campuses in this country," Mr. Boyle said.

The attorney said "fundamental positive" changes have been announced at MIT over the past three years, citing new housing, rush changes, resident advisors, police patrol of Boston fraternities and aggressive strengthening of alcohol policies and enforcement.

President Vest announced in October 1997 that a new residence hall would be built. All MIT freshmen, it was announced in August 1998, will be required to live in university-supervised residence halls once the residence hall is finished in 2001 -- a goal that was delayed until 2002 by external circumstances. With that change in 2002, fraternity and sorority rush will no longer take place during freshman orientation.

Non-undergraduate resident advisors began living in fraternities and sororities two years ago, and MIT police began to patrol Back Bay fraternities in February 1999.

In 1998, MIT announced a system of citations and sanctions for alcohol violations, with punishment ranging from a talk with a dean to a fine of $1,500 and expulsion.

MIT also distributes "Facts about Alcohol" wallet cards to every freshman (see below), describing the signs of dangerous drinking (quick consumption of a large quantity of alcohol, stumbling, slurred speech, vomiting), instructions on what to do and phone numbers to call. The cards are good for a 25-cent discount on any beverage (non-alcoholic) at the 24-hour Student Center coffeehouse.

Mr. Boyle said the mediation process took place at the end of August, near the Kruegers' home in Buffalo. "Dr. Vest is and was an extraordinary person at the face-to-face mediation," said Mr. Boyle. "What it came down to was people looking at each other sitting at the same table and expressing how they felt about what had happened. The Kruegers were very direct and honest in how they felt, and Dr. Vest, to his great credit, didn't duck and didn't deny and accepted responsibility and apologized straight up to the Kruegers. Without that, this case never would have been settled," Mr. Boyle said.

Mrs. Krueger told the 35 news people that what made the agreement possible was "President Vest's own commitment on behalf of himself as well as MIT to change something there; so did his admittance to the problems of their housing and alcohol policies and attempts to change that."

Mr. Krueger added, "After our meeting with Dr. Vest face to face, we believe that if it's within his power things will be changed, because he was very sincere to us and we believe him."

Mrs. Krueger said, "Our son cannot be replaced. No agreement can replace him. But we hope colleges will address problems on their campuses and that parents will be more aware of problems before something happens," she said.

Mr. Krueger added, "When our son died, we tried to see what good we could bring out of it. We wanted to bring the attention where it is due. Maybe another death can be prevented."

Mrs. Krueger concluded, "We don't know our exact future plans. I know I'm not going to consume the rest of my life with what has gone on. There has to be some end, and some finality to what went on with my son. He will live with us forever but we can't continue to pursue things on behalf of what has happened in the past. We have to go on with life."

Mr. Boyle said litigation will be filed shortly involving the local chapter and the national chapter of Phi Gamma Delta. The local chapter was indicted for manslaughter and hazing in September 1998. Those charges remain pending because the fraternity chapter dissolved itself after the indictments, and no one appeared on behalf of the fraternity for the arraignment on the charges. The fraternity has been permanently banned from MIT.

A version of this article appeared in MIT Tech Talk on September 20, 2000.