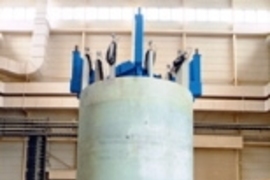 ↓ Download Image
Caption: The inner module of a superconducting magnet built by the US team (left picture), with magnet team members including Rui Vieira of MIT (far left); and the outer module built by the Japanese team (center picture). At right is a cutaway drawing of the full assembly of both modules combined with the structure provided by the US.
Credits: Photos / Japan Atomic Energy Research Institute 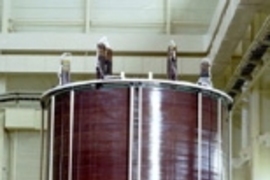 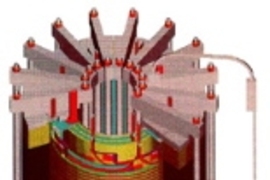 Caption:
The inner module of a superconducting magnet built by the US team (left picture), with magnet team members including Rui Vieira of MIT (far left); and the outer module built by the Japanese team (center picture). At right is a cutaway drawing of the full assembly of both modules combined with the structure provided by the US.
Credits:
Photos / Japan Atomic Energy Research Institute

A 150-ton magnet crucial to an international experiment for fusion energy research has passed its initial operating test, MIT engineers and colleagues from the United States and Japan report.

Recently the device, located in Japan, was run under full operating conditions. It produced a magnetic field of 13 tesla (about 260,000 times more powerful than the earth's magnetic field) with a stored energy of 640 megajoules at a current of 46,000 amperes (about 3,000 times the current handled by typical household wiring).

The overall purpose of the magnet is to demonstrate superconducting performance parameters and manufacturing methods for the larger magnets planned for the International Thermonuclear Experimental Reactor (ITER). ITER goals include demonstrating the feasibility of nuclear fusion as an energy source. The ITER magnets will provide the magnetic fields needed to initiate and sustain the plasma, or electrically charged gas, necessary for the fusion reaction.

Dr. Minervini said that over the next several months, the researchers hope to increase the speed at which they can reach the 13-tesla point and come back down from it. "The magnet is only doing its job for this particular magnetic fusion application when we're changing the magnetic field, so the faster we can do so the more effective the magnet," he said.

The magnet is composed of two modules: one was designed and built in the United States, the other in Japan. Last year the two were combined in Naka, Japan. The US magnet program was led by Dr. Raghavan Jayakumar (MIT visiting scientist from Lawrence Livermore National Laboratory ) and built by engineers from MIT, Livermore and the Lockheed Martin Corp., the prime industrial contractor. (Near the end of the project, the Lockheed Martin superconducting magnet group responsible for the ITER magnet work was sold to General Atomics.) The latter team was led by John Wohlwend. The Japanese module was built by Toshiba Corp. for the Japanese Atomic Energy Research Institute.

Many other countries also participated by providing some of the materials or manufacturing steps. For example, the superconducting wire used in the US part of the magnet was manufactured by Intermagnetics General Corp. (USA), Vacuumschmelze (Germany), and Furukawa and Mitsubishi (Japan).

"So this really was an international collaboration," Dr. Minervini said. "It shows that such a team can successfully design and deliver large-scale components that can be assembled and tested in an R&D program aimed at providing results for the benefit of all participants."

ITER partners are the European Union, Japan and the Russian Federation. The United States was a partner until late 1998 and is now participating in the testing of the magnet through a bilateral agreement with Japan.

One of the most significant results of the initial test is the remarkable stability of the magnet system in charging to full current and magnetic field. The charging was achieved without training or quenching&emdash;time-consuming procedures common in the early operation of many superconducting magnets.

"This has important implications for application of this technology to other types of electric power systems or high-field superconducting magnets," Dr. Minervini said.

The technology he referred to involves the arrangement of individual wires to form the magnet. More than 1,000 wires are twisted into six separate cables that in turn twist around a hollow tube. The whole arrangement is inside a square tube that's two inches on a side. The resulting device, known as a cable-in-conduit-conductor (CICC), is then wound into a coil resembling a giant spring that makes up the bulk of the magnet.

The initial concept for the CICC "was developed at MIT more than 20 years ago," Dr. Minervini said. "It is now the conductor of choice for large-scale magnets."

Some 20 PSFC researchers were involved in the work. "It was truly a team effort with everyone's contribution being important," he said. Those researchers include Dr. Richard J. Thome, who was head of the ITER Superconducting Coils Division in Japan for six years and responsible for the international coordination of superconductor and magnet R&D; and Rui Vieira, who played a key role on-site in Naka during the installation of the magnet.

Other key MIT personnel include Zibi Piec for final assembly of the US module at Lockheed Martin; David Gwinn, William Beck, Robert Childs, Chen-yu Gung, Eric Taylor and Brad Smith for fabrication operations at MIT; Frank Wong and Professor Ronald Ballinger for development of a key material; Thomas Hrycaj for engineering and subcontract coordination; and Peter Titus for structural analysis.

In addition, two MIT researchers are participating in the on-site testing in Japan. They are Makoto Takayasu and Philip Michael. The test group leader is Dr. Nicolai Martovetsky of Livermore. Other MIT researchers are analyzing test data through daily transfer of that data via the internet from the remote test-site computers.

Fabrication of the US portion of the magnet was funded by the US Department of Energy's Office of Fusion Energy Sciences, primarily through a multiyear grant to MIT. Other US industrial tasks were performed by more than 20 vendors.
More info: Status Summary for the CS Model Coil Testing -- PDF file, from the MIT Plasma Science and Fusion Center Technology and Engineering Division)

A version of this article appeared in MIT Tech Talk on May 3, 2000.