A day to celebrate teaching and learning 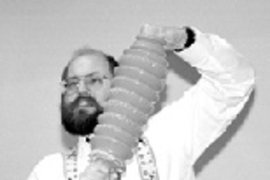 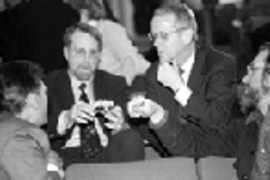 Caption:
Professor of Mechanical Engineering (and 1999 MacVicar Fellow) Alexander H. Slocum was part of MacVicar Day as he gave a presentation on teaching, which included finding educational uses for a plastic plunger.
Credits:
Photo / Donna Coveney

MacVicar Day 2000 culminated in a celebration and multimedia presentation on Margaret MacVicar's legacy to MIT and to vigorous creativity in education in general.

"Today we are here to celebrate great teachers, great teaching and a woman who was passionate about both. UROP was one of her greatest legacies to us," said Chancellor Lawrence Bacow at Friday's event.

Edie N. Goldenberg (SB 1967), professor of political science and public policy at the University of Michigan and a longtime friend and colleague of Professor MacVicar, presented a lecture titled, "Where's the Rat in Undergraduate Education?" She combined personal reminiscences of Professor MacVicar -- the two women were roommates in McCormick Hall -- with a portrait of her late friend's educational philosophy.

"When I think about Margaret MacVicar lecturing in 6-120, I can still see her standing on a bench to reach the higher blackboards. I can also still see the moment when she got so involved in what she was writing she fell right off the end of the bench," she said.

Professor Goldenberg described the tenets of Margaret MacVicar's educational philosophy: undergraduate education is MIT's core responsibility; it must have both breadth and depth; research experiences powerfully enhance learning; and every student is important.

A PHILOSOPHY IN FILM

"Margaret MacVicar personifies what is best about this place and in remembering her, we are reminded of the values at the heart of MIT," said Dean Randolph.

Remembering Margaret MacVicar featured comments by friends and faculty along with photographs of Professor MacVicar in the original UROP office.

The film was "very, very moving for those of us who knew her," said Rosalind H. Williams, dean of students and undergraduate education and chair of the MacVicar Fellows selection committee. Dean Williams introduced the MacVicar Fellows' teaching demonstrations and the UROP presentations.

The teaching demonstrations by Arthur Steinberg, professor of anthropology and director of the Integrated Studies Program, and Alexander Slocum, professor of mechanical engineering, put the "multi" in multimedia and would have delighted the UROP founder.

Professor Steinberg (who was named a MacVicar Faculty Fellow in 1995) handed out ticking alarm clocks, then challenged every group of five in the room to determine how the clocks functioned and what made accurate timekeeping so hard.

The groups were asked to consider the technology, culture and aggravation facing John Harrison (1673-1776), who worked for decades on developing a timekeeper to aid in sea navigation. He was also "something of a geek who had a lot of trouble with the professors, nobility and admirals on the Board of Longitude. He didn't receive his reward until a very few years before his death," Professor Steinberg said.

Teams studied the alarm clocks, discussed how to improve them and sent representatives (including President Charles M. Vest) to the blackboard to list their ideas.

"Some people say I'm scatter-brained. I just like everything," he said. "The idea in my lectures is to get kids to think about as much stuff as they can before they spontaneously combust with ideas and enthusiasm. I'm asking all the time, 'What gets students to have passion?'" He added that if students feel passion and ownership in their studies, they learn more efficiently and with less stress. He also emphasized the need for MIT to trust students to define more of their own undergraduate education.

As he tossed the plungers to audience members, Professor Slocum challenged the adults as he does his students in mechanical engineering.

"You've got three tasks here with these toys," he instructed the crowd. "One, come up with the best acronym to summarize everything we do in today's session. Two, figure out what educational toy you could make from these plungers. And three, answer how many engineering principles are exemplified by a plunger."

Professor Slocum peppered his talk with asides, including references to snowboarding, the federal government, the popular children's book If You Give a Mouse a Cookie, and slogans such as "never generalize" and "all zealots should be beaten."

In the end, the answers flew out: The acronym for everything was PAVE (Physical, Analytical, Visual Experience); the plunger could be an educational bubble-blower, and the engineering principles were mighty cool. They included, power calculations, hoop stress buckling and a demonstration of how the screw thread on the plunger handle provided enough force to easily balance the weight of the overhead projector.

The final segment of the afternoon session was dedicated to UROP. Dean for Undergraduate Research J. Kim Vandiver, professor of ocean engineering and director of the Edgerton Center, introduced MacVicar Fellows John M. Essigmann, professor of toxicology and chemistry, and Margery Resnick, associate professor of foreign languages and literatures.

Professor Essigmann described his own laboratory research, then introduced Millie Roy, a senior in biology who is completing her fourth year in UROP.

"Thanks to the satisfying, hands-on UROP experience, as a doctor in a clinical setting I will be better able explain to my patients the reality of their disease, of drug therapy and of drug resistance," she said.

Professor Resnick described the Women's Oral History Program, the inception and management of which was influenced directly by Professor MacVicar.

"This program has four purposes: to identify pathbreaker women from MIT; to document the presence of women in science and technology in the US; to portray their lives and the barriers they faced; and to expand our knowledge of MIT as an institution," she explained. The Oral History Program is funded by the Association of MIT Alumnae. UROP students conduct interviews for the program.

Professor Resnick showed a brief video featuring portraits of graduates of the Class of 1922 and an interview with Rellen Hardke (SB 1992), a former UROP student in the Oral History Program, who expressed wonder and frustration that she and her peers had so much in common with women students at MIT decades ago.

A version of this article appeared in MIT Tech Talk on February 9, 2000.