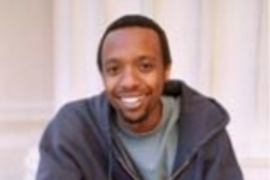 ↓ Download Image
Caption: Paul Njoroge, a graduate student in electrical engineering and computer science, initiated, planned and taught a summer computer course in his hometown of Kenya this year. He and several other students raised funds to get the project off the ground.
Credits: Photo / Donna Coveney

Caption:
Paul Njoroge, a graduate student in electrical engineering and computer science, initiated, planned and taught a summer computer course in his hometown of Kenya this year. He and several other students raised funds to get the project off the ground.
Credits:
Photo / Donna Coveney

At a time when MIT is opening the doors of collaborative programs in Ireland and England, one graduate student initiated a small partnership of his own this summer at a college in Nairobi, teaching a web programming course designed to acquaint his fellow Kenyans with the opportunities of e-commerce.

Paul Njoroge, a 24-year-old graduate student in electrical engineering and computer science who earned the SB in June, and three other MIT students and alumni taught a six-week Java course to college men and women at Strathmore College in Nairobi. One of the instructors, Eric Traub (SB 1999), also installed the LINUX operating system on Strathmore's computer network at the college's request and provided a one-week training program for the systems administrators.

Mr. Njoroge, Mr. Traub of Florida, Andrew Nevins, a graduate student in linguistics from California, and Kenyan Martin Mbaya (SB 2000) traveled to Nairobi in July after spending much of the previous six months planning the curriculum and raising the money for the project. Other students at MIT involved are Solomon Assefa, a graduate student in electrical engineering from Ethiopia who helped prepare the curriculum and will help with future planning, and Saria Hassan, a senior in biology and chemistry from Sudan who is helping to plan the next phase of the project.

Mr. Njoroge first envisioned the MIT Africa Internet Technology Initiative (AITI) while attending a Leadershape summer program after his sophomore year at MIT. He developed the idea with the help of Professor Paul Gray of electrical engineering, president emeritus of MIT. "We had to sit down and flesh out what I wanted to do. At the time, my ideas were very nebulous," said Mr. Njoroge. "I'd heard of the MIT-SETI program in China, and wanted to do something similar for Africa."

RETURNING TO THE OLD SCHOOL

Once the plan was fleshed out, Mr. Njoroge had to find a place to carry it out. He chose Strathmore in part because he and Mr. Mbaya, who now works for an Internet company in Chicago called TenFold, were familiar with it; they spent a year at the college before matriculating at MIT. (They are two of three students from Strathmore to be accepted by MIT to date.) But it also fulfilled the other qualifications: it had a computer lab and it was in a section of Nairobi equipped with a modernized digital telecommunication system containing the necessary bandwidth to handle the requirements of web work.

Although the students they taught at Strathmore were familiar with the Internet (the college offers an HTML course), they weren't necessarily aware of the opportunities it offers.

"The question is: When they're hooked up to the Internet, so what? They have to learn to use it as a resource," said Mr. Njoroge. "I want to show them it's possible not only to browse the web, but to create applications, for instance for e-commerce."

The top 45 students from the college -- roughly 50 percent men and 50 percent women -- were allowed to enroll in the Java course. Mornings were spent on theory and programming concepts; afternoons the students worked on problem sets. The 17-year-olds were divided into groups of five and asked to build or improve upon a web site for a local organization, such as a school or an NGO. The fifth week was devoted solely to work on those projects.

The course was a challenge for the students as well as the young instructors. "We went pretty fast at first and we could tell by their expressions that they were lost. The MIT firehose approach just wasn't effective," said Mr. Njoroge. "So we slowed down, gave more examples and then people started asking questions that indicated they were following us." Other lessons learned by the instructors include the need for printed, as opposed to online, reference materials (the computers couldn't be used after 7pm when the school closed) and a better student/teacher ratio.

The instructors brought in four professional web developers ("future Bill Gateses of Kenya," said Mr. Njoroge) to give one-hour talks about the industry. Those teachers introduced the students to the real world of e-commerce and offered a few part-time internships. Ayisi Makatiani (SB 1990), founder of the ISP provider Africa Online, presented certificates of completion at the closing ceremony. During the summer, the Nairobi Standard Daily, a local TV station and the East Africa weekly newspaper all ran stories about the course and its young initiators.

Following the work, the college treated the young instructors to a three-day safari in the Masai Mara, a region near the Tanzanian border about 250 kilometers from Nairobi.

Mr. Njoroge and the other AITI planners raised $45,000 to get the project off the ground. The 3-Com company, founded by Bob Metcalfe (SB 1969), developer of the Ethernet, donated nearly $27,000 worth of equipment for the Strathmore project. Other donors include Africa Online; Isaac Colbert, Dean of the Graduate School; Associate Provost Phillip Clay; the MIT International Science and Technology Initiatives program (MISTI); the Chancellors office; Professor and Mrs. Paul Gray; and Gordon Baty and Cathryn Baty, coordinator of the Hosts to International Student program at MIT.

The AITI team is now busy planning next summer's program between problem sets and tests. One possibility: teaching students from other schools or even other countries in Strathmore's computer lab. "We're thinking big right now. We're going to expand the proposal. We're going for big bucks," said Mr. Njoroge.

"When I saw the projects these students did and how they applied the things we taught them it was a feeling of exhilaration similar to what you'd get if you climbed Mt. Everest," he said. "We did do something."

A version of this article appeared in MIT Tech Talk on October 25, 2000.