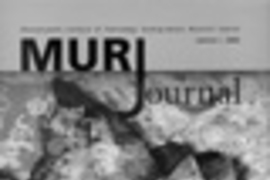 ↓ Download Image
Caption: The premiere issue of MURJ was published in January. The next issue is due out in May.

Caption:
The premiere issue of MURJ was published in January. The next issue is due out in May.

Earlier this semester, a group of undergraduates published their own magazine as a way of extending and sharing the kind of late-night conversations that occur among avid science and engineering students.

The journal's format was based loosely on that of Scientific American. Its layout and design was professionally done, and it shows. Its web site was designed by the student editor, and that shows, too; the web site's flashy graphics (made with Flash software) outshine many professionally created web sites.

The subject matter is meaty, with students tackling subjects like the interneural circuitry of the spinal cord, chromosomal aneuploidy in ovarian cancer, and k-sets. The editor's goal was to eliminate jargon as much as possible so that biology students could learn what's happening in physics labs and physics majors could learn about chemistry labs, for example.

"MURJ is essentially a detailed look into the types of material that provide the subject matter for late-night dorm discussions. We just put those discussions into text," said Sanjay Basu, a sophomore in brain and cognitive sciences who initiated the journal and served as its editor-in-chief. "I think the people involved are genuinely interested in looking at these problems carefully (that is the nature of MIT, after all) and finding good solutions."

One report, "Making Sense of Monet: Impressionism and Human Perception Theory," is art appreciation from the cognitive scientist's perspective. The author, electrical engineering and computer science (EECS) junior Jimmy Lin, wrote, "A human figure might be condensed into three brown brush strokes against a backdrop of yellow. In light of this, how can the human mind perceive objects from the heterogeneous paint field of impressionist paintings?"

Two juniors, Minhaj Siddaqui of chemical engineering and Roozbeh Ghaffari of EECS, wrote an article on "bluetooth," code name for a short-range radio wireless comunication initiative. According to the authors, Bluetooth was also the nickname of the 10th-century king who united the Danish kingdoms.

Another of the editorial board's goals was to get students involved in discussing science and society.

"We also want to allow students to debate scientific issues and have a larger perspective of science at MIT and in the rest of the world, particularly outside their academic discipline," said Mr. Basu. To this end, the next issue will have an essay on ethics and science, something to get people talking about different viewpoints on key ethical issues in science.

Mr. Basu credits Leslie Perelman of the Program on Writing and Humanistic Studies and Michael Bergren, assistant director of the Undergraduate Research Opportunities Program, for their advice and encouragement, and Chancellor Lawrence Bacow for partially funding the journal. Additional funding was raised by selling advertising. Other faculty members provided advice and criticism to the editors, and suggestions to the journal's submitters.

The magazine is distributed on campus free of charge. The next issue is due out May 12. Following that, it will appear once per semester.