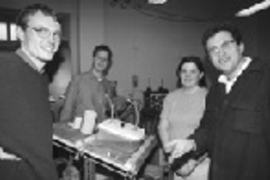 ↓ Download Image
Caption: Gathered around the table they developed to test and predict the stability of concrete over long periods of time are (left to right) postdoc Marc Mainguy; graduate student Franz Heukamp; Jennifer Butz, a junior in civil engineering; and Professor Franz Ulm. Concrete samples are treated on this seesawing table, immersed in the container at right. To the left are examples of concrete before immersion.
Credits: Photo / Donna Coveney

Caption:
Gathered around the table they developed to test and predict the stability of concrete over long periods of time are (left to right) postdoc Marc Mainguy; graduate student Franz Heukamp; Jennifer Butz, a junior in civil engineering; and Professor Franz Ulm. Concrete samples are treated on this seesawing table, immersed in the container at right. To the left are examples of concrete before immersion.
Credits:
Photo / Donna Coveney

Small cylinders of cement rolling to and fro in a gently rocking bath are key to MIT work that could aid efforts to safely contain nuclear waste.

Temporary measures for storing such waste already employ cement, a material that binds together small particles to make concrete. Concrete, in turn, is used to encase steel containers holding the waste. For permanent storage, however, researchers would like to be able to predict how the concrete -- specifically, the cement that makes it strong -- will weather over hundreds of years.

Engineers led by Franz-Josef Ulm, the Gilbert T. Winslow Career Development Associate Professor of civil and environmental engineering (CEE), have created a laboratory test that allows them to observe in one day what nature takes 300 years to accomplish. This accelerates concrete aging by a factor of three over what other researchers have achieved.

For the first time, the team also subjected the weathered materials to pressures from all sides, a situation closer to what could be expected in real life when concrete containers are buried underground. Other teams have just considered uniaxial, or one-dimensional, loading conditions.

The triaxial tests resulted in new insights on what happens to concrete when it is weakened and put under stress. They "show the importance of 'thinking 3D' when monitoring the durability performance of concrete in nuclear waste containment," Professor Ulm and colleagues write in a paper to be presented in May at a meeting of the American Society of Civil Engineers.

His coauthors are graduate student Franz H. Heukamp and Dr. John T. Germaine, a principal research associate (both of CEE). Two other key members of the team are Dr. Marc Mainguy, a CEE postdoctoral associate, and Jennifer Burtz, a junior in CEE working on the project through the Undergraduate Research Opportunities Program.

The team is currently merging the experimental results with a theoretical model of concrete leaching being developed by Dr. Mainguy. "Our goal is to go back to real-life structures, monitor the environment around them, and predict by model-based simulation what the concrete will do over extended periods of time," Professor Ulm said. And if a parameter changes -- for example, if groundwater begins to seep around the structure -- "we'll be able to predict its eventual effect, and intervene in time to slow down or reverse the aging."

The current lab test can comfortably predict aging up to about 300 years. Professor Ulm is confident that the work can be extrapolated to more than 1,000 years. "When, and if, spent nuclear fuel from the US is buried in the Department of Energy proposed repository at Yucca Mountain, it will be placed in concrete casks that are supposed to maintain integrity at least 300 to 1,000 years," said Mujid Kazimi, an MIT professor of nuclear engineering who Professor Ulm has consulted about the work.

In a process akin to osteoporosis, concrete can weaken over time when water leaches calcium from the material. Just as in bones, the calcium is what gives concrete its strength.

"The challenge in studying this is that concrete aging is a very slow process," Mr. Heukamp said. "It could take a couple hundred years to really dissolve a concrete structure." However, this is the time scale over which the structural integrity of concrete applied in nuclear waste containment must be ensured.

To accelerate the process, the MIT researchers replaced the water with a highly concentrated solution of ammonium nitrate. The beauty of that solution: "the chemical process of calcium leaching is still the same, but it occurs at a much higher rate," Mr. Heukamp said. Coupled with an oscillating table developed by Dr. Germaine, which ensures an even concentration of solution around each sample, the MIT researchers had their setup for accelerated material aging by calcium leaching.

The next step: expose the weathered materials to stress. To do so, the team placed samples into a triaxial high-pressure cell that applied pressure from all sides. When they applied a shear, or slightly larger stress from one side, slivers of the material slipped apart, much like what happens to a high pile of books if you drop something on it from slightly off center.

This was the first time a team has studied the behavior of weathered concrete under triaxial stress. A key insight: the researchers found a significant loss of frictional performance in the artificially aged cement paste. The leached calcium left large pores that collapsed under the pressure, allowing the material to slip apart.

Professor Ulm noted that the microstructure of the leached cement paste, as visualized with an environmental scanning electron microscope, "showed a strong similarity to that of osteoporotic trabecular bones.

"A material that is originally very strong ultimately ages to one that behaves like a weak low-friction soil, such as clay," he concluded.

The research was sponsored by the Nuclear Energy Research Initiative Program of the Department of Energy. Professor Ulm also notes a significant collaboration with the Commissariat ï¿½ï¿½ï¿½ï¿½ï¿½ï¿½ l'ï¿½ï¿½ï¿½ï¿½ï¿½ï¿½nergie Atomique in France through Dr. Jerome Sercombe.