MIT device could lead to near-term environmental improvements for cars 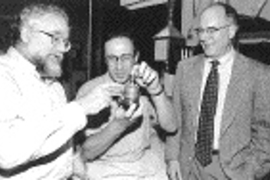 MIT engineers and colleagues are perfecting a device that could turn that foodstuff and various "biocrude" oils into fuel that could reduce the nation's dependence on foreign oil and decrease emissions of the greenhouse gas carbon dioxide. The same device could also significantly reduce the amount of smog-producing pollutants generated by vehicles running on traditional fuels.

All that from a contraption the researchers believe will be relatively inexpensive--only a few percent of the cost of a car or truck. They also believe that it could be introduced into present vehicle technology with only minor modifications, and that it will only need to be replaced a few times over the lifetime of a vehicle.

Essentially the device, which is about the size of a large soup can, works as an onboard "oil refinery." It converts a wide variety of fuels into high-quality hydrogen-rich gas. Adding only a small amount of such gas to the fossil fuel powering a car is known to make possible a significant decrease in emissions of pollutants like nitrogen oxides.

"This device might dramatically reduce air pollution from autos and trucks without a major increase in costs and inconvenience," said Daniel R. Cohn, a senior research scientist at the MIT Plasma Science and Fusion Center (PSFC). "The device has near-term applications. No major advances are needed in internal combustion engine design to incorporate it."

The new device is a kind of electrical gas heater known as a plasmatron. Fuel injected into the plasmatron is exposed to an arc of electricity that turns the fuel and surrounding air into an electrically charged gas, or plasma. The plasma accelerates reaction rates allowing the production of hydrogen-rich gas in a compact device--the plasmatron.

Plasmatrons have traditionally been used to produce hydrogen-rich gas for industrial applications like metallurgical processing. They are usually quite large--about the size of a car engine--and require large amounts of electrical power. "We're the first to develop a compact, low-power plasmatron," said Dr. Cohn. "To our knowledge no-one has created one that's this small (you can hold it in your hand) and that operates at low power (around one kilowatt)."

The researchers noted that conventional ways to produce hydrogen-rich gas involve devices that, among other limitations, are presently bulky, heavy, and can't effectively process biocrude oils. "They can basically do gasoline, methanol and, with a stretch, diesel," Dr. Bromberg said.

In contrast, the new plasmatron works well with a variety of fuels. "We've shown a very high degree of conversion (over 90 percent) of gasoline, diesel, and biocrude fuels into hydrogen-rich gas," Dr. Cohn said.

Although in principle the plasmatron could process all of the fuel for a vehicle, the researchers say that at present it's most cost-effective to convert only a fraction of the fuel into hydrogen-rich gas. That's because even though such gas increases the efficiency of an engine, the plasmatron itself consumes energy. "Processing a fraction of the fuel should prevent any decrease in net fuel consumption efficiency, and may in some cases improve net efficiency," Dr. Cohn said.

The researchers are currently working to increase the efficiency and yields of the plasmatron. They are also developing designs that will give a longer lifetime for the electrodes.

In a parallel effort, they are conducting experiments on the effects of hydrogen-rich gas on internal combustion engines. The original experiments to this end that found significant benefits to the use of such gas were conducted in the 70s. "We want to reexamine engine performance with hydrogen using modern engines," Dr. Cohn said.

The new plasmatron grew out of work conducted over 15 years ago by Dr. Rabinovich, who was then an engineer in the former Soviet Union. Drs. Rabinovich, Cohn and Bromberg have written several papers on this topic, and in 1995 received a patent on using the plasmatron in internal combustion engines.

The work is supported by the DOE Office of Heavy Vehicle Technologies. Dr. Cohn noted that "we'd been considering these applications for some time, but it wasn't until we received this DOE funding that we could really move forward to try to validate our concepts for vehicular applications."