A serious plea for playful design 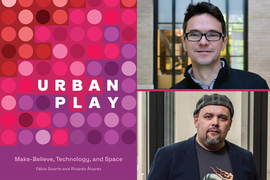 ↓ Download Image
Caption: In their new book, “Urban Play,” published by MIT Press, Fabio Duarte (top) and Ricardo Alvarez of DUSP make the case that urban design can and should be creative and playful.
Credits: Image: Courtesy of MIT Press, Duarte, and Alvarez

Caption:
In their new book, “Urban Play,” published by MIT Press, Fabio Duarte (top) and Ricardo Alvarez of DUSP make the case that urban design can and should be creative and playful.
Credits:
Image: Courtesy of MIT Press, Duarte, and Alvarez

In 2010, the city of Rio de Janeiro opened its Operations Center, a high-tech command post centralizing the activities of 30 agencies. With its banks of monitors looming over rows of employees, the center brings flows of information to city leaders regarding crime, traffic, and emergency preparedness, among other things, to help officials anticipate and solve problems.

That’s one vision of technology and urban life. Another, quite different vision of deploying technology debuted in Rio six years later, at architect Guto Requena’s Dancing Pavilion, built for the 2016 summer Olympics. The pavilion had a dance floor, banks of mirrors rotating in response to people’s movement, and lighting that changed according to the activity levels in the building. The goal was to enhance sociality and spontaneity.

Between these two alternate applications of large-scale technology in public places, MIT urban studies researchers Fabio Duarte and Ricardo Alvarez have a clear favorite: the Dancing Pavilion, and its ever-evolving interplay of people and the built environment, as opposed to the deployment of technology as a tracking tool monitoring urban systems.

“There is this notion of an optimal city where everything works perfectly well, where everything can be not only planned but also predicted,” Duarte says. “But in reality you cannot predict everything that happens. We should not remove from urban life the serendipity, all the things that happen by chance. Surprise is important for urban life.”

Now Duarte and Alvarez, researchers in MIT’s School of Architecture and Planning, have written a book making the case for using high-tech tools to enhance playfulness and creativity in urban environments. The book, “Urban Play: Make-Believe, Technology, and Space,” is being published this month by the MIT Press.

“The argument of the book is, we can use technology to bring back serendipity and fantasy in the design of cities,” says Duarte, a lecturer in MIT’s Department of Urban Studies and Planning, and a principal research scientist at MIT’s Senseable Cities Lab. “We are not putting technology aside. We can sustain the openness of urban life through technology.”

In the book, Duarte and Alvarez discuss multiple ways technology can make cities more playful places. Some cities, they observe, have play as a main rationale and express this through creative large-scale design — think Las Vegas, Orlando, or even Dubai, places designed around leisure.

Both Disneyland and Disney World, as Duarte and Alvarez detail in the book, embraced experimentalism in design and a belief that technology could create new urban forms — think of the Disney monorails, Tomorrowland, or Epcot.

“Walt Disney was deeply into city-making and tried to present future ways of living,” Alvarez says. “The original EPCOT Center wasn’t going to be a theme park. It was going to be a prototype city. At some point he saw very clearly that his vision, whether we like it or not, was resonating with people. Some architects may call it artifice or kitsch, but the fact of the matter is, people flock to these places. They use technology for purposes of pleasure and fun and storytelling.”

In another vein, the authors suggest that video games have much to offer in urban design, as the industry has developed increasingly sophisticated urban simulations across dozens of games in recent decades.

“The video game industry is similar to architecture and urban planning, in that they both create interactive spaces,” Alvarez observes. “Through time, [game developers] have learned a lot from architecture and planning. But in the virtual world they also have a lot more freedom to experiment, to take concepts and explore them to their ultimate form.”

Moreover, Alvarez notes, “What the gaming industry does is bring people and testers a lot earlier in the design stage. You get feedback from people and inject that into the design process. This is a very common process in the video game world that the planning and architecture fields could benefit from.”

The authors also suggest that virtual reality could emerge as a more robust design tool than people realize, by offering alternate perspectives to designers. A child, as they note in the book, views a playground in a park from a different than an adult does; virtual reality might similarly help some designers see space in new ways.

“Virtual reality is powerful for its perspective,” Duarte says. “Once you see this type of representation, you can start playing with the world in this way. When I can change completely how I perceive the world through this technology, how can I design the world differently?”

Duarte and Alvarez believe their ideas have received a fair hearing from urbanists and designers as they have been working on the book, and hope it will be read by people with an array of interests. Richard Florida, a university professor at the University of Toronto, has called the new work “a guidebook for getting us and our cities out of our regimented rut and a manifesto for building better cities and a better way of life.”

For their part, Duarte and Alvarez acknowledge that new technology is necessary to make urban infrastructure and system work well. But they hope it is viewed as a means of not only achieving efficiency but realizing urban vitality.

“Let’s try to use technology, not to try to predict the future, or create an optimized reality, but to explore different possibilities of living,” Duarte says. “I think we now have the chance to create new possibilities all the time.”

Autonomous boats can target and latch onto each other