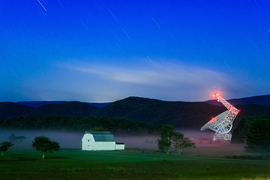 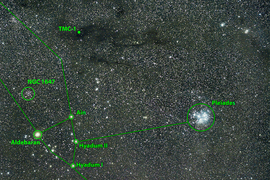 Much of the carbon in space is believed to exist in the form of large molecules called polycyclic aromatic hydrocarbons (PAHs). Since the 1980s, circumstantial evidence has indicated that these molecules are abundant in space, but they have not been directly observed.

Now, a team of researchers led by MIT Assistant Professor Brett McGuire has identified two distinctive PAHs in a patch of space called the Taurus Molecular Cloud (TMC-1). PAHs were believed to form efficiently only at high temperatures — on Earth, they occur as byproducts of burning fossil fuels, and they’re also found in char marks on grilled food. But the interstellar cloud where the research team observed them has not yet started forming stars, and the temperature is about 10 degrees above absolute zero.

This discovery suggests that these molecules can form at much lower temperatures than expected, and it may lead scientists to rethink their assumptions about the role of PAH chemistry in the formation of stars and planets, the researchers say.

“What makes the detection so important is that not only have we confirmed a hypothesis that has been 30 years in the making, but now we can look at all of the other molecules in this one source and ask how they are reacting to form the PAHs we’re seeing, how the PAHs we’re seeing may react with other things to possibly form larger molecules, and what implications that may have for our understanding of the role of very large carbon molecules in forming planets and stars,” says McGuire, who is a senior author of the new study.

Michael McCarthy, associate director of the Harvard-Smithsonian Center for Astrophysics, is another senior author of the study, which appears today in Science. The research team also includes scientists from several other institutions, including the University of Virginia, the National Radio Astronomy Observatory, and NASA’s Goddard Space Flight Center.

Starting in the 1980s, astronomers have used telescopes to detect infrared signals that suggested the presence of aromatic molecules, which are molecules that typically include one or more carbon rings. About 10 to 25 percent of the carbon in space is believed to be found in PAHs, which contain at least two carbon rings, but the infrared signals weren’t distinct enough to identify specific molecules.

“That means that we can’t dig into the detailed chemical mechanisms for how these are formed, how they react with one another or other molecules, how they’re destroyed, and the whole cycle of carbon throughout the process of forming stars and planets and eventually life,” McGuire says.

Although radio astronomy has been a workhorse of molecular discovery in space since the 1960s, radio telescopes powerful enough to detect these large molecules have only been around for a little over a decade. These telescopes can pick up molecules’ rotational spectra, which are distinctive patterns of light that molecules give off as they tumble through space. Researchers can then try to match patterns observed in space with patterns that they have seen from those same molecules in laboratories on Earth.

“Once you have that pattern match, you know there is no other molecule in existence that could be giving off that exact spectrum. And, the intensity of the lines and the relative strength of the different pieces of the pattern tells you something about how much of the molecule there is, and how warm or cold the molecule is,” McGuire says.

McGuire and his colleagues have been studying TMC-1 for several years because previous observations have revealed it to be rich in complex carbon molecules. A few years ago, one member of the research team observed hints that the cloud contain benzonitrile — a six-carbon ring attached to a nitrile (carbon-nitrogen) group.

The researchers then used the Green Bank Telescope, the world’s largest steerable radio telescope, to confirm the presence of benzonitrile. In their data, they also found signatures of two other molecules — the PAHs reported in this study. Those molecules, called 1-cyanonaphthalene and 2-cyanonaphthalene, consist of two benzene rings fused together, with a nitrile group attached to one ring.

“Detecting these molecules is a major leap forward in astrochemistry. We are beginning to connect the dots between small molecules — like benzonitrile — that have been known to exist in space, to the monolithic PAHs that are so important in astrophysics,” says Kelvin Lee, an MIT postdoc who is one of the authors of the study.

Finding these molecules in the cold, starless TMC-1 suggests that PAHs are not just the byproducts of dying stars, but may be assembled from smaller molecules.

“In the place where we found them, there is no star, so either they’re being built up in place or they are the leftovers of a dead star,” McGuire says. “We think that it’s probably a combination of the two — the evidence suggests that it is neither one pathway nor the other exclusively. That’s new and interesting because there really hadn’t been any observational evidence for this bottom-up pathway before.”

Carbon plays a critical role in the formation of planets, so the suggestion that PAHs might be present even in starless, cold regions of space, may prompt scientists to rethink their theories of what chemicals are available during planet formation, McGuire says. As PAHs react with other molecules, they may start to form interstellar dust grains, which are the seeds of asteroids and planets.

“We need to entirely rethink our models of how the chemistry is evolving, starting from these starless cores, to include the fact that they are forming these large aromatic molecules,” he says.

McGuire and his colleagues now plan to further investigate how these PAHs formed, and what kinds of reactions they may undergo in space. They also plan to continue scanning TMC-1 with the powerful Green Bank Telescope. Once they have those observations from the interstellar cloud, the researchers can try to match up the signatures they find with data that they generate on Earth by putting two molecules into a reactor and blasting them with kilovolts of electricity, breaking them into bits and letting them recombine. This could result in hundreds of different molecules, many of which have never been seen on Earth.

“We need to continue to see what molecules are present in this interstellar source, because the more we know about the inventory, the more we can start trying to connect the pieces of this reaction web,” McGuire says.

The research was funded by NASA, the Smithsonian Institute, the National Science Foundation, the Alexander von Humboldt Foundation, and the European Union’s Horizon 2020 research and innovation program.