Could we recycle plastic bags into fabrics of the future? 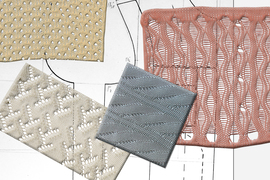 ↓ Download Image
Caption: MIT researchers design a new kind of sustainable textile from polyethylene fibers that may help humans adapt to and combat the effects of climate change.
Credits: Image: courtesy of the researchers

In considering materials that could become the fabrics of the future, scientists have largely dismissed one widely available option: polyethylene.

The stuff of plastic wrap and grocery bags, polyethylene is thin and lightweight, and could keep you cooler than most textiles because it lets heat through rather than trapping it in. But polyethylene would also lock in water and sweat, as it’s unable to draw away and evaporate moisture. This antiwicking property has been a major deterrent to polyethylene’s adoption as a wearable textile.

Now, MIT engineers have spun polyethylene into fibers and yarns designed to wick away moisture. They wove the yarns into silky, lightweight fabrics that absorb and evaporate water more quickly than common textiles such as cotton, nylon, and polyester.

They have also calculated the ecological footprint that polyethylene would have if it were produced and used as a textile. Counter to most assumptions, they estimate that polyethylene fabrics may have a smaller environmental impact over their life cycle than cotton and nylon textiles.

The researchers hope that fabrics made from polyethylene could provide an incentive to recycle plastic bags and other polyethylene products into wearable textiles, adding to the material’s sustainability.

“Once someone throws a plastic bag in the ocean, that’s a problem. But those bags could easily be recycled, and if you can make polyethylene into a sneaker or a hoodie, it would make economic sense to pick up these bags and recycle them,” says Svetlana Boriskina, a research scientist in MIT’s Department of Mechanical Engineering.

Boriskina and her colleagues have published their findings today in Nature Sustainability.

A molecule of polyethylene has a backbone of carbon atoms, each with a hydrogen atom attached. The simple structure, repeated many times over, forms a Teflon-like architecture that resists sticking to water and other molecules.

“Everyone we talked to said polyethylene might keep you cool, but it wouldn’t absorb water and sweat because it rejects water, and because of this, it wouldn’t work as a textile,” Boriskina says.

Nevertheless, she and her colleagues tried to make weavable fibers from polyethylene. They started with polyethylene in its raw powder form and used standard textile manufacturing equipment to melt and extrude polyethylene into thin fibers, similar to turning out strands of spaghetti. Surprisingly, they found that this extrusion process slightly oxidized the material, changing the fiber’s surface energy so that polyethylene became weakly hydrophilic, and able to attract water molecules to its surface.

The team used a second standard extruder to bunch multiple polyethylene fibers together to make a weavable yarn. They found that, within a strand of yarn, the spaces between fibers formed capillaries through which water molecules could be passively absorbed once attracted to a fiber’s surface.

To optimize this new wicking ability, the researchers modeled the properties of the fibers and found that fibers of a certain diameter, aligned in specific directions throughout yarn, improved the fibers’ wicking ability.

Based on their modeling, the researchers made polyethylene yarn with more optimized fiber arrangements and dimensions, then used an industrial loom to weave the yarn into fabrics. They then tested the wicking ability of polyethylene fabric over cotton, nylon, and polyester by dipping strips of the fabrics in water and measuring the time it took for the liquid to wick, or climb up each strip. They also placed each fabric on a scale over a single water droplet and measured its weight over time as the water was wicked through the fabric and evaporated.

In every test, polyethylene fabrics wicked away and evaporated the water faster than other common textiles. The researchers did observe that polyethylene lost some of its water-attracting ability with repeated wetting, but by simply applying some friction, or exposing it to ultraviolet light, they induced the material to become hydrophilic again.

“You can refresh the material by rubbing it against itself, and that way it maintains its wicking ability,” Boriskina says. “It can continuously and passively pump away moisture.”

The team also found a way to incorporate color into the polyethylene fabrics, which has been a challenge, again due to the material’s resistance to binding with other molecules, including traditional inks and dyes. The researchers added colored particles into the powdered polyethylene before extruding the material into fiber form. In this way, particles were encapsulated within the fibers, successfully imparting color to them.

“We don’t need to go through the traditional process of dyeing textiles by dunking them in solutions of harsh chemicals,” Boriskina says. “We can color polyethylene fibers in a completely dry fashion, and at the end of their life cycle, we could melt down, centrifuge, and recover the particles to use again.”

The team’s dry-coloring process contributes to the relatively small ecological footprint that polyethylene would have if it were used to make textiles, the researchers say. The team calculated this footprint by using a life cycle assessment tool commonly used by the textile industry. Taking into account polyethylene’s physical properties and the processes required to make and color the fabrics, the researchers found it would require less energy to produce polyethylene textiles, compared to polyester and cotton.

“Polyethylene has a lower melting temperature so you don’t have to heat it up as much as other synthetic polymer materials to make yarn, for example,” Boriskina explains. “Synthesis of raw polyethylene also releases less greenhouse gas and waste heat than synthesis of more conventional textile materials such as polyester or nylon. Cotton also takes a lot of land, fertilizer, and water to grow, and is treated with harsh chemicals, which all comes with a huge ecological footprint.”

In its use phase, polyethylene fabric could also have a smaller environmental impact, she says, as it would require less energy to wash and dry the material compared with cotton and other textiles.

“It doesn’t get dirty because nothing sticks to it,” Boriskina says. “You could wash polyethyelene on the cold cycle for 10 minutes, versus washing cotton on the hot cycle for an hour.”

“Though a surprising finding, I think the design of experiments and the data are quite convincing,” says Shirley Meng, a materials scientist at the University of California at San Diego, who was not involved in the research. “Based on the data presented in the paper, the particular PE fabric reported here depicts superior properties than those of cotton. The main point is that recycled PE can be used to make textile, a product with significant value. This is the missing piece of PE recycling and circular economy.”

The team is exploring ways to incorporate polyethylene fabrics into lightweight, passively cooling athletic apparel, military attire, and even next-generation spacesuits, as polyethylene shields against the harmful X-ray radiation of space.

This research was supported, in part, by the U.S. Army Research Office, the

UPI reporter Brooks Hays writes that MIT researchers have developed a new technique for turning plastic into a wearable material. “Engineers at MIT have managed to weave polyethylene into fibers that absorb and evaporate water more quickly than cotton, nylon, polyester and other common textiles,” writes Hays. “The authors of the new paper hope their technology will incentivize plastic recycling.”

BBC News reporter Helen Briggs writes that MIT researchers have developed a technique to create fabrics from polythene, a plastic found in food packaging and plastic bags. "There's no reason why the simple plastic bag cannot be made into fibre and used as a high-end garment," says research scientist Svetlana Boriskina. "You can go literally from trash to a high-performance garment that provides comfort and can be recycled multiple times back into a new garment."