How metals work together to weaken hardy nitrogen-nitrogen bonds 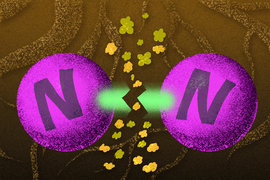 ↓ Download Image
Caption: MIT chemists have determined the structure of the complex that forms when gaseous dinitrogen, or N2, binds to an iron-sulfur cluster, offering clues as to how microbes (in yellow) use nitrogenases to break the nitrogen-nitrogen bond (in pink and green).

Caption:
MIT chemists have determined the structure of the complex that forms when gaseous dinitrogen, or N2, binds to an iron-sulfur cluster, offering clues as to how microbes (in yellow) use nitrogenases to break the nitrogen-nitrogen bond (in pink and green).
Credits:
Image: Jose-Luis Olivares, MIT

Nitrogen, an element that is essential for all living cells, makes up about 78 percent of Earth’s atmosphere. However, most organisms cannot make use of this nitrogen until it is converted into ammonia. Until humans invented industrial processes for ammonia synthesis, almost all ammonia on the planet was generated by microbes using nitrogenases, the only enzymes that can break the nitrogen-nitrogen bond found in gaseous dinitrogen, or N2.

These enzymes contain clusters of metal and sulfur atoms that help perform this critical reaction, but the mechanism of how they do so is not well-understood. For the first time, MIT chemists have now determined the structure of a complex that forms when N2 binds to these clusters, and they discovered that the clusters are able to weaken the nitrogen-nitrogen bond to a surprising extent.

“This study enables us to gain insights into the mechanism that allows you to activate this really inert molecule, which has a very strong bond that is difficult to break,” says Daniel Suess, the Class of ’48 Career Development Assistant Professor of Chemistry at MIT and the senior author of the study.

Alex McSkimming, a former MIT postdoc who is now an assistant professor at Tulane University, is the lead author of the paper, which appears today in Nature Chemistry.

Nitrogen is a critical component of proteins, DNA, and other biological molecules. To extract nitrogen from the atmosphere, early microbes evolved nitrogenases, which convert nitrogen gas to ammonia (NH3) through a process called nitrogen fixation. Cells can then use this ammonia to build more complex nitrogen-containing compounds.

“The ability to access fixed nitrogen on large scales has been instrumental in enabling the proliferation of life,” Suess says. “Dinitrogen has a really strong bond and is really unreactive, so chemists basically consider it an inert molecule. It’s a puzzle that life had to figure out: how to convert this inert molecule into useful chemical species.”

All nitrogenases contain a cluster of iron and sulfur atoms, and some of them also include molybdenum. Dinitrogen is believed to bind to these clusters to initiate the conversion to ammonia. However, the nature of this interaction is unclear, and until now, scientists had not been able to characterize N2 binding to an iron-sulfur cluster.

To shed light on how nitrogenases bind N2, chemists have designed simpler versions of iron-sulfur clusters that they can use to model the naturally occurring clusters. The most active nitrogenase uses an iron-sulfur cluster with seven iron atoms, nine sulfur atoms, a molybdenum atom, and a carbon atom. For this study, the MIT team created one that has three iron atoms, four sulfur atoms, a molybdenum atom, and no carbon.

One challenge in trying to mimic the natural binding of dinitrogen to the iron-sulfur cluster is that when the clusters are in a solution, they can react with themselves instead of binding substrates such as dinitrogen. To overcome that, Suess and his students created a protective environment around the cluster by attaching chemical groups called ligands.

The researchers attached one ligand to each of the metal atoms except for one iron atom, which is where N2 binds to the cluster. These ligands prevent unwanted reactions and allow dinitrogen to enter the cluster and bind to one of the iron atoms. Once this binding occurred, the researchers were able to determine the structure of the complex using X-ray crystallography and other techniques.

They also found that the triple bond between the two nitrogen atoms of N2 is weakened to a surprising extent. This weakening occurs when the iron atoms transfer much of their electron density to the nitrogen-nitrogen bond, which makes the bond much less stable.

Another surprising finding was that all of the metal atoms in the cluster contribute to this electron transfer, not only the iron atom to which the dinitrogen is bound.

“That suggests that these clusters can electronically cooperate to activate this inert bond,” Suess says. “The nitrogen-nitrogen bond can be weakened by iron atoms that wouldn’t otherwise weaken it. Because they’re in a cluster, they can do it cooperatively.”

The findings represent “a significant milestone in iron-sulfur cluster chemistry,” says Theodore Betley, chair of the Department of Chemistry and Chemical Biology at Harvard University, who was not involved in the study.

“Although the nitrogenase enzymes known to fix atmospheric nitrogen are composed of fused iron-sulfur clusters, synthetic chemists have never, until now, been able to demonstrate dinitrogen uptake using synthetic analogues,” Betley says. “This work is a major advance for the iron-sulfur cluster community and bioinorganic chemists at large. More than anything, this advance has shown that iron-sulfur clusters have a rich reaction chemistry yet to be discovered.”

The researchers’ findings also confirmed that simpler versions of the iron-sulfur cluster, such as those they created for this study, can effectively weaken the nitrogen-nitrogen bond. The earliest microbes to develop the ability to fix nitrogen may have evolved similar types of simple clusters, Suess says.

Suess and his students are now working on ways to study how the more complex, naturally occurring versions of iron-sulfur clusters interact with dinitrogen.

The research was funded by the MIT Research Support Committee Fund.

Paper: "Dinitrogen binding and activation at a molybdenum–iron–sulfur cluster"