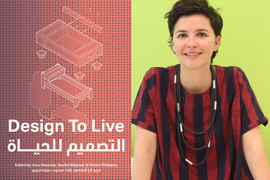 ↓ Download Image
Caption: MIT associate professor Azra Aksamija is co-editor of a new book, “Design to Live,” about the inventions and design efforts of Syrian refugees at the Azraq refugee camp in Jordan. 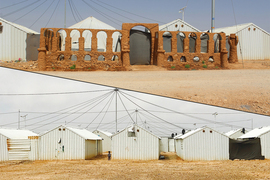 ↓ Download Image
Caption: Majid Al-Kanaan undertook a project to combat the visual and existential monotony of life at the Azraq refugee camp in Jordan. Using clay and stones from camp terrain, he built a colonnade of decorative arches in front of his shed.
Credits: Image courtesy of Azra Akšamija

Caption:
MIT associate professor Azra Aksamija is co-editor of a new book, “Design to Live,” about the inventions and design efforts of Syrian refugees at the Azraq refugee camp in Jordan.
Credits:
Photo: Angelika Mende

Caption:
Majid Al-Kanaan undertook a project to combat the visual and existential monotony of life at the Azraq refugee camp in Jordan. Using clay and stones from camp terrain, he built a colonnade of decorative arches in front of his shed.
Credits:
Image courtesy of Azra Akšamija

The Azraq refugee camp in Jordan hosts about 35,000 people displaced by the Syrian civil war, who live in rows of small white steel sheds. Several years ago, a camp resident named Majid Al-Kanaan undertook a project to combat the visual and existential monotony of camp life.

Using clay and stones from camp terrain, he built a colonnade of decorative arches in front of his shed, referencing the Arch of Triumph in Palmyra, Syria — and added elements alluding to Syria’s Citadel of Aleppo and the Umayyad desert palaces in Jordan.

“I was exploring what could be done with the sand and stone of this area,” Al-Kanaan says in a new book about life in the Azraq camp. The book was edited by an MIT-based team that worked with camp refugees on design projects for years.

As the team found, the Azraq camp is full of designers and builders who create objects despite having little to work with. Camp residents have used yogurt containers to build hanging gardens for plants, carved chess sets out of broom handles, made childrens’ toys from trash, and rigged up fountains from spare parts.

These projects “speak to the ingenuity of the human spirit,” says Azra Akšamija, an associate professor in MIT’s School of Architecture and Planning and a co-editor of the new book. “These inventions point to what is missing. People invent things because they are lacking.”

At the same time, she notes, the cultural and artistic aspects of these inventions are also critical: “Those are essential human needs, it’s not just food and a roof above your head.”

“The book is a case study about the refugee camp, but it goes beyond that,” Akšamija says. “It’s also about the conditions of scarcity, and this kind of agency of design and art in conditions of displacement, which inevitably face our global society in the future.”

Majzoub adds: “Through the dissemination of this work, we aim to contribute to the valorization and prioritization of social and cultural activities in crisis zones, moving beyond the established paradigm of ‘basic needs.’”

Roughly 6.6 million Syrians have fled the country since war broke out in 2011, according to the United Nations. The Azraq camp opened in 2014, and the MIT Future Heritage Lab, founded by Akšamija, began helping refugees study and practice art and design in 2017 (facilitated by the humanitarian organization CARE and in collaboration with professors and students from the German-Jordanian University in Amman).

“Design to Live” details inventions Azraq residents developed before working with the MIT team. The book has text in both English and Arabic, abundant illustrations, and sections where Syrian refugees offer their own views. The volume has a tête-bêche structure — facing pages are upside down relative to each other — offering the viewpoints of people living both inside and outside the camp.

“We are not speaking for refugees, but we are highlighting their voices, while incorporating these multiple perspectives,” Akšamija says. “We want to bring out the significance of the cultural and artistic processes in the healing of society.”

She adds: “It was eye-opening to see toy trucks made out of trash and a chessboard made out of broomsticks. That is really about cultural expression and making life worth living, feeling like a human being, addressing issues of memory and hopelessness and idleness.”

Many refugees improvised forms of water storage; the book has blueprints for a fountain made from buckets and a hose. Some Azraq residents, barred from growing things in the soil, have created vertical gardens outside their sheds — with planters made from yogurt containers, where they grow traditional recipe ingredients.

“It’s impressive,” says Akšamija. “It’s about literally bringing spice to life. Plants are a beautiful metaphor for migration of culture and food, and maybe people, too. And [they’re] a way of continuing your tradition through cooking. Good food is a very important dimension of Syrian culture. People have minimal means, but they cook. You get this most incredible food in the middle of nothing. Continuing your traditions is a way of sustaining and surviving.”

As Philippou notes, “The designs of our Syrian collaborators like the vertical garden, the fountain, and the decorative arches carve space for personal and collective expression,” while merging from conditions of “confinement, with limited resources and [often] against the regulative framework of the camp.”

As a section of the book titled “Intimacy” details, camp residents also built alternate, decorated entrance halls for their sheds; these transitional spaces limit direct views into houses from the street, to grant privacy to residents.

“Over time, we observed the impact of these designs on both other residents and NGOs,” Philippou says. “Fellow residents replicated and built upon the work of their neighbors, and NGOs adapted camp regulations to accommodate and support these popular designs. Syrian designers at the camp offer alternatives that feed back into evolving camp services on a systemic level.”

As Majzoub notes, “These designs are not singular or isolated but are rather parts of a complex process of sharing, co-creation, and world-making, where camp residents defy their realities, challenge the status quo, and create frameworks for cultural continuity in the harsh and sterile conditions of a standardized refugee camp in the middle of the desert.”

As Akšamija observes, creating objects is an act of resilience for refugees. Many camp residents are depressed, as they see no way out of their situation, but others find strength and inspiration in art and design. One elderly man making toys out of trash, Aksamija recollects, was “full of spirit, but I don’t know how.” His son is a camp resident who has been unable to find work elsewhere, despite being a professional engineer. Many people feel they “have nothing to do, no work, no future.”

Akšamija experienced war and forced displacement herself while growing up; her family fled Bosnia in the 1990s when war broke out, ultimately landing in Austria.

“In my own country, we had such an amazing life, and suddenly we had to start from scratch in a new place,” Akšamija says. “I think this can happen to anyone, and it’s important to think about it this way.”

Indeed, Akšamija says the ideas in the book are not only relevant to refugee camps; in a world of resource scarcity, where climate crisis and political strife are creating further dislocation, many people endure deep deprivation.

Moreover, most refugees remain in desperate circumstances. “It’s important not to exoticize these inventions,” Akšamija says. “It’s a brutal reality. We tried to show it. And we tried to show the power of art and design in creating a life worth living amid war, destruction, and displacement.”

In that vein, consider the colonnade of earthen arches at Azraq. Well-crafted as it was, the structure got destroyed by the elements within a few years. Only briefly, then, the arches “transformed the desert from a symbol of isolation to a place for the community and a medium for cultural expression,” as Akšamija, Majzoub, and Philippou write in the book.

Like everything, the structure was a transitory creation, vulnerable to collapse. In design, as in all areas of living, the Azraq refugees face a need for rebuilding and reconstruction, despite little support and enormous uncertainty.

“It’s life,” Akšamija says. “But it’s not like we say, ‘Oh, that’s how life is,’ and we accept it. Syrian refugees in Al Azraq camp showed us that we can and must do better to address the cultural and emotional needs of displaced people.”

Book: “Design to Live: Everyday Inventions from a Refugee Camp”

Prof. Azra Aksamija speaks with NPR’s Scott Simon about her book "Design to Live: Everyday Inventions from a Refugee Camp," which spotlights the inventions and designs created by Syrian refugees at the Azraq refugee camp in Jordan. “For me, you know, what's so powerful about them is they visualize, on the one hand, this ingenuity of human spirit, yes, and resilience but, on the other hand, really, what is missing because people invent what is not provided,” says Aksamija, “and what is not provided are basic ideas of what constitutes human - essential human needs.”

Refugee learners aim to lift up their communities

At the Venice Biennale, an architecture exhibition to meet the moment