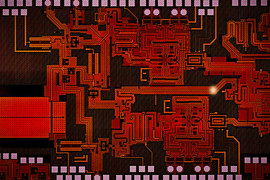 ↓ Download Image
Caption: Researchers have developed a data transfer system that pairs high-frequency silicon chips with a polymer cable as thin a strand of hair.
Credits: Image: courtesy of the researchers, edited by MIT News

Caption:
Researchers have developed a data transfer system that pairs high-frequency silicon chips with a polymer cable as thin a strand of hair.
Credits:
Image: courtesy of the researchers, edited by MIT News

Researchers have developed a data transfer system that can transmit information 10 times faster than a USB. The new link pairs high-frequency silicon chips with a polymer cable as thin a strand of hair. The system may one day boost energy efficiency in data centers and lighten the loads of electronics-rich spacecraft.

The research was presented at this month’s IEEE International Solid-State Circuits Conference. The lead author is Jack Holloway ’03, MNG ’04, who completed his PhD in MIT’s Department of Electrical Engineering and Computer Science (EECS) last fall and currently works for Raytheon. Co-authors include Ruonan Han, associate professor and Holloway’s PhD adviser in EECS, and Georgios Dogiamis, a senior researcher at Intel.

The need for snappy data exchange is clear, especially in an era of remote work. “There’s an explosion in the amount of information being shared between computer chips — cloud computing, the internet, big data. And a lot of this happens over conventional copper wire,” says Holloway. But copper wires, like those found in USB or HDMI cables, are power-hungry — especially when dealing with heavy data loads. “There’s a fundamental tradeoff between the amount of energy burned and the rate of information exchanged.” Despite a growing demand for fast data transmission (beyond 100 gigabits per second) through conduits longer than a meter, Holloway says the typical solution has been “increasingly bulky and costly” copper cables.

One alternative to copper wire is fiber-optic cable, though that has its own problems. Whereas copper wires use electrical signaling, fiber-optics use photons. That allows fiber-optics to transmit data quickly and with little energy dissipation. But silicon computer chips generally don’t play well with photons, making interconnections between fiber-optic cables and computers a challenge. “There’s currently no way to efficiently generate, amplify, or detect photons in silicon,” says Holloway. “There are all kinds of expensive and complex integration schemes, but from an economics perspective, it’s not a great solution.” So, the researchers developed their own.

The team’s new link draws on benefits of both copper and fiber optic conduits, while ditching their drawbacks. “It’s a great example of a complementary solution,” says Dogiamis. Their conduit is made of plastic polymer, so it’s lighter and potentially cheaper to manufacture than traditional copper cables. But when the polymer link is operated with sub-terahertz electromagnetic signals, it’s far more energy-efficient than copper in transmitting a high data load. The new link’s efficiency rivals that of fiber-optic, but has a key advantage: “It’s compatible directly with silicon chips, without any special manufacturing,” says Holloway.

The team engineered such low-cost chips to pair with the polymer conduit. Typically, silicon chips struggle to operate at sub-terahertz frequencies. Yet the team’s new chips generate those high-frequency signals with enough power to transmit data directly into the conduit. That clean connection from the silicon chips to the conduit means the overall system can be manufactured with standard, cost-effective methods, the researchers say.

The new link also beats out copper in terms of size. “The cross-sectional area of our cable is 0.4 millimeters by a quarter millimeter,” says Han. “So, it’s super tiny, like a strand of hair.” Despite its slim size, it can carry a hefty load of data, since it sends signals over three different parallel channels, separated by frequency. The link’s total bandwidth is 105 gigabits per second, nearly an order of magnitude faster than a copper-based USB cable. Dogiamis says the cable could “address the bandwidth challenges as we see this megatrend toward more and more data.”

In future work, Han hopes to make the polymer conduits even faster by bundling them together. “Then the data rate will be off the charts,” he says. “It could be one terabit per second, still at low cost.”

The researchers suggest “data-dense” applications, like server farms, could be early adopters of the new links, since they could dramatically cut data centers’ high energy demands. The link could also be a key solution for the aerospace and automotive industries, which place a premium on small, light devices. And one day, the link could replace the consumer electronic cables in homes and offices, thanks to the link’s simplicity and speed. “It’s far less costly than [copper or fiber optic] approaches, with significantly wider bandwidth and lower loss than conventional copper solutions,” says Holloway. “So, high fives all round.”

MIT scientists have demonstrated a plastic polymer cable that can transmit data 10 times as fast as USB, reports Payal Dhar for IEEE Spectrum. “For newer standards aiming at much higher data rates, we see the cables getting much thicker, more expensive, and commonly short [because of] technical challenges,” says Prof. Ruonan Han. “We hope this research could [enable] much higher speed for our needs.”

An LED that can be integrated directly into computer chips