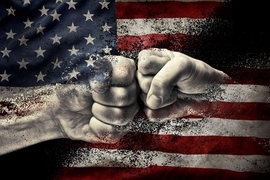 ↓ Download Image
Caption: A physics-based analysis of U.S. elections finds that the electorate has become more polarized over time, leading to an unstable situation in which very small chages in opinion can lead to wide swings in electoral outcomes.
Credits: Image: Christine Daniloff, MIT 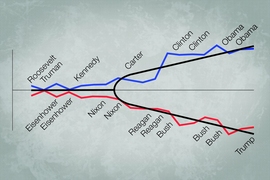 ↓ Download Image
Caption: Analyzing Republican and Democratic party platforms since 1944, the researchers found a dramatic increase in polarizing, divisive words used in those platforms, starting in 1970 and increasing since then, as shown in this graph. This has led to greater instability in election outcomes.
Credits: Image courtesy of the researchers

Caption:
A physics-based analysis of U.S. elections finds that the electorate has become more polarized over time, leading to an unstable situation in which very small chages in opinion can lead to wide swings in electoral outcomes.
Credits:
Image: Christine Daniloff, MIT

Caption:
Analyzing Republican and Democratic party platforms since 1944, the researchers found a dramatic increase in polarizing, divisive words used in those platforms, starting in 1970 and increasing since then, as shown in this graph. This has led to greater instability in election outcomes.
Credits:
Image courtesy of the researchers

It may seem surprising, but theories and formulas derived from physics turn out to be useful tools for understanding the ways democratic elections work, including how these systems break down and how they could be improved.

A new physics-based study finds that in the U.S., elections went through a transition in 1970, from a condition in which election results captured reasonably well the greater electorate’s political preferences, to a period of increasing instability, in which very small changes in voter preferences led to significant swings toward more extreme political outcomes in both directions.

The analysis also shows this instability can be associated with an unexpected situation in which outcomes swing in the opposite direction of how people’s true preferences are shifting. That is, a small move in prevailing opinions toward the left can result in a more right-wing outcome, and vice versa — a situation the researchers refer to as “negative representation.”

The findings appear in the journal Nature Physics, in a paper by Alexander Siegenfeld, a doctoral student in physics at MIT, and Yaneer Bar-Yam, the president of the New England Complex Systems Institute.

“Our country seems more divided than ever, with election outcomes resembling a pendulum swinging with ever increasing force,” Siegenfeld says. In this regime of “unstable” elections, he says, “a small change in electorate opinion can dramatically swing the election outcome, just as the direction of a small push to a boulder perched on top of a hill can dramatically change its final location.”

That’s partly a result of an increasingly polarized electorate, he explains. The researchers drew from a previous analysis that went through the Republican and Democratic party platforms in every presidential election year since 1944 and counted the number of polarizing words using a combination of machine learning and human analysis. The numbers show a relatively stable situation before 1970 but a dramatic increase in polarization since then.

The team then found that the Ising model, which was developed to explain the behavior of ferromagnets and other physical systems, is mathematically equivalent to certain models of elections and accurately describes the onset of instability in electoral systems.

“What happened in 1970 is a phase transition like the boiling of water. Elections went from stable to unstable,” explained Bar-Yam.

The increasing instability also results in part from the structure of party primary systems, which have greatly increased their role in candidate selection since the ’70s. Because the voters in primaries tend to have more extreme partisan views than those of the general electorate, politicians are more inclined to take positions to appeal to those voters — positions that may be more extreme than those favored by more mainstream voters, and thus less likely to win in the general election.

This long-term shift from a stable to unstable electoral situation closely resembles what happens to a ferromagnetic metal exposed to a magnetic field, Siegenfeld says, and can be described by the same mathematical formulas. But why should formulas derived for such unrelated subject matter be relevant to this field?

Siegenfeld says that’s because in physics, it’s not always necessary to know the details of the underlying objects or mechanisms to be able to produce useful and meaningful results. He compares that to the way physicists were able to describe the behavior of sound waves — which are essentially the aggregate motions of atoms — with great precision, long before they knew about the existence of atoms.

“When we apply physics to understanding the fundamental particles of our universe, we don’t actually know the underlying details of the theories,” he says. “Yet we can still make incredibly accurate predictions.”

Similarly, he says, researchers don’t need to understand the motives and opinions of individual voters to be able to carry out a meaningful analysis of their collective behavior. As the paper states, “understanding the collective behavior of social systems can benefit from methods and concepts from physics, not because humans are similar to electrons, but because certain large-scale behaviors can be understood without an understanding of the small-scale details.”

Another important finding from the study is the phenomenon of “negative representation.” This is when an overall shift to the left in voter opinions results in a rightward shift in the election outcome, or vice versa.

This can happen, for example, if voters are faced with a choice between a center-left candidate and a far-right candidate. If the overall sentiments of the electorate move further to the left, that may result in more far-left voters deciding to stay home on election day because the centrist candidate’s views are too far removed from their own. As a result, the far-right candidate ends up winning. Or, if a rightward swing in the electorate leads to the nomination of an extreme far-right candidate, that may increase the odds of a more liberal candidate winning the general election. “This negative representation undermines the entire purpose of democratic elections,” Siegenfeld says.

One such solution to reducing election instability would be a shift toward ranked-voting systems, such as those used in Australia, Maine, and the cities of San Francisco and Cambridge, Massachusetts. Such systems reduce the need to select “lesser of two evils” candidates, and allow people to vote for their real preference without the disruptions caused by third-party candidates, they say.

Another approach would be to increase voter turnout, either through incentives, publicity, or legislation (such as Australia’s required voting). The lower the percentage of voter turnout, the greater the potential for instability, the researchers found.

“Most people say ‘go vote’ so your voice is heard,” Siegenfeld says. “What is less appreciated is that when candidates can count on people voting, it is more likely that future elections will become more stable. Our research scientifically demonstrates that high voter turnout helps democracy, since low voter turnout destabilizes elections and results in negative representation.”

“I love this research,” says Soren Jordan, an assistant professor of political science at Auburn University in Alabama, who was not involved in this work and wrote a commentary piece in Nature about it. “The cross-over is exciting, and seeing physicists do mathematical heavy lifting that’s really outside of the traditional scope and training of political science really enhances both disciplines.”

He adds, “This model is an excellent heuristic for understanding some critical phenomena, like how slow-moving concepts like partisanship can still yield large-scale effects in aggregate outcomes.”

3 Questions: Heather Hendershot on the state of US political discourse