Suggested design could make it easier to divide air flow for Covid-19 patients in emergencies when no other options are available.
Anne Trafton | MIT News Office
Publication Date:
Press Inquiries 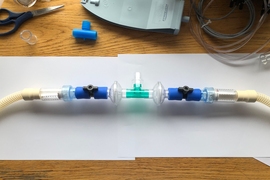 ↓ Download Image
Caption: Researchers from MIT and Brigham and Women’s Hospital have come up with a new approach to sharing ventilators between patients, which they believe could be used as a last resort to treat Covid-19 patients in acute respiratory distress.
Credits: Image courtesy of the researchers

Caption:
Researchers from MIT and Brigham and Women’s Hospital have come up with a new approach to sharing ventilators between patients, which they believe could be used as a last resort to treat Covid-19 patients in acute respiratory distress.
Credits:
Image courtesy of the researchers

As more Covid-19 patients experience acute respiratory distress, there has been much debate over the idea of sharing ventilators, which involves splitting air tubes into multiple branches so that two or more patients can be connected to the same machine.

Several physicians’ associations have issued a joint statement discouraging this practice. It poses risk to patients, they say, because of the difficulty in ensuring that each patient is receiving the right amount of air.

A team of researchers from MIT and Brigham and Women’s Hospital has now come up with a new approach to splitting ventilators, which they believe could address many of these safety concerns. They have demonstrated its effectiveness in laboratory tests, but they still caution it should be used only as a last resort during an emergency, when a patient’s life is at stake.

“We hope this approach, which requires off-the-shelf components, can ultimately help patients in extreme need of ventilator support,” says Giovanni Traverso, an MIT assistant professor of mechanical engineering and a gastroenterologist at Brigham and Women’s Hospital. “We recognize that ventilator sharing is not the standard of care, and interventions like this one would only be recommended as a last recourse.”

The researchers are now working to engage with third parties for the purpose of seeking emergency use authorization from the U.S. Food and Drug Administration, which would grant temporary approval for using this approach on patients during the Covid-19 pandemic. Traverso is the senior author of a paper describing the new system today in Science Translational Medicine, and Shriya Srinivasan, a postdoc at MIT and BWH, is the lead author of the study.

Ventilators are machines that help people breathe by delivering oxygen through a tube placed in the mouth or the nose. The Covid-19 outbreak has raised the possibility that the number of ventilators in the United States could be insufficient for the number of patients who will need them now or in potential future waves of the disease. Additionally, other nations around the world have struggled to obtain enough ventilators to handle the Covid-19 outbreak.

In late March, at least one hospital in New York City began sharing ventilators between patients by attaching a T-shaped connector that creates two branches, one that leads to each patient’s breathing tube. When doctors do this, they have to match the patients very closely by size, age, and condition, because each patient receives the same volume of air (half of total produced by the ventilator).

This is considered risky, in part because there is no way to adjust the flow so that patients receive different amounts of air based on changes in their condition. For example, when one patient improves, his or her lungs become “stretchier” and can absorb more air, which could take air away from the other patient. Or, if one patient experiences a collapsed lung, a strong burst of air could be diverted to the other patient, causing damage to the lungs.

To overcome these challenges, the MIT team incorporated flow valves, one for each patient’s branch, that allow them to control the amount of air that each receives.

“These flow valves allow you to personalize the flow to each patient based on their needs,” Srinivasan says. “They also ensure that if one patient either improves or deteriorates, quickly or slowly, there’s a way to adapt for that.”

The setup also includes pressure release valves that can prevent too much air from going into one patient’s lungs, as well as safety measures including alarms that go off when a patient’s air intake changes.

To create their setup, the researchers used parts that are normally available in a hospital. The parts could also be obtained at hardware stores and sterilized, the researchers say. A typical ventilator produces enough air pressure to supply six to eight patients at a time, but the research team does not recommend using one ventilator for more than two people, as the setup becomes more complicated.

The researchers first tested their setup using a ventilator to split airflow between a pig and an artificial lung — a machine that simulates the function of the lungs. By changing the properties of the artificial lung, they could model many of the changing conditions that might occur in patients; they also showed that the ventilator settings could be adjusted to compensate for them. They later showed that they could ventilate two animals on one ventilator and maintain the necessary airflow to both.

This system should make it easier for health care workers to change the settings as patients’ conditions improve or deteriorate, the researchers say. The researchers also showed that if one patient experiences lung collapse, a pressure valve would automatically release the extra pressure that might flow toward the other patient.

The researchers are now working with pandemic response teams at Brigham and Women’s and Massachusetts General Hospital to deploy this approach if it becomes necessary. They have also created a website with tutorials on how to set up the system and obtain the right parts.

Although they believe that this approach overcomes many of the challenges that usually make sharing ventilators too risky, the researchers caution that it still remains a last resort.

“In terms of the safety and personalization concerns that have been brought up, this system is definitely an improvement,” Srinivasan says. “However, we don’t recommend it unless it’s a dire need.”

The research was funded by the Massachusetts Consortium on Pathogen Readiness (MassCPR), the Massachusetts Life Sciences Center, in-kind services from Philips, and discretionary funds from the MIT’s Department of Mechanical Engineering and Brigham and Women’s Hospital.

Researchers from MIT and Brigham and Women’s Hospital have created a system that allows two patients to share one ventilator. Postdoc Shriya Srinivasan explains the system has "individual channels for each patient, but has controls on them such that you can deliver the appropriate volumes and pressures that each patient needs.”