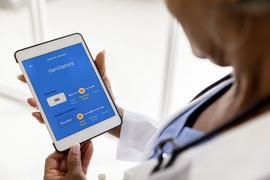 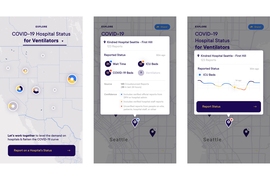 ↓ Download Image
Caption: EMTs can use the app as a map, zooming in by state, county, or city to quickly gauge hospital capacity, and decide which nearby hospitals have available beds where they can send a patient requiring hospitalization.
Credits: Image: Lorea Sinclaire 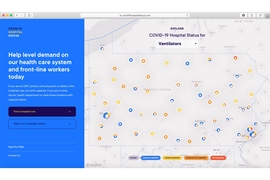 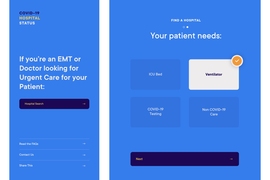 ↓ Download Image
Caption: This mock-up shows how EMTs, doctors and patients can use the app to select and identify which hospitals have availability.
Credits: Image: Lorea Sinclaire

Caption:
EMTs can use the app as a map, zooming in by state, county, or city to quickly gauge hospital capacity, and decide which nearby hospitals have available beds where they can send a patient requiring hospitalization.
Credits:
Image: Lorea Sinclaire

Caption:
This mock-up shows how EMTs, doctors and patients can use the app to select and identify which hospitals have availability.
Credits:
Image: Lorea Sinclaire

As cases of Covid-19 continue to climb in parts of the United States, the number of people seeking treatment is threatening to overwhelm many hospitals, forcing some facilities to ration their care and reserve ventilators, hospital beds, and other limited medical resources for the sickest patients.

Having a handle on local hospitals’ capacity and resource availability could help balance the load of Covid-19 patients requiring hospitalization across a region, for instance allowing an EMT to send a patient to a facility where they are more likely to be treated quickly. But many states lack real-time data on their current capacity to treat Covid-19 patients.

A group of researchers in MIT’s Computer Science and Intelligence Laboratory (CSAIL), working with the MIT spinoff Mobi Systems, are aiming to help level demand across the entire health care network by providing real-time updates of hospital resources, which they hope will help patients, EMTs, and physicians quickly decide which facility is best equipped to handle a new patient at any given time.

The team has developed a web app which is now publicly accessible at: https://Covid19hospitalstatus.com. The interface allows users such as patients, nurses, and doctors to report a hospital’s current status in a number of metrics, from the average wait time (something that a patient may get a sense for as they spend time in a waiting room), to the number of ventilators and ICU beds, which doctors and nurses may be able to approximate.

EMTS can use the app as a map, zooming in by state, county, or city to quickly gauge hospital capacity, and decide which nearby hospitals have available beds where they can send a patient requiring hospitalization. The app can also generate a list of hospitals, prioritized by availability, time of travel, and most recently updated data.

“We want to flatten the Covid curve by physical distancing over the course of months,” says MIT graduate Anna Jaffe ’07, CEO of Mobi Systems. “But there’s another curve to flatten, which is this real-time challenge of getting the right patient to the right hospital, in the right moment, to level the load on hospitals and health care workers.”

As the pandemic began to unfold around the world, Jaffe was intrigued by the results of a short hackathon that one Mobi member, Julius Pätzold, recently attended in Germany. The weekend challenge, sponsored by the German government, included a problem to match supply and demand, for instance in a hospital facing a surge in patient visits.

His team mapped the German hospital infrastructure, including the status of individual hospitals’ capacity, then simulated dispatching patients to hospitals according to a hospital’s capacity, its relative location to a patient, and a patient’s medical needs. The real-time maps developed over this short time suggested such tools would have a positive impact on a patient’s quality of care, specifically in decreasing death rates.

“That intersected with my feeling that I think everyone wants to do something around Covid-19 in response to the current crisis, and not just be cooped up in our respective homes,” says Jaffe, whose company, Mobi Systems, develops tools for large-scale network optimization problems surrounding mobility and hospitality.

Jaffe reached out to Williams to help develop a web-based reporting tool for hospitals, to similarly help patients and medical professionals make critical, real-time decisions of where best to send a patient, based on resource availability.

“Our question was, how can the resources statewide or nationwide be used most effectively, in order to keep the most people healthy,” Williams says. “And for the individual, which hospital will meet their needs, and how do they get there. That’s the exercise we’re tackling here.”

The team’s app is heavily dependent on crowdsourced data, and the willingness of patients and medical professionals to report on various metrics, from a hospital’s current wait time to the approximate number of ICU beds and ventilators available.

“The reporting options right now are very specific,” Jaffe says. “But what we really want to know is, can your hospital accept a patient right now?”

A user can enter their role — patient, nurse, or physician — then report on, for instance, a hospital’s average wait time. With a sliding scale, they can rate their confidence in their report before submitting it.

But what if those users are reporting false or inaccurate data, whether intentionally or not?

Williams says in order to guard against such uncertainty, the team takes a probabilistic approach. For instance, the app assumes that one user’s reporting of a hospital’s status is one of low confidence, which is initially not weighed heavily in the overall estimation for that metric. They can then incorporate this one data point into all the other reports they’ve received for that metric. If most of those reports have also been rated with low confidence, but report the same result, that estimate, such as of wait time, is automatically weighed more heavily, and therefore rated at a higher confidence overall.

Additionally, he says if the app receives reports from more trusted sources — for instance, if hospitals make in-house, aggregated data available to the app — those sources would “swamp out” or take higher priority over low-confidence reports of the same metric.

The team is testing the app with just such a trustworthy dataset, from the state of Pennsylvania, which for the last several years has had a system in place for hospitals to report resource availability, that is updated at least twice a day. The team has used data from the last week to track Covid-19 visits across the state’s hospital system.

“In this data, you can see that not all hospitals are overrun — there are clear differences in availability,” says MIT graduate Peng Yu ’SM 13, ’PhD 17, chief technology officer at Mobi, highlighting the potential for distributing patients across a region’s hospitals, to balance resources across a hospital network.

However, most states lack such aggregated, updated information. In most other states, for instance, EMTs either have a handful of default facilities where they typically send patients, or they have to call around to surrounding hospitals to check availability.

“It’s really about word of mouth — who do you know, and who do you call up,” says Williams, whose nephew is an EMT who has worked in regions with varying decision-making practices. “We’re trying to aggregate that information, to make these recommendations much faster.

The team is now reaching out to thousands of medical professionals to test-drive the reporting tool, in hopes of boosting the crowdsourcing component for the app, which is now available on any internet-enabled device. To address the pandemic, the team believes that data need to be made available at a faster rate than the virus’ spread. Their hope is that states will follow in Pennsylvania’s footsteps and, for instance, mandate that hospitals report resource data, and provide reporting tools such as the new app to doctors and EMTs.

“This project is very much for the people, by the people, and will be kept open and free,” Williams says.

“Unfortunately, it doesn’t feel like this is a flash pandemic,” Jaffe says. “Even in a recovery period, hospitals will have to resume normal care, concurrently with treating Covid-19 over time. Our app may help load balance in that way as well, so hospitals can more effectively predict how many floors they need to quarantine for Covid-19, so that the rest of the hospital can go back to things like having families around a mother giving birth. We aim to really understand how to bring things back to a more normal operational status, while still handling the crisis.

3 Questions: Jeffrey Harris on the evolution of health care during the Covid-19 pandemic