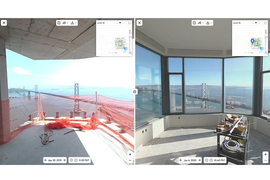 ↓ Download Image
Caption: The startup OpenSpace is helping customers in the construction industry understand their job sites using 360-degree cameras and machine vision to map out spaces. This image shows an example of OpenSpace’s versioning feature.
Credits: Image courtesy of the OpenSpace

Caption:
The startup OpenSpace is helping customers in the construction industry understand their job sites using 360-degree cameras and machine vision to map out spaces. This image shows an example of OpenSpace’s versioning feature.
Credits:
Image courtesy of the OpenSpace

People who work behind a computer screen all day take it for granted that everyone’s work will be tracked and accessible when they collaborate with others. But if your job takes place out in the real world, managing projects can require a lot more effort.

In construction, for example, general contractors and real estate developers often need someone to be physically present on a job site to verify work is done correctly and on time. They might also rely on a photographer or smartphone images to document a project’s progress. Those imperfect solutions can lead to accountability issues, unnecessary change orders, and project delays.

Now the startup OpenSpace is bringing some of the benefits of digital work to the real world with a solution that uses 360-degree cameras and computer vision to create comprehensive, time-stamped digital replicas of construction sites.

All customers need to do is walk their job site with a small 360-degree camera on their hard hat. The OpenSpace Vision Engine maps the photos to work plans automatically, creating a Google Streetview-like experience for people to remotely tour work sites at different times as if they were physically present.

“The core product we have today is a simple idea: It allows our customers to have a complete visual record of any space, indoor or outdoor, so they can see what’s there from anywhere at any point in time,” says OpenSpace cofounder and CEO Jeevan Kalanithi SM ’07. “They can teleport into the site to inspect the actual reality, but they can also see what was there yesterday or a week ago or five years ago. It brings this ground truth record to the site.”

Shining a light on construction sites

The founders of OpenSpace originally met during their time at MIT. At the Media Lab, Kalanithi and David Merrill SM ’06, PhD ’09 built a gaming system based on small cubes that used LCD touch screens and motion sensors to encourage kids to develop critical thinking skills. They spun the idea into a company, Sifteo, which created multiple generations of its toys.

In 2014, Sifteo was bought by 3D Robotics, then a drone company that would go on to focus on drone inspection software for construction, engineering, and mining firms. Kalanithi stayed with 3D Robotics for over two years, eventually serving as president of the company.

In the summer of 2016, Kalanithi left 3D Robotics with the intention of spending more time with friends and family. He reconnected with two friends from MIT, Philip DeCamp ’05, SM ’08, PhD ’13 and Michael Fleischman PhD ’08, who had researched new machine vision and AI techniques in their PhD research. Fleischman had started a social media analytics company he sold to Twitter.

At the time, DeCamp and Fleischman were considering ways to use machine vision advances with 360-degree cameras. Kalanithi, who had helped guide 3D Robotics toward the construction industry, thought he had the perfect application.

Early versions of the OpenSpace solution required someone to set up a tripod in every space of a construction project. A breakthrough came when one early user, a straight-talking project manager, gave the founders some useful feedback.

“I was showing him the output of our product at the time, which looks similar to now, and he says, ‘This is great. How long did it take you?’ When I told him he said, ‘Well that’s cool Jeevan, but there’s no way we’re going to use that,’” Kalanithi recalls. “I thought maybe this idea isn’t so good after all. But then he gave us the idea. He said, ‘What would be great is if I could just wear that little camera and walk around. I walk around the job site all the time.’”

The founders took the advice and repurposed their solution to work with off-the-shelf 360-degree cameras and slightly modified hard hats. The cameras take pictures every half second and use artificial intelligence techniques to identify the camera’s precise location, even indoors. Once a few tours of the job site have been uploaded to OpenSpace’s platform, it can map pictures onto site plans within 15 minutes.

Kalanithi still remembers the excitement the founders felt the first time they saved a customer money, helping to settle a dispute between a general contractor and a drywall specialist. Since then they’ve gotten a lot of those calls, in some cases saving companies millions of dollars. Kalanithi says saving builders costs helps the construction industry meet growing needs related to aging infrastructure and housing shortages.

OpenSpace’s analytics solutions, which the company calls its ClearSight suite of products, have not been rolled out to every customer yet. But Kalanithi believes they will bring even more value to people managing work sites.

“If you have someone walking around the project all the time, we can start classifying and computing what they’re seeing,” Kalanithi says. “So, we can see how much framing and drywall is being installed, how quickly, how much material was used. That’s the basis for how people get paid in this industry: How much work did you do?”

Kalanithi believes Clearsight is the beginning of a new phase for OpenSpace, where the company can use AI and computer vision to give customers a new perspective on what’s going on at their job site.

“The product experience today, where you look around to see the site, will be something people sometimes do on OpenSpace, but they may be spending more time looking at productivity charts and little OpenSpace verified payment buttons, and maybe sometimes they’ll drill down to look at the actual images,” Kalanithi says.

The Covid-19 pandemic accelerated some companies’ adoption of digital solutions to help cut down on travel and physical contact. But even in states that have resumed construction, Kalanithi says customers are continuing to use OpenSpace, a key indicator of the value it brings.

Indeed, the vast majority of the information captured by OpenSpace was never available before, and it brings with it the potential for major improvements in the construction industry and beyond.

“If the last decade was defined by the cloud and mobile technology being the real enabling technologies, I think this next decade will be innovations that affect people in the real physical world,” Kalanithi says. “Because cameras and computer vision are getting better, so for a lot of people who have been ignored or left behind by technology based on the work they do, we’ll have the opportunity to make some amends and build some stuff that will make those folks' lives easier.”