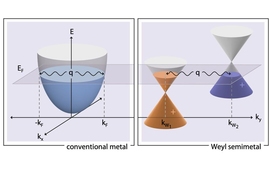 ↓ Download Image
Caption: Diagram depicts the different conditions that give rise to a Kohn anomaly in ordinary metals (at left), versus a material called a Weyl semimetal (at right). The vertical axis shows energy, while the horizontal axis is momentum space. In the conventional metal, a Kohn anomaly can happen when a phonon (q) links two parts of a property called the Fermi surface, which is shown in blue. In the Weyl semimetal, the Kohn anomaly arises when the phonon links two separate Weyl points (kw1-kw2).
Credits: Image courtesy of the researchers

Caption:
Diagram depicts the different conditions that give rise to a Kohn anomaly in ordinary metals (at left), versus a material called a Weyl semimetal (at right). The vertical axis shows energy, while the horizontal axis is momentum space. In the conventional metal, a Kohn anomaly can happen when a phonon (q) links two parts of a property called the Fermi surface, which is shown in blue. In the Weyl semimetal, the Kohn anomaly arises when the phonon links two separate Weyl points (kw1-kw2).
Credits:
Image courtesy of the researchers

An exotic physical phenomenon known as a Kohn anomaly has been found for the first time in an unexpected type of material by researchers at MIT and elsewhere. They say the finding could provide new insights into certain fundamental processes that help determine why metals and other materials display the complex electronic properties that underlie much of today’s technology.

The way electrons interact with phonons — which are essentially vibrations passing through a crystalline material — determines the physical processes that take place inside many electronic devices. These interactions affect the way metals resist electric current, the temperature at which some materials suddenly become superconductors, and the very low temperature requirements for quantum computers, among many other processes.

But electron-phonon interactions have been difficult to study in detail because they are generally very weak. The new study has found a new, stronger kind of unusual electron-phonon interaction: The researchers induced a Kohn anomaly, which was previously thought to exist only in metals, in an exotic material called a topological Weyl semimetal. The finding could help shed light on important aspects of the complex interplay between electrons and phonons, they say.

The new finding, based on both theoretical predictions and experimental observation, is described this week in the journal Physical Review Letters, in a paper by MIT graduate students Thanh Nguyen and Nina Andrejevic, postdoc Ricardo Pablo-Pedro, Research Scientist Fei Han, Professor Mingda Li, and 14 others at MIT and several other universities and national laboratories.

Kohn anomalies, first discovered in the 1950s by physicist Walter Kohn, reflect a sudden change, sometimes described as a kind of kink or wiggle, in the graph describing a physical parameter called the electron response function. This discontinuity in an otherwise smooth curve reflects a sudden change of the capability of electrons for shielding phonons. This can give rise to instabilities in the propagation of electrons through the material, and can lead to many new electronic properties.

These anomalies have been observed before in certain metals and in other highly electrically conductive materials such as graphene, but had never been seen or predicted before in a “topological material,” whose electrical behaviors are robust against perturbation. In this case, a kind of topological material called a Weyl semimetal, specifically tantalum phosphide, was found to be capable of exhibiting this unusual anomaly. Unlike in conventional metals, where a property called the Fermi surface drives the formation of the Kohn anomaly, in this material, the Weyl points serve as the driving force.

Because electron-phonon couplings are taking place practically everywhere all the time, they can be a major source of disturbance in delicate physical systems such as those used to represent data in quantum computers. Measuring the strength of these interactions, which is key to knowing how to protect such quantum-based technologies, has been very difficult, but this new finding, Li says, provides a way of making such measurements. “The Kohn anomaly can be used to quantify how strong the electron-phonon coupling can be,” he says.

To measure the interactions, the team made use of advanced neutron and X-ray scattering probes at three national laboratories — Argonne National Laboratory, Oak Ridge National Laboratory, and the National Institute of Standards and Technology — to probe the behavior of the tantalum phosphide material. “We predicted that there is a Kohn anomaly in the material just based on pure theory,” Li explains, Using their calculations, “we could guide the experiments to the point where we want to search for the phenomenon, and we see a very good agreement between theory and the experiments.”

Martin Greven, a professor of physics at the University of Minnesota who was not involved in this research, says this work “has impressive breadth and depth, spanning both sophisticated theory and scattering experiments. It breaks new ground in condensed matter physics, in that it establishes a new kind of Kohn anomaly.”

A better understanding of the electron-phonon couplings could help lead the way to developing such materials as better high-temperature superconductors or fault-tolerant quantum computers, the researchers say. This new tool could be used to probe material properties in search of those that remain relatively unaffected at higher temperatures.

Brent Fultz, a professor of materials science and applied physics at Caltech, who was also not involved in this work, adds that “perhaps these effects will help the development of materials with new thermal or electronic properties, but since they are so new, we need time to think about what they can do.”

Nguyen, the paper’s lead author, says he thinks this work helps to demonstrate the sometimes overlooked importance of phonons in the behavior of topological materials. Materials such as these, whose surface electrical properties are different from those of the bulk material, are a hot area of current research. “I think this could lead us to further understand processes that would underlie some of these materials that hold a lot of promise for the future,” says Andrejevic, who along with Han was a co-lead author on the paper.

“Although electron-phonon interaction is long known to exist, the experimental prediction and observation of these interactions is exceedingly rare,” says professor of physics and astronomy Pengcheng Dai at Rice University, who also was not involved in this work. These results, he says, “provide an excellent demonstration of the power of combined theory and experiments as a way to extend our understanding of these exotic materials.”

Deriving a theory of defects

Mapping the effects of crystal defects