Fireflies helps companies get more out of meetings 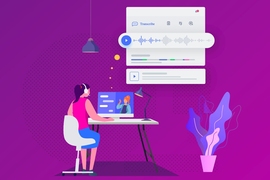 ↓ Download Image
Caption: The startup Fireflies.ai is helping people get the most out of their meetings with a note-taking, information-organizing virtual assistant named Fred.
Credits: Image courtesy of the researchers 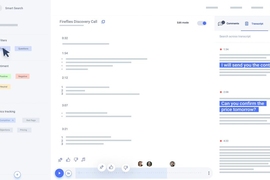 ↓ Download Image
Caption: Fred joins Zoom, Google Meet, Skype, or Microsoft calls as a participant, silently transcribing and generating notes from the meeting. After the meeting, the AI assistant sends a full transcript to whomever the organizer chooses, allowing users to click on sections of the transcript to hear that part of the meeting audio. Users can also search the transcript and go through an hourlong meeting in five minutes, according to the company.
Credits: Image courtesy of the researchers

Caption:
The startup Fireflies.ai is helping people get the most out of their meetings with a note-taking, information-organizing virtual assistant named Fred.
Credits:
Image courtesy of the researchers

Caption:
The company was founded by Sam Udotong ’16 (left), and Krish Ramineni (right) in 2016.
Credits:
Image courtesy of the researchers

Caption:
Fred joins Zoom, Google Meet, Skype, or Microsoft calls as a participant, silently transcribing and generating notes from the meeting. After the meeting, the AI assistant sends a full transcript to whomever the organizer chooses, allowing users to click on sections of the transcript to hear that part of the meeting audio. Users can also search the transcript and go through an hourlong meeting in five minutes, according to the company.
Credits:
Image courtesy of the researchers

Many decisions are made and details sorted out in a productive business meeting. But in order for that meeting to translate into results, participants have to remember all those details, understand their assignments, and follow through on commitments.

The startup Fireflies.ai is helping people get the most out of their meetings with a note-taking, information-organizing virtual assistant named Fred. Fred transcribes every word of meetings and then uses artificial intelligence to help people sort and share that information later on.

“There’s a tremendous amount of data generated in meetings that can help your team stay on the same page,” says Sam Udotong ’16, who founded the company with Krish Ramineni in 2016. “We let people capture that data, search through it, and then share it to the places that matter most.”

The tool integrates with popular meeting and scheduling software like Zoom and Google Calendar so users can quickly add Fred to calls. It also works with collaboration platforms like Slack and customer management software like Salesforce to help ensure plans turn into coordinated action.

Fireflies is used by people working in roles including sales, recruiting, and product management. They can use the service to automate project management tasks, screen candidates, and manage internal team communications.

In the last few months, driven in part by the Covid-19 pandemic, Fred has sat through millions of minutes of meetings involving more than half a million people. And the founders believe Fred can do more than simply help people adjust to remote work; it can also help them collaborate more effectively than ever before.

“[Fred] is giving you perfect memory,” says Udotong, who serves as Firelies’ chief technology officer. “The dream is for everyone to have perfect recall and make all their decisions based on the right information. So being able to search back to exact points in conversation and remember that is powerful. People have told us it makes them look smarter in front of clients.”

Udotong was introduced to the power of machine learning in his first year at MIT while working on a project in which students built a drone that could lead people on campus tours. Later, during his first MIT hackathon, he sought to use machine learning in a cryptography solution. That’s when he met Ramineni, who was a student at the University of Pennsylvania. That's also when Fireflies was born — although the founders would go on to change everything about the company besides its name as they sought to use artificial intelligence to improve efficiency in a range of fields.

“We ended up building six iterations of Fireflies before this current meeting assistant,” Udotong remembers. “And every time we would build a different iteration, we would tell our friends, ‘Download it, use it, and get back to us next week, we’ll grab coffee.’ We were making all these agreements and promises, and it became really challenging to keep track of all the conversations we were having to get our products out there. We thought, ‘What if we just had an AI that could keep track of conversations for us?’”

Following Udotong’s graduation with a degree in aeronautics and astronautics in 2016, the founders decided to use a $25,000 stipend they received from Rough Draft Ventures, along with $5,000 from the MIT Sandbox Innovation Fund, to work on Fireflies through the summer.

The plan was to work on Fireflies for another short burst: Ramineni was already making plans to attend Cambridge University for his master’s degree in the fall, and Udotong was weighing acceptance letters from graduate schools as well as job offers. By July, however, the founders had changed their plans.

“I think deciding [on a career path] is really hard these days, even if you identify your passion,” Udotong says. “The easy path for someone in tech is to follow the money and go work for Google or Facebook. We decided to go a different route and take the risk.”

They moved to Ramineni’s hometown of San Francisco to officially launch the company. Udotong remembers getting to San Francisco with $100 dollars in his bank account.

The founders had fully committed themselves to Fireflies, but it didn’t make starting the company any easier. They decided not to raise venture capital in the company’s early years, and Ramineni admits to questioning whether going all in on Fireflies was the right decision as recently at 2018.

The founders also weren’t sure a radically new software category would be embraced so readily by businesses. They continued to invest in the voice AI space, as they believed that the need for their technology was growing and the timing was right.

“We realized that there’s a ton of data generated every day through speech, either in meetings like Zoom or in person,” Ramineni says. “Today, two hours after your meeting, unless you’re taking good notes or recording, you’re not going to be able to recall everything. You might not even remember what action items you agreed to a few hours ago. It’s such a common problem that people don’t even know it’s an issue. You have meetings and you expect things to slip through the cracks.”

Today the Fireflies solution shows little trace of the arduous journey the founders took to get to this point. In fact, building simplicity into the tool has been a major focus for the founders.

Fred can join calendar events automatically or be added to meetings using the fred@fireflies.ai address. Fred joins Zoom, Google Meet, Skype, or Microsoft calls as a participant, silently transcribing and generating notes from the meeting. After the meeting, the AI assistant sends a full transcript to whomever the organizer chooses, allowing users to click on sections of the transcript to hear that part of the meeting audio. Users can also search the transcript and go through an hourlong meeting in five minutes, according to the company. The transcript can also surface action items, tasks, metrics, pricing, and other topics of interest.

After each meeting, Fireflies can automatically sync all this meeting data into apps from companies like Slack, Salesforce, and Hubspot.

“Fireflies is like a personal assistant that helps connect your systems of communication with your systems of record,” Udotong says. “If you’re having these meetings over Zoom and Google Meet every day, and you’re interacting with Slack or Trello, Fireflies is that middle router that can bring synchronicity to your work life.”

In the midst of the Covid-19 pandemic, millions of companies have been forced to operate remotely, and the founders think the impact of that response will be felt for far longer than the virus.

“I think the world’s now realizing that people can be fully distributed,” says Ramineni, who notes Fireflies’ team has been remote since he and Udotong began working together in college hackathons from different campuses in 2014.

And as the company has grown, customers have begun using Fred for use cases the founders hadn’t even considered, like sending Fred to meetings that they can’t attend and reviewing the notes later on. Customers, the founders believe, are realizing that being able to quickly search, sort, and otherwise collaborate across audio data unlocks a world of new possibilities.

“It’s kind of like what Google did with search,” Udotong says. “There was five to 10 years of web data building up, and there was no way for people to find what they were looking for. The same thing is true today of audio and meeting data. It’s out there, but there’s no way to actually find what you’re looking for because it’s never even stored in the first place.”