How to get conductive gels to stick when wet 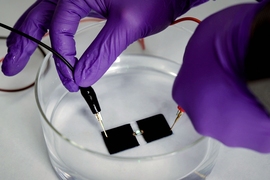 ↓ Download Image
Caption: The conductive polymer material was tested for its electrical conductivity while immersed in water to demonstrate its durability and ability to maintain adhesion.
Credits: Images: Melanie Gonick, MIT 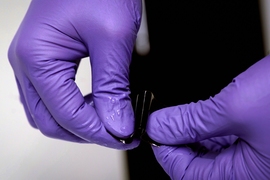 ↓ Download Image
Caption: The polymer material is highly flexible, allowing it to be used for biological sensors that can flex with the body.
Credits: Images: Melanie Gonick, MIT

Caption:
The conductive polymer material was tested for its electrical conductivity while immersed in water to demonstrate its durability and ability to maintain adhesion.
Credits:
Images: Melanie Gonick, MIT

Caption:
The polymer material is highly flexible, allowing it to be used for biological sensors that can flex with the body.
Credits:
Images: Melanie Gonick, MIT

Polymers that are good conductors of electricity could be useful in biomedical devices, to help with sensing or electrostimulation, for example. But there has been a sticking point preventing their widespread use: their inability to adhere to a surface such as a sensor or microchip, and stay put despite moisture from the body.

Now, researchers at MIT have come up with a way of getting conductive polymer gels to adhere to wet surfaces. 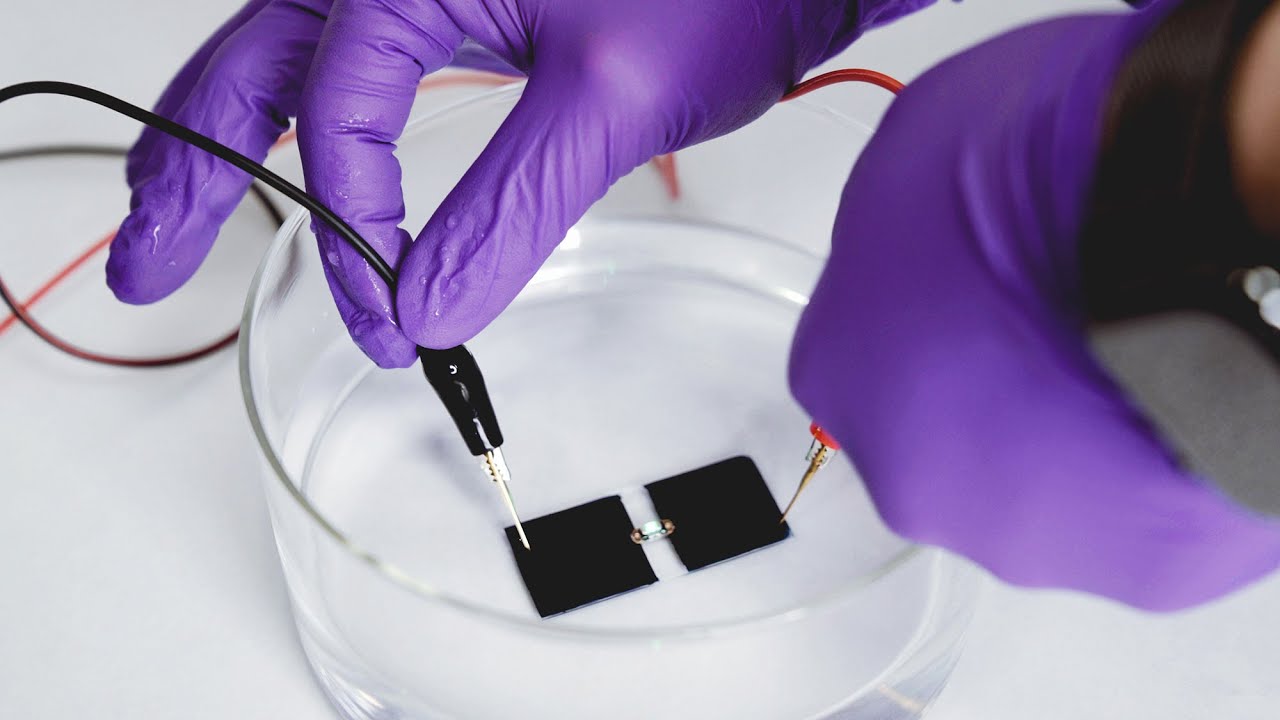 Most electrodes used for biomedical devices are made of platinum or platinum-iridium alloys, Zhao explains. These are very good electrical conductors that are durable inside the moist environment of the body, and chemically stable so they do not interact with the surrounding tissues. But their stiffness is a major drawback. Because they can’t flex and stretch as the body moves, they can damage delicate tissues.

Conductive polymers such as PEDOT:PSS, by contrast, can very closely match the softness and flexibility of the vulnerable tissues in the body. The tricky part has been getting them to stay attached to the biomedical devices they are connected to. Researchers have been struggling for years to make these polymers durable in the moist and always-moving environments of the body.

“There have been thousands of papers talking about the advantages of these materials,” Yuk says, but the companies that make biomedical devices “just don’t use them,” because they need materials that are exceedingly reliable and stable. A failure of the material could require an invasive surgical procedure to replace it, which carries additional risk for the patient.

Stiff metal electrodes “sometimes harm the tissues, but they work well in terms of reliability and stability over a period of years,” which has not been the case with polymer substitutes until now, he says.

Most efforts to address this problem have involved making significant modifications to the polymer materials to improve their durability and their ability to adhere, but Yuk says that creates problems of its own: Companies have already invested heavily in equipment to manufacture these polymers, and major changes to the formulation would require significant investment in new production equipment. These changes would be for a market that is relatively small in economic terms, though large in potential impact. Other approaches that have been tried are limited to specific materials. Instead, the MIT team focused on making the fewest changes possible, to ensure compatibility with existing production methods, and making the method applicable to a wide variety of materials.

Their method involves an extremely thin adhesive layer between the conductive polymer hydrogel and the substrate material. Though only a few nanometers thick (billionths of a meter), this layer turns out to be effective at making the gels adhere to any of a wide variety of commonly used substrate materials, including glass, polyimide, indium tin oxide, and gold. The adhesive layer penetrates into the polymer itself, producing a tough, durable protective structure that keeps the material in place even when exposed for long periods to a wet environment.

The adhesive layer can be applied to the devices by a variety of standard manufacturing processes, including spin coating, spray coating, and dip coating, making it easy to integrate with existing fabrication platforms. The coating the researchers used in their tests is made of polyurethane, a hydrophilic (water-attracting) material that is readily available and inexpensive, though other similar polymers could also be used. Such materials “become very strong when they form interpenetrating networks,” as they do when coated on the conducting polymer, Yuk explains. This enhanced strength should address the durability problems associated with the uncoated polymer, he says.

The result is a mechanically strong and conductive gel that bonds tightly with the surface it’s attached to. “It’s a very simple process,” Yuk says.

The bonding proves to be highly resistant to bending, twisting, and even folding of the substrate material. The adhesive polymer has been tested in the lab under accelerated aging conditions using ultrasound, but Yuk says that for the biomedical device industry to accept such a new material will require longer, more rigorous testing to confirm the stability of these coated fibers under realistic conditions over long periods of time.

“We’d be very happy to license and put this technology out there to test it further in realistic situations,” he says. The team has begun talking to manufacturers to see “how we can best help them to test this knowledge,” he says.

“I think this is a great piece of work,” says Zhenan Bao, a professor of chemical engineering at Stanford University, who was not associated with this research. “Wet adhesives are already a big challenge. Conductive adhesives that work well in wet conditions are even more rare. They are very much needed for nerve interfaces and recording electrical signals from the heart or brain.”

Bao says this work “is a major advancement in the bioelectronics field.”

The research was supported by the National Science Foundation, the JSR corporation, and Samsung.