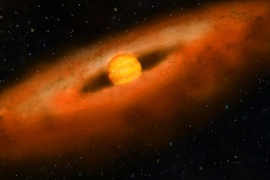 ↓ Download Image
Caption: Researchers at MIT, the University of Oklahoma, and elsewhere, with the help of citizen scientists, have identified a brown dwarf with a disk that is the youngest of its kind within about 100 parsecs of Earth. The brown dwarf, named W1200-7845 and depicted in this image, appears to have the kind of disk that could form planets.
Credits: Image Credit: NASA/William Pendrill

Caption:
Researchers at MIT, the University of Oklahoma, and elsewhere, with the help of citizen scientists, have identified a brown dwarf with a disk that is the youngest of its kind within about 100 parsecs of Earth. The brown dwarf, named W1200-7845 and depicted in this image, appears to have the kind of disk that could form planets.
Credits:
Image Credit: NASA/William Pendrill

Brown dwarfs are the middle child of astronomy, too big to be a planet yet not big enough to be a star. Like their stellar siblings, these objects form from the gravitational collapse of gas and dust. But rather than condensing into a star’s fiery hot nuclear core, brown dwarfs find a more zen-like equilibrium, somehow reaching a stable, milder state compared to fusion-powered stars.

Brown dwarfs are considered to be the missing link between the most massive gas giant planets and the smallest stars, and because they glow relatively dimly they have been difficult to spot in the night sky. Like stars, some brown dwarfs can retain the disk of swirling gas and dust left over from their initial formation. This material can collide and accumulate to form planets, though it’s unclear exactly what kind of planets brown dwarfs can generate.

Now researchers at MIT, the University of Oklahoma, and elsewhere, with the help of citizen scientists, have identified a brown dwarf with a disk that is the youngest of its kind within about 100 parsecs of Earth. The brown dwarf, named W1200-7845, appears to have the kind of disk that could potentially form planets. It is about 3.7 million years old and sits at a nearby 102 parsecs, or about 332 light years from Earth.

At this proximity, scientists may be able to zoom in on the young system with future high-powered telescopes, to examine the earliest conditions of a brown dwarf’s disk and perhaps learn more about the kind of planets brown dwarfs might support.

The new system was discovered through Disk Detective, a crowdsourced project funded by NASA and hosted by Zooniverse that provides images of objects in space for the public to classify, with the aim of picking out objects that are likely stars with disks that could potentially host planets.

The researchers are presenting their findings, as well as announcing a new version of the Disk Detective website, this week at the all-virtual meeting of the American Astronomical Society.

“Within our solar neighborhood”

Users of Diskdetective.org, which first launched in 2014, can look through “flipbooks” — images of the same object in space, taken by NASA’s Wide-field Infrared Survey Explorer, or WISE, which detects infrared emissions such as thermal radiation given off by the gas and dust debris in stellar disks. A user could classify an object based on certain criteria such as whether the object appears oval — a shape that more resembles a galaxy — or round —a sign that the object is more likely a disk-hosting star.

From there, a science team including Silverberg follows up on crowd-classified disks, using more sophisticated methods and telescopes to determine if indeed they are disks, and what characteristics the disks may have.

In the case of the newly discovered W1200-7845, citizen scientists first classified the object as a disk in 2016. The science team, including Silverberg and Maria Schutte, a graduate student at the University of Oklahoma, then looked more closely at the source with an infrared instrument on the Magellan 6.5-meter telescopes at Las Campanas Observatory in Chile.

With these new observations, they determined that the source was indeed a  disk around a brown dwarf that lived within a “moving group” — a cluster of stars that tend to move as one across the night sky. In astronomy, it’s far easier to determine the age of a group of objects rather than one alone. Because the brown dwarf was part of a moving group of about 30 stars, previous researchers were able to estimate an average age for the group, about 3.7 million years old, that was likely also the age of the brown dwarf.

The brown dwarf is also very close to the Earth, at about 102 parsecs away, making it the closest, young brown dwarf detected yet. For comparison, our nearest star, Alpha Centauri, is 1 parsec from Earth.

“When it’s this close, we consider it to be within the solar neighborhood,” Schutte says. “That proximity is really important, because brown dwarfs are lower in mass and inherently less bright than other objects like stars. So the closer these objects are to us, the more detail we’ll be able to see.”

The team plans to zoom further in on W1200-7845 with other telescopes, such as ALMA, the Atacama Large Millimeter Array in Chile, comprising 66 huge radio dishes that work together as one powerful telescope to observe the universe between the radio and infrared bands. At this range and precision, the researchers hope to see the brown dwarf’s disk itself, to measure its mass and radius.

“A disk’s mass just tells you how much stuff is in the disk, which would tell us if planet formation happens around these systems, and what sorts of planets you’d be able to produce,” Silverberg says. “You could also use that data to determine what kinds of gas are in the system which would tell you about the disk’s composition.”

In the meantime, the researchers are launching a new version of Disk Detective. In April 2019, the website went on hiatus, as its hosting platform, the popular citizen scientist portal Zooniverse, briefly retired its previous software platform in favor of an updated version. The updated platform has prompted Silverberg and his colleagues to revamp Disk Detective. The new version, launching this week, will include images from a full-sky survey, PanSTARRS, that observes most of the sky in high-resolution optical bands.

“We’re getting more current images with different telescopes with better spatial resolution this time around,” says Silverberg, who will be managing the new site at MIT.

Where the site’s previous version was aimed at finding any disks around stars and other objects, the new site is designed to pick out “Peter Pan” disks — disks of gas and dust that should be old enough to have formed planets, but for some reason haven’t quite yet.

“We call them Peter Pan disks because they seem to never grow up,” Silverberg says.

The team identified its first Peter Pan disk with Disk Detective in 2016. Since then, seven others have been found, each at least 20 million years old. With the new site, they hope to identify and study more of these disks, which could help to nail down conditions under which planets, and possibly life, may form.

“The disks we find will be excellent places to look for exoplanets,” Silverberg says.

“If planets take longer to form than we previously thought, the star they orbit will have fewer gigantic flares when the planets finally form. If the planet receives fewer flares than it would around a younger star, that could significantly impact our expectations for discovering life there.”

Researchers from MIT, the University of Oklahoma and elsewhere, along with citizen scientists, have discovered the closest young brown dwarf with a disc, reports Matt Berg for The Boston Globe. The discovery could help scientists learn more about how planets are formed, Berg explains.

Computing and the search for new planets