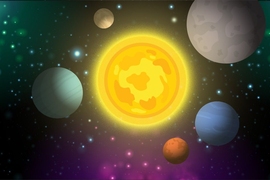 ↓ Download Image
Caption: Five new planets have been discovered outside our solar system, all orbiting a sun-like star located within the constellation Aquarius, nearly 620 light years from Earth. The alien worlds are considered super-Earths, sizing in at two to three times larger than our own blue planet.

Caption:
Five new planets have been discovered outside our solar system, all orbiting a sun-like star located within the constellation Aquarius, nearly 620 light years from Earth. The alien worlds are considered super-Earths, sizing in at two to three times larger than our own blue planet.
Credits:
Image: Christine Daniloff/MIT

Five new planets have been discovered outside our solar system, all orbiting a sun-like star located within the constellation Aquarius, nearly 620 light years from Earth. The alien worlds are considered super-Earths, sizing in at two to three times larger than our own blue planet.

All five exoplanets are likely scorchingly hot: Each planet comes incredibly close to its star, streaking around in just 13 days at most — a whirlwind of an orbit compared with Earth’s 365-day year.

The planets also appear to orbit their star in concentric circles, forming a tightly packed planetary system, unlike our own elliptical, far-flung solar system. In fact, the size of each planet’s orbit appears to be a ratio of the other orbits — a configuration astronomers call “resonance” — suggesting that all five planets originally formed together in a smooth, rotating disc, and over eons migrated closer in toward their star.

These new findings have been accepted to the Astrophysical Journal and were presented today by researchers from MIT and Caltech at the meeting of the American Astronomical Society.

The researchers say the credit for this planetary discovery goes mainly to the citizen scientists — about 10,000 from the around the world — who pored through publicly available data from K2, a follow-on to NASA’s Kepler Space Telescope mission, which since 2009 has observed the sky for signs of Earth-like planets orbiting sun-like stars.

In 2013, a malfunction in one of the spacecraft’s wheels forced Kepler to end its continuous observations. However, the following year, scientists reprogrammed the spacecraft’s thrusters and remaining wheels, enabling the telescope to point at certain parts of the sky for limited periods. Scientists dubbed this new phase of the mission “K2,” and they have been collecting data from the rejiggered telescope for the last three years.

K2’s data comprises light curves — graphs of light intensity from individual stars in the sky. A dip in starlight indicates a possible transit, or crossing, of an object such as a planet in front of its star.

The original Kepler mission was managed mostly by a dedicated team of trained scientists and astronomers who were tasked with analyzing incoming data, looking for transits, and classifying exoplanet candidates. In contrast, K2 has been driven mainly by decentralized, community-led efforts.

In 2017, Ian Crossfield, assistant professor of physics at MIT, who at the time was a Sagan Fellow at the University of California at Santa Cruz, worked with fellow astronomer Jesse Christiansen at Caltech to make the K2 data public and enlist as many volunteers as they could in the search for exoplanets.

The team used a popular citizen-scientist platform called Zooniverse to create its own project, dubbed Exoplanet Explorers. The project was inspired by a similar effort via Zooniverse called Planet Hunters, which has enabled users to sift through and classify both Kepler and K2 data.

For the Exoplanet Explorers project, Crossfield and Christiansen first ran a signal-detection algorithm to identify potential transit signals in the K2 data, then made those signals available on the Zooniverse platform. They designed a training program to first teach users what to look for in determining whether a signal is a planetary transit. Users could then sift through actual light curves from the K2 mission and click “yes” or “no,” depending on whether they thought the curve looked like a transit.

“We put all this data online and said to the public, ‘Help us find some planets,’” Crossfield says. “It’s exciting, because we’re getting the public excited about science, and it’s really leveraging the power of the human cloud.”

Several months into working with Zooniverse to get Exoplanet Explorers up and running, the researchers got a call from an Australian television program that was offering to feature the project on live television. The team scrambled to launch the effort, and over two days in April, as the program was broadcast live, Exoplanet Explorers drew 10,000 users who started sifting through the K2 data. Over 48 hours, the users made nearly 2 million classifications from the available light curves.

Crossfield and Christiansen, along with NASA astronomer Geert Barentsen, looked more closely at the classifications flagged by the public and determined that many of them were indeed objects of interest. In particular, the effort identified 44 Jupiter-sized, 72 Neptune-sized, and 44 Earth-sized planets, as well as 53 so-called super Earths, which are larger than Earth but smaller than Neptune.

One set of signals in particular drew the researchers’ interest. The signals appeared to resemble transits from five separate planets orbiting a single star, 190 parsecs, or 620 light years, away.

To follow up, they collected supporting data of the star taken previously from ground-based telescopes, which helped them to estimate the star’s size, mass, and temperature. They then took some additional measurements to ensure that it was indeed a single star, and not a cluster of stars.

By looking closely at the light curves associated with the star, the researchers determined that it was “extremely likely” that five planet-like objects were crossing in front of the star. From their estimates of the star’s parameters, they inferred the sizes of the five planets — between 2 and 2.9 times the size of the Earth — along with their orbits.

The new system, which they have dubbed K2-138, represents the first planetary system identified by citizen scientists using K2 data. Crossfield says as more data becomes available from other observational campaigns, he hopes scientists and citizens can work together to uncover new astrophysical phenomena.

“It turns out the world is big enough that there’s a lot of people who are interested in doing some amateur science,” Crossfield says. “And the human eye in many cases is very effective in separating the planetary wheat from the nonplanetary chaff.”

In particular, he envisions that the public will one day be able to analyze data taken by TESS, the Transiting Exoplanet Survey Satellite, which is set to launch later this year. It’s an MIT-led mission that will survey the entire sky for exoplanets orbiting the brightest stars.

“We’re looking forward to more discoveries in the near future,” Crossfield says. “We hope that the TESS mission, which MIT is leading, will also be able to engage the public in this way.”

Boston Globe reporter Marin Finucane writes that with the help of around 10,000 citizen scientists, a team of astronomers has discovered five planets outside our solar system. “It’s exciting because we’re getting the public excited about science, and it’s really leveraging the power of the human cloud,” says Prof. Ian Crossfield of the discovery.

Scientists make huge dataset of nearby stars available to public