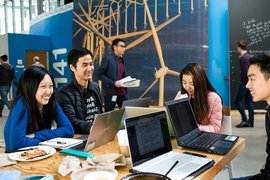 Caption:
The MIT Venture Mentoring Service has been facilitating team-based, conflict-free mentoring for students at MIT for nearly 20 years. Now the VMS model is helping students around the world.
Credits:
Image: Jake Belcher

In the fall of 2018, three first-year students at Trinity University in Texas had an idea for a nonprofit that would connect artists with the special-needs community and help people engage with artwork regardless of their age or disability.

Fortunately for the students, Trinity had just launched a new program on campus to support entrepreneurs. In November, the students began meeting regularly with a team of experienced mentors from their community. The mentors helped the students refine their idea and prioritize their next steps to form an organization. The following semester, the project, called heARTful, was named a finalist in a local venture competition and awarded $5,000.

Around the same time, a family in Mobile, Alabama, was looking to adapt its furniture store to the world of online retail. It became a member of the first cohort of companies to go through a team-based mentoring program hosted by the University of South Alabama. The program also included a dental practices management platform, an online retailer of cigars, and someone with a software solution to help coordinate fishing tournaments that has raised almost $1 million to date.

What do all of these ventures have in common? They’re all benefiting from a mentoring model for entrepreneurs that was developed at MIT nearly 20 years ago.

The core methodology of MIT’s Venture Mentoring Service (VMS) is straightforward: Entrepreneurs meet with a team of mentors in ongoing, confidential meetings. The mentors are volunteers and commit to avoiding any conflict of interest to ensure that they give objective and unbiased advice.

But while the basic tenets of the model are simple, they require a robust and disciplined support structure to be effective.

The VMS team, facing increasing interest from outside organizations, launched the VMS Outreach Training Program in 2006 to formally disseminate the model to other organizations.

The Outreach Training Program has since trained close to 100 organizations around the world, including economic development organizations, business accelerators and incubators, and around 40 colleges and universities.

In that time, the VMS model has been tested on campuses of all types, and its success has earned it a reputation in higher education as an outstanding methodology for supporting entrepreneurs.

A model for impact

In 2000, VMS was founded by the late MIT Professor David Staelin and the late Alexander Dingee ’52, both successful serial entrepreneurs. Not much has changed from their early idea: Members of the MIT community, including students, faculty, staff, and alumni, can be at any stage of venture creation when they begin using VMS. A team of three to five volunteer mentors, meeting in person with the entrepreneur, provides business advice through a carefully structured process.

“As we talk about our program with other organizaions, the concept of the trusted environment for the entrepreneur resonates; many people see that value,” says VMS Outreach Training Program Manager Ariane Martins, who also believes the team mentoring approach is a key to the program’s success. “Most people we talk to have never done mentoring in teams — certainly not in this structured way — but what we’ve seen is that it raises the quality and breadth of advice the entrepreneurs are given.”

The Outreach Training Program was formed in response to a growing demand, which was driven in part by several long-term trends in higher education, according to VMS Co-director Jerome Smith.

“These days, there are very few universities that aren’t talking about entrepreneurship or innovation” Smith says. “[VMS] is very complementary to other programs, because it is very practical. People gain a lot from the academic theory of entrepreneurship, but mentors in the VMS Model are working with entrepreneurs who are actually trying to start or grow a business.”

Schools have also collaborated with VMS to address increasing student interest in entrepreneurship. Luis Martinez is the director of the Center for Innovation and Entrepreneurship at Trinity University. Having worked with students in higher education for the better part of the last 20 years, he jokingly refers to college students today as “the Shark Tank generation.”

As the VMS methodology has spread, its applicability has been proven in a wide range of settings, from Mexico to Australia. Some campuses, like Trinity, a small, liberal arts school, predominantly serve undergraduates with VMS, while others primarily help professors, researchers, and even members of the local community.

The University of Texas (UT) has participated in the Outreach Training Program three times to implement the VMS model on a number of campuses including the UT MD Anderson Cancer Center and UT Austin.

“Texas is very, very different from Boston, but what we’ve found is that the core principals of team-based, conflict-free mentoring still hold true everywhere we’ve tested it,” says Matt Sorenson, innovation program manager for the University of Texas system. “Each ecosystem is so different, but we’ve found the methodology is equally effective.”

University officials also say the experiences of both the mentee and mentors in the VMS program can make a difference in the communities around their campuses.

“The impact [of the Trinity VMS program] has already been made in the community,” Martinez says. “It’s exciting, there’s a whole group of people now trained in the VMS methodology, both in the programming and the mentoring, so we’re trying to leverage the lessons being learned around the state and city.”

When the University of South Alabama decided to adopt the VMS methodology, it partnered with the city of Mobile, the local county, and the Chamber of Commerce to offer mentoring services not just to people affiliated with the school but also to local business owners.

“What’s great for smaller communities like ours is all this [meeting and learning in groups] means you’re building infrastructure,” says Michael Chambers, the associate vice president of research at the University of South Alabama. “All of a sudden you have an organized network of mentors, and they become aware of all these other local companies, and they become cheerleaders for those companies when they’re out in the community. … I don’t know where else we’d get that.”

David Staelin, longtime professor in EECS and RLE, dies at 73