A more intelligent system for the scooter wars 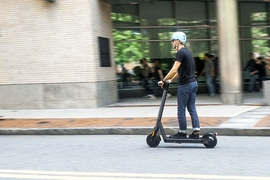 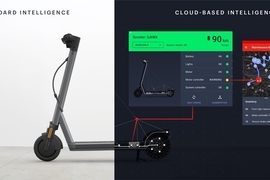 ↓ Download Image
Caption: Through Superpedestrian's web-based platform, scooter operators can get real time location and status information on any vehicle in their fleet.
Credits: Image: Superpedestrian

Caption:
Through Superpedestrian's web-based platform, scooter operators can get real time location and status information on any vehicle in their fleet.
Credits:
Image: Superpedestrian

Startups racing to deploy rentable electric scooters around the world seem to be following Facebook CEO Mark Zuckerberg’s famous motto for disruption: Move fast and break things. Unfortunately for those startups, the things that break most often are their scooters.

Vehicle maintenance, repair, and turnover have forced scooter operators to stomach huge financial losses in their two-wheeled quest to rule the road.

When the so-called “scooter wars” began a couple of years ago, MIT spinout Superpedestrian was enjoying strong sales of its first product, an adaptive, electric powertrain for bicycles called the Copenhagen Wheel.

But the natural boost riders get as they pedal with the Copenhagen Wheel is only half the story. Within the wheel’s distinctive red hub are sensors and microcomputers that allow it to autonomously diagnose problems and even take steps to protect itself against common hazards in a matter of nanoseconds. If the system identifies an issue it can’t correct, it takes itself offline and reports back detailed information to scooter operators for quick repair.

“When this [micromobility] industry was born, we said ‘We have the perfect solution for optimizing safety while also completely transforming the economics of running these things,” founder and CEO Assaf Biderman ’05 says. “So instead of having vehicles that can run for a month or two, now you can have vehicles that can run for a year or longer, because they’re not damaged as much by things that damage other scooters, while the cost of charging and maintaining them is cut to a fraction.”

Superpedestrian already has orders in the books for their new scooters and the data they produce. Within a matter of months, they will be whizzing down roads across North America, Europe, and parts of Asia.

From prototype to product

Since its inception in 2004, Biderman has served as the associate director of MIT’s Senseable City Laboratory. The group’s research identified several factors that are straining cities’ traditional transportation networks, including a growing global population, increased urbanization, and automakers’ incentives to sell larger cars even though most people commute to work alone.

“All of this puts immense pressure on transportation,” Biderman says. “Your downtown street is not going to double in width anytime soon. … Most studies predict that by the middle of this century, we’ll have around three times more people wanting to move on urban roads. The only way we’re going to address this demand is by making smarter use of our existing roads.”

In 2009, the lab started building a prototype electric bicycle that could help address some of those issues. The result was the Copenhagen Wheel. The wheel’s hub stores energy every time a rider brakes, then provides a power boost when they push down on the pedals. The wheel can also monitor the rider’s speed, torque, and calories burned, as well as an array of environmental parameters.

In 2013, Biderman decided to start Superpedestrian, with the idea of combining intelligent software with all of the things that make electric vehicles go.

The Vehicle Intelligence system the company eventually designed uses on-board microprocessors to monitor and control all the mechanical, electrical, and thermal aspects of the vehicle. It can also infer problems with the vehicle based on outliers in the data it collects — including higher temperatures in battery cells or slight changes in motor current. If such data appear, the system can take steps to compensate for the problem, protecting both the rider and vehicle within nanoseconds.

For example, if a capacitor in one of Superpedestrian’s scooters is damaged as the result of a crash or fall, the Vehicle Intelligence system will detect the problem immediately. The vehicle will then measure how much capacitance is left in the system, and, if there’s enough capacitance to continue operating safely, it will simply reduce the scooter’s speed limit and send a nonurgent service request to the cloud that could be addressed the next time the vehicle is picked up for charging.

The Copenhagen Wheel, the company’s first product to feature its Vehicle Intelligence system, was released at the beginning of 2017, quickly becoming one of the best selling e-bikes in the U.S, according to the company. As the system was used in various conditions and climates, Superpedestrian came to fully appreciate its power.

“Because the vehicles communicate rich data about their own functionality in real-time to our servers, we realized in about a year that more than 55 percent of technical issues were addressed without human intervention,” Biderman says. “That’s got no parallels in the electric bike, micromobility, or automotive industries.”

As the Superpedestrian team was gearing up for a focused launch of the Copenhagen Wheel in Europe, rentable e-scooter companies like Bird and Lime started appearing in cities around the world. The scooters quickly became a popular — if controversial — way to get around.

It soon became clear, however, that scooter operators had put more thought into finding new markets and attracting customers than designing sophisticated transportation vehicles. One common problem is that different scooter subsystems, such as batteries, motors, and controllers, are made by different manufacturers. That can negatively impact both performance and operators’ ability to gather higher-level insights into their vehicles. The dearth of self-protection and diagnostic capabilities in these vehicles, along with  their nonconnected components, make maintenance and repair efforts so time consuming that many operators resort to throwing out damaged vehicles rather than repairing them.

Superpedestrian, on the other hand, builds every component of its platform. Having anticipated building other vehicles in addition to bikes, the company designed its Vehicle Intelligence system to work with any vehicle that has a power output under 3 kilowatts.

“When this [e-scooter] industry was born, we said, ‘Let’s pause; we’ll come back to the European consumer market, because we’re still bullish on that, but this industry is booming now. It’s here, it’s a large market, and it really needs what we have,” Biderman says.

Now Superpedestrian is in the final stages of shipping its scooters to some of the largest operators in the world. Although Biderman cannot disclose specific partnerships, he says orders are currently being fulfilled and expects them to be on roads in the next few months.

With a slightly wider platform and handlebar stem than other scooters, it feels and looks more rugged than what’s on the road today. The company also says the vehicles have a much longer range than other scooters thanks to “the industry’s most efficient powertrain.” And, with its Vehicle Intelligence system, the company says the scooters are safer and much cheaper to maintain than anything the industry has seen.

Biderman believes e-scooters are just the beginning of a revolution in urban mobility, and thinks Superpedestrian has positioned itself well to accelerate that transformation: “We’ll see scooters and e-bikes and mopeds and enclosed vehicles and multiwheel vehicles. It’s about minimizing the number of miles that cars drive while maximizing access to mobility for people. That’s where we think we contribute.”

Assaf Biderman ‘05, associate director of the MIT SENSEable City Lab, discusses his startup Superpedestrian, a transportation robotics company that has developed electric scooters available in over 60 cities across the world.  “I think we hit the holy grail of micromobility, which is detecting when you’re on the sidewalk every time and stopping or slowing the vehicle,” said Biderman.

Boston Globe reporter Aaron Pressman spotlights MIT startup Superpedestrian, a scooter rental service. “Superpedestrian’s scooters, packed with sensors, GPS, and a cellular connection, don’t need to be parked in a dock,” writes Pressman. “Instead, the company scatters them around cities in convenient locations.”