Designer of the Louvre pyramid and of the East Building of the National Gallery of Art left a distinctive mark on the MIT campus.
Watch Video
School of Architecture and Planning
Publication Date:
Press Inquiries

Caption:
I.M. Pei ’40 left a lasting mark on the MIT campus and community. He was a member of the MIT Corporation and an honorary member of the Council for the Arts at MIT.
Credits:
Image courtesy of Pei Partnership Architects

Caption:
Dreyfus Building at left, with Cecil and Ida Green Building at right, both designed by I.M. Pei

Over the course of a long international career, he designed notable buildings that included museums, cultural and research centers, civic buildings, and office towers. A dedicated modernist, he received the architecture world’s highest honors for his large body of work.

Among his best-known projects are the glass pyramid entrance pavilion he designed for the Louvre museum in Paris, and the East Building of the National Gallery of Art in Washington.

In 1964, Jacqueline Kennedy chose Pei to design the John F. Kennedy Presidential Library and Museum in Dorchester, Massachusetts. Other Boston-area projects include the west wing of the Museum of Fine Arts.

“Pei was a giant whose vast and varied output consistently rose to the civic responsibility of architecture, elevating cultural, institutional, and residential buildings alike to monuments of modern life,” says Hashim Sarkis, dean of the MIT School of Architecture and Planning.

“Pei's contribution to the physical environment of MIT has been significant, with several key buildings that established the form of the contemporary campus,” says Andrew Scott, professor and acting head of the Department of Architecture. “Building 66, which poses a triangular form that finely resolves the forces of the urban geometry, and Building 18, which elegantly frames the landscape of the inner quads, are still personal favorites and outstanding laboratory typologies to this day.” 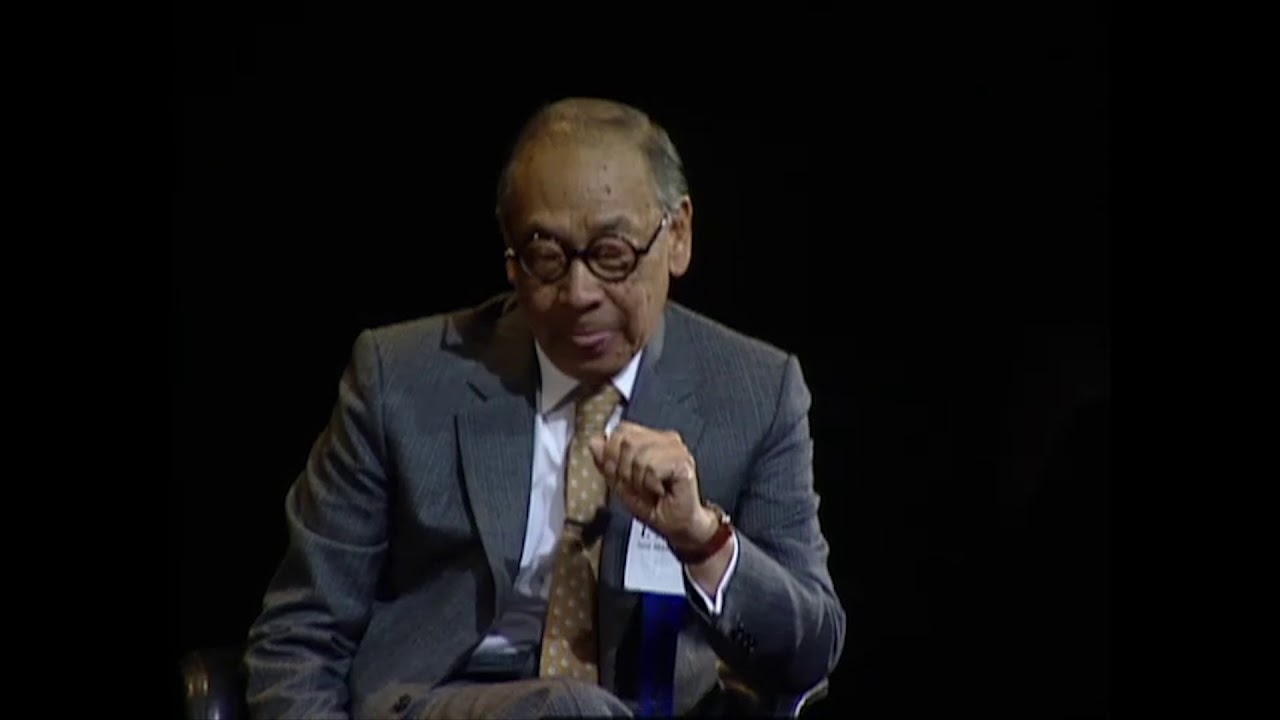 Play video
Internationally renowned architect and MIT alumnus I. M. Pei ’40 offers a uniquely personal behind-the-scenes account of the conceptualization, design, and construction of one of his most famous projects, the revitalization of the Louvre museum in Paris. Pei also shares an MIT-related anecdote, as he describes how all the tension elements in his design were made by a small Massachusetts company. Pei's conversation with MIT Professor William Mitchell takes place on June 4, 1994; they are introduced by Ellen Harris, associate provost of the arts.

Ieoh Ming Pei was born on April 26, 1917, in Canton (now Guangzhou), China. The son of a prominent banker, he grew up in Shanghai and Hong Kong. Pei began his college studies at the University of Pennsylvania before transferring to MIT, from which he graduated in 1940 with a bachelor of architecture degree. His thesis title was “Standardized Propaganda Units for War Time and Peace Time China.”

He met his wife, Eileen (Ay-Ling) Loo, also from China, while he was at MIT and she was studying art at Wellesley College. They married when she graduated, in 1942; both then pursued graduate study at Harvard University, from which he received a master’s degree in 1946.

After teaching briefly at Harvard, Pei worked for New York commercial real estate developer William Zeckendorf for 12 years. During this time he hired a former student, Henry Cobb, with whom he would be professionally associated for six decades. Pei founded his own firm, I.M. Pei and Associates (later Pei, Cobb and Freed), in 1955 with Cobb and Eason Leonard. Among a vast number of projects, the firm produced the 700-foot-tall John Hancock Tower in Boston, designed by Cobb.

“I.M. Pei’s work across many contexts and cultures has an enduring, timeless quality,” says Scott. “He was a master-architect with a deep understanding and sophistication with issues of urbanism, scale of object and detail, spatial orchestration, and formal composition.”

Among his many awards and honors were the Pritzker Prize in 1983; the Gold Medal of the American Institute of Architects in 1979; and the Japanese Praemium Imperiale, for lifetime achievement, in 1989.

He is survived by sons Li Chung Pei and Chien Chung Pei, both architects; daughter Liane Pei, a lawyer; and grandchildren and great-grandchildren. His son T’ing Chung Pei MCP ‘67, an urban planner, died in 2003. Eileen Pei died in 2014.

Wall Street Journal reporter Brenda Cronin spotlights the work of I.M. Pei, an MIT alumnus and renowned architect, who died on May 16. Pei was “an architect whose graceful grids of glass and metal redrew skylines around the world,” writes Cronin.

Boston Globe reporter Sean Smyth spotlights how the work of the late I.M. Pei, a renowned architect and MIT alumnus, can be found throughout the MIT campus and around the world. Smyth notes that Pei’s portfolio included the Green Building at MIT, the Landau Building at MIT, the West Wing addition to the MFA in Boston and the Louvre pyramid in Paris.

I.M Pei, an MIT graduate and architect known for designing some of the world’s best-known buildings, has died at 102, reports Kathy McCormick and Deepti Hajela for the Associated Press. Pei’s buildings “added elegance to landscapes worldwide with their powerful geometric shapes and grand spaces.”

New York Times reporter Paul Goldberger memorializes the life and work of MIT alumnus I.M. Pei, “one of the most revered architects in the world.” Goldberger writes that Pei, “maintained that he wanted not just to solve problems but also to produce ‘an architecture of ideas.’”

MIT alumnus I.M. Pei, “who was widely recognized as the most prominent American architect of his generation,” has died at age 102, reports Robert Campbell for The Boston Globe. Campbell notes that Pei “charted his own course, remaining a canonical modernist and ignoring the fads and revolutions in taste.”