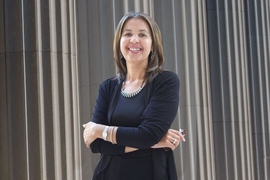 Allen, currently assistant dean for human resources in the School of Architecture and Planning (SA+P), will begin her new role on Oct. 1. Her appointment was announced today by Executive Vice President and Treasurer Israel Ruiz in an email to MIT faculty and staff.

“Ramona brings a deep appreciation and understanding of the MIT organization and culture, broad experience as a strategic thinker and creative problem solver, a collaborative and approachable management style, and exceptional leadership skills,” Ruiz wrote. “She has demonstrated a sustained dedication to MIT and an unwavering commitment to our community.”

Allen joined MIT in 1989 and has served since then in a variety of human resources roles. During her tenure, she has served as an advisor to three SA+P deans and to the leadership of a number of departments, labs, and centers across campus.

“After three decades, I am still inspired and excited about the work that happens at MIT,” Allen says. “People are our most valuable resource. It’s the role of HR — along with the faculty and staff who lead MIT’s departments, labs, centers, and other units ­— to recognize and make individuals feel valued and a true part of this community. I am honored to return to MIT Human Resources to work with the talented and committed professionals who work quietly behind the scenes to support life at MIT.”

Allen will report to Ruiz, with a dotted-line connection to Provost Martin Schmidt. In his letter, Ruiz thanked Deputy Executive Vice President Anthony Sharon, who has led MIT Human Resources on an interim basis since the departure of Lorraine Goffe, MIT’s former vice president for human resources, at the end of 2018.

Before coming to the Institute, Allen spent nine years working at Harvard Community Health Plan. Her first position at MIT, from 1989 to 1995, was as a personnel officer in MIT Human Resources, supporting the interdisciplinary research centers and laboratories under the vice president for research. Beginning in 1995, Allen served as human resources administrator in the Department of Biology; she joined the MIT Media Lab as its first director of human resources in 2001.

“At once transformative and stabilizing, Ramona Allen brings a humane perspective to every aspect of human resources,” says Hashim Sarkis, dean of the MIT School of Architecture and Planning.

Through her many roles over 30 years at MIT, Ruiz wrote, Allen’s experience has extended to many facets of human resources, including employee relations, labor relations, compensation, promotion and tenure processes, and training programs. She has developed flexible and creative workplace structures and diversity and inclusion plans.

“I have the greatest enthusiasm for the many contributions I know Ramona will continue to make to the Institute,” Ruiz wrote in his letter to MIT faculty and staff.