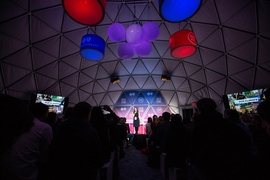 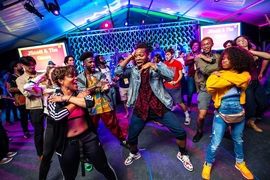 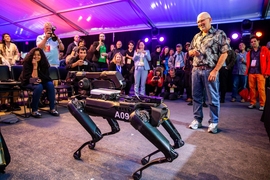 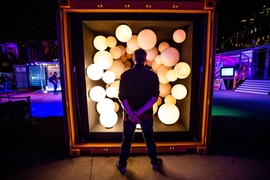 Caption:
HubWeek’s novel approach to civic engagement has grown from one discrete, ideas-packed week into a series of conversations spread throughout the year. (Image from Hubweek 2018)
Credits:
Images: HubWeek

Caption:
HubWeek’s Fall Festival is back for its fifth installment and will run from Oct. 1 to 3 in Boston’s Seaport neighborhood. (Image from Hubweek 2018)
Credits:
Images: HubWeek

Caption:
Hubweek began with the objective to highlight and connect the people who power the city’s innovation ecosystem. (Image from Hubweek 2018)
Credits:
Images: HubWeek

Caption:
Over the past five years, HubWeek has catalyzed dozens of ventures, many of them conceived and led by MIT students and alumni. (Image from Hubweek 2018)
Credits:
Images: HubWeek

HubWeek’s Fall Festival is back for its fifth installment. From Oct. 1 to 3, more than 50 speakers and dozens of curated experiences will take center stage in Boston’s Seaport neighborhood, as part of Greater Boston’s annual festival of ideas, arts, technology, and innovation.

After five years of startup pitch competitions and innovation challenges, policy “hackathons” and interactive conversations with change makers both seasoned and just starting out, HubWeek has succeeded beyond its planners’ dreams.

“HubWeek has always been about the idea that the future is being created here, at the intersection of art, science, and technology,” says Kathleen Kennedy, formerly director of special projects at MIT and now executive director of the MIT Center for Collective Intelligence. “We wanted to elevate that message and celebrate the people that are architecting the future.”

Kennedy has been helping to guide the gathering’s evolution since 2014, when MIT joined Harvard University, Massachusetts General Hospital, and The Boston Globe to jointly launch the festival, which has since become a widely anticipated fixture on the city’s calendar.

Their premise was that Boston’s role as one of the world’s great hubs of creative problem-solving, entrepreneurship, and intellectual exploration deserved a dedicated spotlight. Their objective was to highlight and connect the people who power the city’s innovation ecosystem.

A diverse roster of thinkers and doers from the MIT community has been deeply involved in HubWeek programming from the start, and this year is no different.

On Oct. 2, Ariel Ekblaw, founding director of the MIT Media Lab’s Space Exploration Initiative, will describe her groundbreaking work developing self-assembling space habitat prototypes as part of “Bodies in Space,” a panel discussion on the future of space exploration. Another event will feature a discussion of the latest advances in robotics with Professor Russ Tedrake, who heads the Robot Locomotion Group at MIT’s Computer Science and Artificial Intelligence Laboratory.

This year’s iteration also represents an evolution of HubWeek’s novel approach to civic engagement: It has grown from one discrete, ideas-packed week into a series of conversations spread throughout the year.

A key feature of HubWeek has long been its “Open Doors” events. As part of this series over the years, MIT has welcomed the broader public into many of its signature ventures and programs.

Now, “Open Doors” events take place throughout the year. Each month it moves to a different neighborhood. These gatherings function like a roving town square, fostering serendipitous encounters and spontaneous conversations. September’s gathering took place in Dudley Square; November’s will happen in Allston/Brighton.

“With this new, year-round ‘Open Doors’ model, we’re able to connect with a range of fascinating people in a range of neighborhoods around Boston,” says Jessie Schlosser Smith, director of open space programming at MIT and a member of the HubWeek board. “Each ‘Open Doors’ is a little different than the last, depending on where it takes place, the programming, and who shows up.”

“We wanted to expand the number of opportunities,” says Kennedy. “HubWeek is all about activating the community. We can provide HubWeek’s distinctive convening function at multiple levels and scales, in different communities, and not just once every fall but throughout the year.”

This past July, for instance, Open Doors came to Kendall Square, where participants toured the new state-of-the-art lab space of MIT.nano and learned about how nanotechnology research (much of it taking place at MIT) will change just about everything. They mixed and mingled in a sold out speed-mentoring event, with MIT leaders like David Nuñez, director of technology and digital strategy at the MIT Museum, and Ritu Raman, founder of the Women in STEM Database at MIT (WiSDM). A session at the Broad Institute of MIT and Harvard had MIT experts giving talks on advances in synthetic biology and genome sequencing.

“In these Open Doors events, the learning goes both ways,” says Smith. “It’s a mechanism for connecting. In July, MIT was sharing its own incredible work, but MIT people were also connecting and learning about other amazing work that’s happening around Boston.”

This kind of evolution, says Kennedy, is part and parcel of the experimental ethos of HubWeek, and was largely based on feedback from participants. “It’s a lesson of the past four years of HubWeek: People wanted more and wanted to spread things out throughout the year. We’ll continue to listen to our community, and continue to expand those opportunities.”

Over the past five years, HubWeek has also catalyzed dozens of ventures, many of them conceived and led by MIT students and alumni.

For example, the Demo Day pitch competition, which brings together aspiring entrepreneurs and expert judges for a grand business plan pitch competition, has always had a strong showing from the MIT community. The winner of the 2017 competition was You Wu PhD ’18, who launched a venture based on his mechanical engineering PhD research that used robotics to locate and fix leaking urban water pipes.

Another unexpected boon has been the connections forged between people and programs within MIT itself, as a result of participating in HubWeek over the years.

“I am so thankful for the great people I’ve worked with and the fantastic relationships we’ve built with all the partners within MIT,” says Kennedy.

“In Boston, everyone often has their heads down, focused on building things,” she notes. HubWeek gives them a chance to look up, and look around and what everyone else is building.

“It’s a little bit outside of everyone’s normal job,” Kennedy says, “but it’s something that people are really attracted to. People love what we’re building.”

MIT and HUBweek showcase ideas and innovators making the future

At The HUB, a celebration of art, technology, and innovation