Giving voice to a student community with a “silent” identity

The First Generation Program is ramping up support for MIT students who are the first in their family to go to college.
Elizabeth Durant | Office of the Vice Chancellor
Publication Date:
Press Inquiries 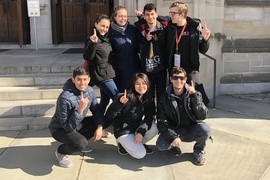 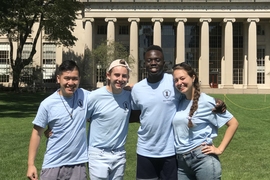 On a sweltering August day, a group of 16 incoming MIT undergraduate students gathered in West Lounge for “Identifying the Identity,” a workshop designed to help them explore their backgrounds and experiences as first-generation students. Presenter and MIT senior Tina Pavlovich neatly encapsulated a shared strength on an overhead slide: “First Generation/Low Income students possess especially strong determination, persistence, and resilience. It is the ability to overcome significant hardship that makes us uniquely driven. Remember that.”

That was just one of many takeaways of a new preorientation program sponsored by the First Generation Program (FGP). Known as FLIPOP (shorthand for First Gen/Low-Income Pre-Orientation Program), the six-day program aims to ease the transition from high school to college. Guided by Pavlovich and three other student counselors — all first-generation students themselves — participants became familiar with resources and opportunities, explored the MIT campus, and began to create an enduring community.

Beyond introducing the nuts and bolts of campus life, “we wanted to start them off at MIT by saying, ‘You are going to be OK.’ There are people here who’ve been through what you’re about to go through and have the backgrounds that you have,” says sophomore and FLIPOP counselor Tanner Bonner.

FLIPOP is part of a suite of new programs and events — from mixers to mentoring — that FGP is offering this year to increase visibility and bolster a sense of belonging among this population. “Last year, we surveyed our students to get input on how we can improve,” says Taylor Pons, FGP advisor in the Office of the First Year. “And our student leaders have really drawn inspiration from connecting with first gen students at other colleges. We are channeling all of that into FGP, and I’m excited about the changes we’re making this year.”

First-generation students comprise roughly one-fifth of the undergraduate population at MIT. And yet, it can feel like an invisible identity, because some students believe that there’s a stigma attached to being first generation. “It’s hard to speak up about the fact that you are first gen,” says Pavlovich. Students that are also low-income may feel even more stigmatized. “Those issues overlap greatly,” notes Bonner.

“Many of our first gen students have overcome significant challenges just to get to MIT. They develop amazing resilience and coping skills, which is great. But once they get here, there are a number of issues they may have to navigate,” Pons says. “These tend to revolve around finances, academic preparation, and just figuring out how college works — often without guidance from home.”

“There’s also the social aspect,” Pavlovich adds, “like, ‘I’m hearing conversations about people going out to this restaurant that is very expensive that I can’t afford. How do I navigate that? Or, how do I make friends with people who I feel comfortable with if being first gen is such a big part of my identity, but it’s an invisible part of my identity?”

Another common theme is “breakaway guilt,” says sophomore Claudia Cabral. “The trouble is in navigating these in-between worlds. … You feel guilty for feeling like you’re leaving your family behind. It’s hard to dive in and say, ‘This is for me to build my career, my future, and I need to think of that right now,’ when in the back of my mind I always have, ‘It’s for us, it’s for all of us; my successes are your successes.’”

Despite these common experiences, a conundrum remains. “It’s a very interesting dynamic,” says Cabral. “How do you build a community with a silent identity?”

Pavlovich, Bonner, and Cabral had the opportunity to probe that conundrum last February. They were among seven students who, along with Pons, attended a conference for first-generation students last February at Princeton, called 1vyG. The annual event provides an opportunity for first gen and low-income students to share experiences, forge connections, and empower each other.

“It was incredible,” Bonner says, from the deep, authentic conversations about their identity to learning what other colleges are doing to support first gen and low-income students. “That trip validated feelings I had about myself, about issues I’d faced. It taught me that I’m strong; I’m not weak. There are so many other people going through this. I want other people at MIT to know that.”

It was eye-opening for Pavlovich, as well. “There are people across the U.S. who are going through so many similar experiences,” says Pavlovich. “We may feel kind of alone when we’re on campus, but coming here we feel so connected. I realized we need to be able to talk about [our experiences] … this is what we could do at MIT.”

Pons and the students identified key takeaways from 1vyG and brainstormed ways to incorporate their ideas into future FGP programming. “Once the conference happened, there was enough activation energy to be like, ‘Let’s do this! Let’s make some changes!’” says Cabral.

Bonner, Cabral, and Pons began planning FLIPOP shortly after they returned to campus. In addition to plugging in practical information and fun activities, they allocated ample time to talk about being first gen. Those conversations paid off; one participant wrote afterward, “I wasn’t expecting myself to have such a tight-knit family by the time I got out of FLIPOP.”

In addition to FLIPOP, Pons and the students are rolling out new FGP programs throughout the year. Inspired by discussions at 1vyG about intersectionality — the interconnections between different social groups — they planned two mixers in October, in partnership with the International Students Office, Office of Minority Education, and LGBTQ+ Services. Monthly family-style dinners and an open mic night are also in the works, among other events.

FGP is also piloting a peer mentoring program and has developed new training for faculty advisors, to help them understand issues first gen students may face and familiarize them with available resources. Meanwhile, the Office of the Vice Chancellor recently formed a First Gen/Low Income Working Group, co-chaired by Pons, to assess the Institute’s overall efforts to support first-generation and low-income students.

To help first gen students feel more part of the fabric of the campus, FGP has launched a sticker campaign, with a logo featuring Tim the Beaver wearing a FGP t-shirt and cap. The stickers are available to first gen faculty and staff — or anyone who wants to show their support. “If you walk by a professor’s office and you see that sticker, it almost changes the way you think about your relationship with them and what you might be able to talk to them about,” Bonner explains. He and other FGP student leaders will be in Lobby 10 handing out stickers and other first-generation swag on Nov. 8, as part of National First-Generation College Celebration Day.

“It all goes back to seeing an invisible identity on campus,” he says.

A community for African students at MIT

Communities in the cloud