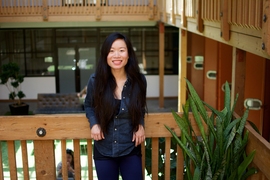 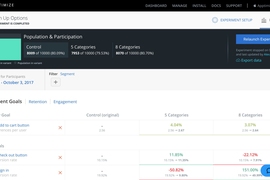 Nancy Hua discovered the power of numbers early on in life. Her aptitude for math earned her a scholarship to MIT and later brought her success as an algorithmic trader, first in Chicago, then New York City.

When her mother was diagnosed with cancer, Hua says she used numbers to avoid her own emotions, finding comfort in long work days that made her feel productive and in control. But when her mother passed away, the finance world she’d committed herself to began to feel hollow.

She began to think deeply about what would make her happy in life, and after much self reflection, she decided to leave finance and refocus herself around priorities such as building relationships, making an impact, and learning.

The new perspective led Hua to start Apptimize, a company that helps product teams experiment with and test digital features across their customer-facing platforms. The service allows companies to make quick, data-driven decisions about customer engagement to create the best possible digital experience.

Today, the impact of Apptimize can be measured in the hundreds of millions: Companies using Apptimize have around 300 million monthly active users on their apps. Hua says Apptimize is the top-selling testing solution for mobile apps, and now the company is working to help its customers optimize every digital channel.

Hua was born in China and moved to America when she was 4. Hua’s father became a science professor, while her mother worked as a waitress. Both worked long hours to make ends meet as Hua received free lunches at school and came home to an empty house at night.

Hua repaid her parents for their sacrifices by devoting herself to school, using her analytical thinking and affinity for math and science to earn a scholarship to MIT. After graduating in 2007, Hua took a lucrative job as an algorithmic trader in Chicago.

“I just wanted to make as much money as possible, because we never had any when I was growing up,” Hua says.

She excelled at the job and was having fun competing with the other quantitative traders in the financial markets. Indeed, by the numbers, Hua seemed to be living the American dream. Then both of her parents got sick.

Hua’s mother went to the doctor for back pain and was diagnosed with stage 4 lung cancer. Around the same time, her father found out he had colon cancer. Hua’s father would eventually enter remission, but when her mother’s conditioned worsened, Hua moved her team to New York City to be closer to her. Even as she spent more time with her mother, Hua says she used her work to avoid the shock and grief she felt. When her mother ultimately passed away, it caused Hua to reevaluate her life pursuits.

“[After my mother’s death], I tried to think about what needed to happen for me to feel like I was living a fulfilling life, and I think my notion of that expanded,” Hua says. “So I thought about how much impact I wanted to have and the importance of connecting with people. Starting a company just seemed like the next step.”

Hua left the finance world in 2012. During her time off, she visited some friends from MIT in San Francisco and found inspiration in the community feeling of the startups where they worked. Hua understood that starting a company brought major risks and would require a broader set of skills than anything she’d experienced in finance. Ultimately, she says it was a risk she had to take.

When Hua founded Apptimize in 2013, she says the process for updating mobile apps reminded her of the early 2000s, when software updates were mailed on CDs. While it was common for companies to experiment with different features on their websites, the process of testing and optimizing mobile apps was far more laborious and imprecise.

This resulted in poor user experiences and lost revenue, so Hua partnered with software engineer and Apptimize co-founder Jeremy Orlow to build a tool that gives product teams the ability to perform mobile experiments with the same speed and control as website testing tools.

From the company’s founding in 2013 to October of last year, Hua served as the copmany’s CEO, often leaning heavily on her MIT network.

“My first executive [hire] was one of my MIT dormmates,” Hua recalls. “MIT kids are just really straightforward and honest and hardworking, so that’s affected our culture and hiring profile a lot. I’m always recruiting from MIT.”

Hua also thinks her academic independence at MIT has improved her confidence.

“At MIT, you get a lot of room to do what you want,” Hua says. “They’re really supportive and ready to give you resources for anything you want to pursue. That’s led to the culture and values we have at Apptimize, and also how I live my life. I like initiating things; I never think anything is impossible. I just think if we work harder and learn more we’ll be able to figure it out.”

That attitude has helped Hua’s team build a seamless testing experience for customers. To get started, companies install Aptimize’s software development kit and use tags and visual editors on Apptimize’s web interface to change variables — no programming required. Companies can also use Apptimize to experiment with different customer flows or test different features during a rollout. Apptimize integrates with popular tracking tools like Google Analytics and offers its own analytics platform.

In October, Apptimize announced an expansion of its platform that gives companies the ability to test and track user acitivity across mobile, web, streaming, and even in-store channels.

Hua recently moved to chairman of the board at Apptimize, but she’s still actively involved in company operations. Notably, she’s found happiness working on the human side of the company, making new hires, planning company outings, and navigating multiple office moves in search for the right space for her team.

Success in those tasks is more subjective than anything she worked on in finance, but Hua prefers it that way.

“My mother’s death caused me to think about my own death in a way, and to consider how I could live differently,” Hua says. “Then it took me years to make that shift. I realized life is not all about work and money. You have to have other things that make you feel like you’re doing something meaningful.”