A platform for Africa’s mobile innovators 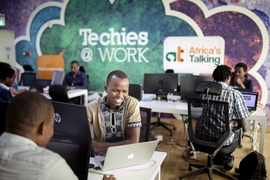 ↓ Download Image
Caption: Africa's Talking, which offers developers voice and text functions to add to their solutions, employs around 160 people and is scaling quickly around Africa.
Credits: Image courtesy of Africa's Talking

Caption:
Africa's Talking, which offers developers voice and text functions to add to their solutions, employs around 160 people and is scaling quickly around Africa.
Credits:
Image courtesy of Africa's Talking

Sam Gikandi ’05 SM ’06 and Eston Kimani ’05 have always believed in the potential of Africa’s entrepreneurial community. Their years at MIT, beginning in 2001 when they left their home country of Kenya, only reinforced that belief.

Through the MIT-Africa initiative and other campus programs that allowed them to work in regions across the African continent, they met hundreds of established and aspiring software developers, many of whom were in various stages of starting companies.

In order for these developers to maximize their impact, Gikandi and Kimani knew they’d need to reach the hundreds of millions of Africans who own cell phones but not smartphones. That has traditionally required entrepreneurs to go through several long and complex processes, including applying for access to telecommunications infrastructure from mobile operators, setting up the necessary technical integrations, and gaining approval from regulatory agencies in each region they wanted to operate in.

Gikandi and Kimani felt those hurdles were holding Africa’s businesses back, so they founded Africa’s Talking to unleash entrepreneurs’ full potential.

Since 2012, the company, known colloquially as AT, has been helping businesses in Africa communicate and transact with customers — whether they have a smartphone or not — through text, voice, and other mobile-centered application programming interfaces, or APIs.

The APIs act as plug-and-play capabilities for developers to quickly add mobile features, including the ability to send and receive payments, to their solution. Gikandi describes the company as “telecom in a box.”

Africa’s Talking currently operates in 18 countries around Africa and supports about 5,000 businesses ranging from early-stage startups to large organizations. Businesses can add APIs as new needs arise and pay as they go, dramatically reducing the risks and time commitment traditionally associated with telecom integrations.

This spring, the company launched AT Labs, which aims to leverage its network, expertise, and infrastructure to help entrepreneurs create impactful companies in the shortest possible timeframe.

Gikandi, who ceded his CEO role at Africa’s Talking to lead AT Labs, says the new program will take a small stake in the companies it supports. But he also wants to incentivize founders to give back to AT Labs once they’ve had success.

He says the business model is in line with the larger symbiotic relationship between Africa’s Talking and its customers, in which all parties feed off of each other’s success: “We have a big advantage with Africa’s Talking, but we feel we only grow when the local ecosystem grows.”

The rise in cell phone ownership among Africans over the last 15 years has given entrepreneurs the opportunity to create transformative solutions on the continent. But Gikandi says telecom companies make the process of gaining access to their infrastructure very difficult, sometimes forcing entrepreneurs to obtain multiple contracts for the same service or denying their requests outright.

“That’s basically a full-time business in itself,” Gikandi says of gaining approvals from telecom companies. “A lot of innovation wasn’t happening because developers didn’t see how they could leverage that infrastructure. We really lowered the barrier.”

Now, if an entrepreneur builds a financial lending solution, for example, they might use AT’s texting API to allow people to register for the service through an SMS message. The entrepreneur may then use another AT API, known as Unstructured Supplementary Service Data (USSD), to gather more information (think of prompts such as “Reply X for more information on Y”). After a customer is registered, it could be useful to send them text- or voice-based payment reminders. And AT’s payments API makes it easy for businesses to send and receive money through text messages, a powerful tool for working with the millions of Africans without bank accounts.

Africa’s Talking even offers businesses a call center and an analytics platform for tracking customer contacts and engagement.

“The developers just have to tap into AT, and then we can coordinate [everything],” Gikandi says. “The developers can outsource their telecom infrastructure to AT and just focus on their core business.”

Gikandi says Africa’s Talking is still in growth mode after raising an $8.6 million funding round last year. Since 2016, the company has had a presence in several countries in east Africa and in Nigeria. The new funds have allowed it to spread into southern Africa (including in Zimbabwe, Zambia, South Africa, and Botswana) and west Africa (including Côte d’Ivoire and Senegal).

It can be difficult for entrepreneurs in the West to appreciate just how huge these markets are: At around 1.2 billion people, Africa’s population is nearly equal to the populations of Europe and North America combined. Each country Africa’s Talking expands to brings a wave of entrepreneurs eager to improve lives with innovative, mobile-based solutions.

“We think it’s really powerful,” Gikandi says. “Let’s say we add a new payment integration in Nigeria. You could then run your business in Nigeria without changing anything in your core business. It creates economies of scale, and allows businesses to focus on what’s important: The value they’re delivering to their customers.”

In Februrary, Gikandi handed his CEO role at Africa’s Talking over to longtime chief operating officer Bilha Ndirangu ’06. Gikandi says he knows Ndirangu can continue growing the company while he puts more time into AT Labs, which is still in the early stages of building its incubator-like support model. For AT Labs, Gikandi envisions a studio that brings people with ideas together with technical talent, infrastructure, and business expertise.

With both Africa’s Talking and AT Labs, Gikandi’s goal is to support the African continent by tapping into its most valuable resource: its people.

“Africa is full of industry and consumers,” Gikandi says. “So the goal is to create a single platform where entrepreneurs can access the entire African market.”