Urban heat island effects depend on a city’s layout 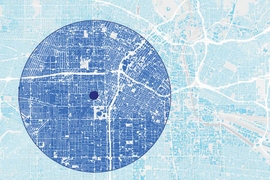 ↓ Download Image
Caption: A new study found that cities with an orderly pattern, like the street grid seen in most of this map, have a much greater urban heat island effect than those with a more disorderly pattern, such as areas in the upper right.
Credits: Courtesy of the researchers

Caption:
A new study found that cities with an orderly pattern, like the street grid seen in most of this map, have a much greater urban heat island effect than those with a more disorderly pattern, such as areas in the upper right.
Credits:
Courtesy of the researchers

The arrangement of a city’s streets and buildings plays a crucial role in the local urban heat island effect, which causes cities to be hotter than their surroundings, researchers have found. The new finding could provide city planners and officials with new ways to influence those effects.

Some cities, such as New York and Chicago, are laid out on a precise grid, like the atoms in a crystal, while others such as Boston or London are arranged more chaotically, like the disordered atoms in a liquid or glass. The researchers found that the “crystalline” cities had a far greater buildup of heat compared to their surroundings than did the “glass-like” ones.

The study, published today in the journal Physical Review Letters, found these differences in city patterns, which they call “texture,” was the most important determinant of a city’s heat island effect. The research was carried out by MIT and National Center for Scientific Research senior research scientist Roland Pellenq, who is also director of a joint MIT/ CNRS/Aix-Marseille University laboratory called <MSE>2 (MultiScale Material Science for Energy and Environment); professor of civil and environmental engineering Franz-Josef Ulm; research assistant Jacob Sobstyl; <MSE>2 senior research scientist T. Emig; and M.J. Abdolhosseini Qomi, assistant professor of civil and environmental engineering at the University of California at Irvine.

The heat island effect has been known for decades. It essentially results from the fact that urban building materials, such as concrete and asphalt, can absorb heat during the day and radiate it back at night, much more than areas covered with vegetation do. The effect can be quite dramatic, adding as much as 10 degrees Farenheit to night-time temperatures in places such as Phoenix, Arizona. In such places this effect can significantly increase health problems and energy use during hot weather, so a better understanding of what produces it will be important in an era when ever more people are living in cities.

The team found that using mathematical models that were developed to analyze atomic structures in materials provides a useful tool, leading to a straightforward formula to describe the way a city’s design would influence its heat-island effect, Pellenq says.

“We use tools of classical statistical physics,” he explains. The researchers adapted formulas initially devised to describe how individual atoms in a material are affected by forces from the other atoms, and they reduced these complex sets of relationships to much simpler statistical descriptions of the relative distances of nearby buildings to each other. They then applied them to patterns of buildings determined from satellite images of 47 cities in the U.S. and other countries, ultimately ending up with a single index number for each — called the local order parameter — ranging between 0 (total disorder) and 1 (perfect crystalline structure), to provide a statistical description of the cluster of nearest neighbors of any given building.

For each city, they had to collect reliable temperature data, which came from one station within the city and another outside it but nearby, and then determine the difference.

To calculate this local order parameter, physicists typically have to use methods such as bombarding materials with neutrons to locate the positions of atoms within them. But for this project, Pellenq says, “to get the building positions we don’t use neutrons, just Google maps.” Using algorithms they developed to determine the parameter from the city maps, they found that the cities varied from 0.5 to 0.9.

The differences in the heating effect seem to result from the way buildings reradiate heat that can then be reabsorbed by other buildings that face them directly, the team determined.

“If you’re planning a new section of Phoenix,” Pellenq says, “you don’t want to build on a grid, since it’s already a very hot place. But somewhere in Canada, a mayor may say no, we’ll choose to use the grid, to keep the city warmer.”

The effects are significant, he says. The team evaluated all the states individually and found, for example, that in the state of Florida alone urban heat island effects cause an estimated $400 million in excess costs for air conditioning. “This gives a strategy for urban planners,” he says. While in general it’s simpler to follow a grid pattern, in terms of placing utility lines, sewer and water pipes, and transportation systems, in places where heat can be a serious issue, it can be well worth the extra complications for a less linear layout.

This study also suggests that research on construction materials may offer a way forward to properly manage heat interaction between buildings in cities’ historical downtown areas.

The work was partly supported by the Concrete Sustainability Hub at MIT, sponsored by the Portland Cement Association and the Ready-Mixed Concrete Research and Education Foundation.

A study from senior researcher Rolland Pellenq finds that grid-like cities retain more heat than those that are less-linear, due to the “Urban Heat Island” effect. “For new cities, or even neighborhoods, our findings can be used…in designing block layouts that would help optimize temperature,” Pellenq explains to Marlene Cimons of Popular Science.

Led by senior research scientist Rolland Pellenq, students in the School of Engineering developed a model “that links a city’s ‘texture’ to its night-time UHI (Urban Heat Index),” writes Laurie Winkless for Forbes. The team hopes their research will influence future urban development, especially in very hot or cold climates.

Senior research scientist Roland Pellenq and his colleagues have found that the layout of a city’s streets and buildings impacts the way it heats up. “Scientists found cities with more geometric, grid-like layouts, such as New York and Chicago, had a greater heat island effect than cities with less uniformity, like London and Boston,” writes Brooks Hays for UPI.