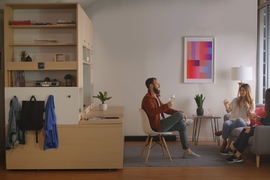 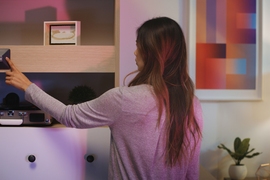 ↓ Download Image
Caption: Users control the Ori system through a control hub plugged into a wall, or through a mobile app or a smart home system, such as Amazon’s Echo.
Credits: Courtesy of Ori 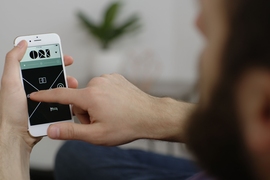 ↓ Download Image
Caption: Users control the Ori system through a control hub plugged into a wall, or through a mobile app or a smart home system, such as Amazon’s Echo.
Credits: Courtesy of Ori

Caption:
MIT Media Lab spinout Ori is developing smart robotic furniture that transforms into a bedroom, working or storage area, or large closet — or slides back against the wall — to optimize space in small apartments.
Credits:
Courtesy of Ori

Caption:
Users control the Ori system through a control hub plugged into a wall, or through a mobile app or a smart home system, such as Amazon’s Echo.

Caption:
Users control the Ori system through a control hub plugged into a wall, or through a mobile app or a smart home system, such as Amazon’s Echo.

Imagine living in a cramped studio apartment in a large city — but being able to summon your bed or closet through a mobile app, call forth your desk using voice command, or have everything retract at the push of a button.

MIT Media Lab spinout Ori aims to make that type of robotic living a reality. The Boston-based startup is selling smart robotic furniture that transforms into a bedroom, working or storage area, or large closet — or slides back against the wall — to optimize space in small apartments.

Based on years of Media Lab work, Ori’s system is an L-shaped unit installed on a track along a wall, so can slide back and forth. One side features a closet, a small fold-out desk, and several drawers and large cubbies. At the bottom is a pull-out bed. The other side of the unit includes a horizontal surface that can open out to form a table. The vertical surface above that features a large nook where a television can be placed, and additional drawers and cubbies. The third side, opposite the wall, contains still more shelving, and pegs to hang coats and other items.

Users control the unit through a control hub plugged into a wall, or through Ori’s mobile app or a smart home system, such as Amazon’s Echo.

Essentially, a small studio can at any time become a bedroom, lounge, walk-in closet, or living and working area, says Ori founder and CEO Hasier Larrea SM ’15. “We use robotics to … make small spaces act like they were two or three times bigger,” he says. “Around 200 square feet seems too small [total area] to live in, but a 200-square-foot bedroom or living room doesn’t seem so small.” Larrea was named to Forbes’ 2017 30 Under 30 list for his work with Ori.

The first commercial line of the systems, which goes for about $10,000, is now being sold to real estate developers in Boston and other major cities across the U.S. and Canada, for newly built or available apartments. In Boston, partners include Skanska, which has apartments in the Seaport; Samuels and Associates, with buildings around Harvard Square; and Hines for its Marina Bay units. Someday, Larrea says, the system could be bought directly by consumers.

Once the system catches on and the technology evolves, Larrea imagines future apartments could be furnished entirely with robotic furniture from Ori and other companies.

“These technologies can evolve for kitchens, bathrooms, and general partition walls. At some point, a two-bedroom apartment could turn into a large studio, transform into three rooms for your startup, or go into ‘party mode,’ where it all opens up again,” Larrea says. “Spaces will adapt to us, instead of us adapting to spaces, which is what we’ve been doing for so many years.”

The group’s primary focus was tackling challenges of mass urbanization, as cities are becoming increasingly popular living destinations. “Data tells us that, in places like China and India, 600 million people will move from towns to cities in the next 15 years,” Larrea says. “Not only is the way we move through cities and feed people going to need to evolve, but so will the way people live and work in spaces.”

A second emerging phenomenon was the Internet of Things, which saw an influx of smart gadgets, including household items and furniture, designed to connect to the Internet. “Those two megatrends were bound to converge,” Larrea says.

The group started a project called CityHome, creating what it called “architectural robotics,” which integrated robotics, architecture, computer science, and engineering to design smart, modular furniture. The group prototyped a moveable wall that could be controlled via gesture control — which looked similar to today’s Ori system — and constructed a mock 200-square-foot studio apartment on the fifth floor of the Media Lab to test it out. Within the group, the unit was called “furniture with superpowers,” Larrea says, as it made small spaces seem bigger.

After they had constructed their working prototype, in early 2015 the researchers wanted to scale up. Inspiration came from the Media Lab-LEGO MindStorms collaboration from the late 1990s, where researchers created kits that incorporated sensors and motors inside traditional LEGO bricks so kids could build robots and researchers could prototype.

Drawing from that concept, the group built standardized components that could be assembled into a larger piece of modular furniture — what Ori now calls the robotic “muscle,” “skeleton,” “brains,” and the furniture “skins.” Specifically, the muscle consists of the track, motors, and electronics that actuate the system. The skeleton is the frame and the wheels that give the unit structure and movement. The brain is the microcomputer that controls all the safety features and connects the device to the Internet. And the skin is the various pieces of furniture that can be integrated, using the same robotic architecture.

Today, units fit full- or queen-size mattresses and come in different colors. In the future, however, any type of furniture could be integrated, creating units of various shapes, sizes, uses, and price. “The robotics will keep evolving but stay standardized … so, by adding different skins, you can really create anything you can imagine,” Larrea says.

Going through the Martin Trust Center for MIT Entrepreneurship’s summer accelerator delta V (then called the Global Founders Skills Accelerator) in 2015 “kickstarted” the startup, Larrea says. One lesson that particularly stood out: the importance of conducting market research. “At MIT, sometimes we assume, because we have such a cool technology, marketing it will be easy. … But we forget to talk to people,” he says.

In the early days, the co-founders put tech development aside to speak with owners of studios, offices, and hotels, as well as tenants. In doing so, they learned studio renters in particular had three major complaints: Couples wanted separate living areas, and everyone wanted walk-in closets and space to host parties. The startup then focused on developing a furniture unit that addressed those issues.

After earning one of its first investors in the Media Lab’s E14 Fund in fall 2015, the startup installed an early version of its system in several Boston apartments for renters to test and provide feedback. Soon after, the system hit apartments in 10 major cities across the U.S. and Canada, including San Francisco, Vancouver, Chicago, Miami, and New York. Over the past two years, the startup has used feedback from those pilots to refine the system into today’s commercial model.

Ori will ship an initial production run of 500 units for apartments over the next few months. Soon, Larrea says, the startup also aims to penetrate adjacent markets, such as hotels, dormitories, and offices. “The idea is to prove this isn’t a one-trick pony,” Larrea says. “It’s part of a more comprehensive strategy to unlock the potential of space.”

Hasier Larrea MS ’15 - CEO of Ori, a company that creates expandable tiny apartments - writes for Newsweek about his journey and inspiration for developing expandable housing options. Larrea writes that Ori is focused on creating, “expandable urban apartments that are more flexible, functional, affordable and sustainable—in short, living spaces that can suit the amazing diversity of people who want to live in the world's most incredible cities.”

Robotic furniture produced by MIT spinout Ori, which created a furniture system that reconfigures itself with the push of a button or voice commands, could be the solution to living in small spaces, writes Candace Jackson for The New York Times.

Boston Herald reporter Jordan Graham writes about Ori, a Media Lab spinout that aims to make apartments more functional and spacious through the use of robotic furniture. Founder and CEO Hasier Larrea, an MIT alumnus, explains that by using technology and robotics, “you can make a 300-square-foot apartment be much more functional than a traditional static 400-square-foot apartment.”

Media Lab spinout “Ori” has developed what its founder Hasier Larrea SM ’15 calls a “Swiss Army knife for studio apartments,” writes Andy Rosen for The Boston Globe.  A “robotic furniture system,” the compact 8 by 5 foot design can equip even the smallest rooms with a bed, multiple desks, closet, and entertainment system.