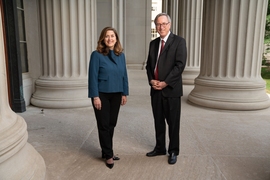 ↓ Download Image
Caption: After 12 years of service at MIT, Senior Vice President and Secretary of the MIT Corporation R. Gregory Morgan (right) will step down at the end of this year. He will be succeeded by Suzanne Glassburn (left), who has been an attorney in MIT’s Office of the General Counsel since 2008.
Credits: Image: Bryce Vickmark 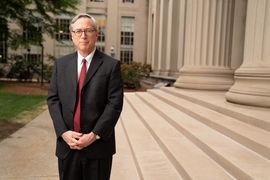 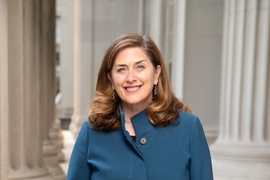 Caption:
After 12 years of service at MIT, Senior Vice President and Secretary of the MIT Corporation R. Gregory Morgan (right) will step down at the end of this year. He will be succeeded by Suzanne Glassburn (left), who has been an attorney in MIT’s Office of the General Counsel since 2008.
Credits:
Image: Bryce Vickmark

After 12 years of service at MIT, Senior Vice President and Secretary of the MIT Corporation R. Gregory Morgan will step down at the end of this year, President L. Rafael Reif announced today in a letter to members of the MIT community. He will be succeeded by Suzanne Glassburn, who has been an attorney in MIT’s Office of the General Counsel (OGC) since 2008.

“Since I took office and long before, Greg has been among my closest and most trusted advisors,” Reif said in his letter. He pointed out that Morgan’s duties have covered a wide swath: “His vital work includes serving as chief of staff — coordinating the efforts of MIT’s senior leadership, the MIT Corporation, its Executive Committee and the overall administration, raising our sights and making us all more effective.”

Morgan came to MIT in January 2007 at the request of then-president Susan Hockfield, to be MIT’s first general counsel and create for the first time a unified in-house legal team for the Institute. Together with then-Deputy General Counsel Mark DiVincenzo, he quickly established the OGC by bringing together MIT’s internal legal talent and then steadily built the team by attracting other highly qualified attorneys to MIT from top law firms.

“Because the general counsel role was new for MIT, there was some skepticism at first, but Greg’s effectiveness quickly dispelled those doubts,” says MIT President Emerita Susan Hockfield. “His ability to listen astutely, his breadth of curiosity, and his tenacity at solving hard problems made him an invaluable thought partner, to me and to individuals across the Institute. We were incredibly fortunate to have Greg navigate the transition to the ‘Office of the General Counsel’ model, which continues to serve MIT so well.”

Before coming to MIT, Morgan was co-managing partner of the prominent law firm of Munger, Tolles and Olson, where he had practiced law since 1981, with clients including Berkshire Hathaway and its chair Warren Buffett. A graduate of the University of Michigan Law School, he had clerked for Judge J. Edward Lumbard of the U.S. Court of Appeals for the 2nd Circuit, as well as for Justice Lewis F. Powell Jr. of the U.S. Supreme Court.

At MIT, Morgan has played an important role in shaping the framework for several major new Institute initiatives, first as vice president and general counsel, and since 2015 in his present role. This work included setting the terms of MIT’s involvement in the creation of new universities in other countries, including the Skolkovo Institute of Science and Technology (Skoltech) in Russia. He also played a key role in the launch of the online education platforms MITx and edX and in the transition of the Broad Institute into a free-standing, self-governed entity that remains tightly coupled to MIT.

President Reif, in his letter to members of the MIT community, praised Morgan’s abilities, saying “he has served the MIT community with extraordinary dedication, working at the highest levels, often behind the scenes, and around the clock. From helping to respond to terrible crises like the Boston Marathon bombing and the tragic impact on our campus, to the essential work of MIT’s governance, over and over I have counted on his rare scope and sensitivity to get things right.”

Recognizing that MIT students often need independent legal advice, Morgan was instrumental in creating a series of law clinics for students, to help them deal with matters such as the legal questions involved in creating new startup companies based on their research, or other legal issues relating to intellectual property or cybersecurity. He forged an agreement with the Boston University Law School, which agreed to provide law students to staff the clinics. The clinics are now offered weekly during the academic year and have seen steadily rising demand from students for their services. “It’s an educational experience for both the MIT students as clients and the BU students as lawyers,” Morgan says.

Morgan will continue his role at MIT until the end of 2018, and starting in September he will overlap with Glassburn in order to ensure a smooth transition. “I don’t know what I’m going to do next,” he adds, but he says he wants to “rediscover and reinvent,” and find out where his curiosity takes him.

Glassburn, one of Morgan’s early hires for the office, will conclude her work as an attorney for MIT as she assumes her new position. She joined MIT’s OGC in April 2008 after 17 years at the Boston-based law firm Nutter, McClennen and Fish, where she had been a partner since 1999.

“Through her deep understanding of MIT’s academic and research transactional needs, her ability to identify the core needs of each party and bring them to agreement, and her wise counsel to her OGC colleagues, Suzanne has been a tremendous asset to our office, and to the Institute,” says Vice President and General Counsel Mark DiVincenzo. “Though I will miss her representing MIT as a lawyer in the OGC, I have every confidence that the skills and qualities she has mastered in her legal role at the Institute will serve Suzanne very well in her new role.”

A graduate of Vanderbilt University and the University of Pennsylvania Law School, she handled a wide variety of subjects in her law practice, including mergers and acquisitions and intellectual property, and was co-chair of the firm’s Emerging Companies Group. But, after her years at the law firm, she came to a conclusion: “Where I’d really like to work is at a university.” Though she enjoyed her work, “I wanted something that excited me more,” she recalls, and MIT seemed the perfect fit.

In her years at the Institute, Glassburn says, she has had the good fortune to work on a number of projects that support President Reif’s agenda, including the establishment of MITx and edX; the launch of the Quest for Intelligence, an initiative focused on human and machine intelligence; and the creation of The Engine, a venture to support “tough-tech” companies at work on transformative ideas.

She has also worked closely on several of the Institute’s significant initiatives, including the MIT–IBM Watson AI Lab; the Advanced Functional Fabrics of America (AFFOA) public-private partnership, established with support from the U.S. Department of Defense; and a number of international collaborations that led to new universities — Skoltech in Russia, the Singapore University of Technology and Design, and the Masdar Institute (now Khalifa University) in Abu Dhabi.

“The most exciting and interesting part of my career has been the time I’ve spent at MIT,” Glassburn says. Among other things, it has given her the chance to work with many amazing people on interesting and challenging projects, she says, and “in this new role, I’ll have an even greater opportunity” to collaborate with such talented people.

In taking on her new position, Glassburn says, “I’m looking forward to expanding the range of issues I get to work on,” including work on major issues such as “the future of education, the future of work, and the future of the environment. … I’m excited to have a more direct impact on what the Institute is trying to achieve.”