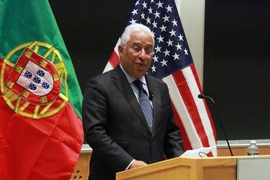 ↓ Download Image
Caption: Prime Minister of Portugal António Costa gave a speech to a full house in the Kirsch Auditorium at the Stata Center, which included many students in the MIT Portugal Program.
Credits: Image: Allegra Boverman 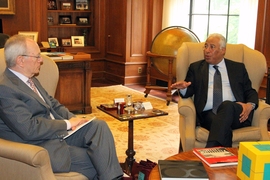 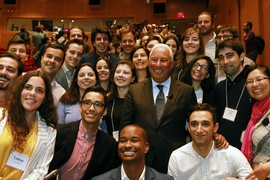 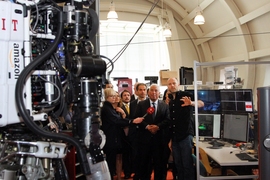 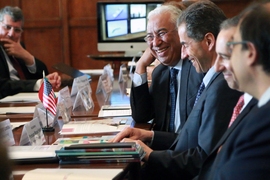 ↓ Download Image
Caption: Prime Minister António Costa (center) listens to students in the MIT Portugal Program discussing what they are doing at MIT and how they're enjoying their work. Next to him at right is Manuel Heitor, Portuguese minister of science, technology and higher education.
Credits: Image: Allegra Boverman

Caption:
Prime Minister of Portugal António Costa gave a speech to a full house in the Kirsch Auditorium at the Stata Center, which included many students in the MIT Portugal Program.
Credits:
Image: Allegra Boverman

Caption:
Prime Minister António Costa poses for photos after speeches in the Kirsch Auditorium of the Stata Center with students in the MIT Portugal Program.
Credits:
Image: Allegra Boverman

Caption:
Prime Minister António Costa (center) listens to students in the MIT Portugal Program discussing what they are doing at MIT and how they're enjoying their work. Next to him at right is Manuel Heitor, Portuguese minister of science, technology and higher education.
Credits:
Image: Allegra Boverman

Prime Minister António Costa of Portugal heralded the importance of science and innovation in a visit to the Institute on Monday, days after his country formally renewed the popular MIT Portugal Program.

‘The future arrives quicker than expected,” said Costa, in remarks to a filled lecture hall in MIT’s Stata Center, adding: “There is no better way to prepare our modern society and economy for the unexpected path of innovation and technological development than to invest in the education of younger generations.”

Costa’s visit came about 10 days after the official renewal of the MIT Portugal Program, a joint endeavor to push forward scientific research and innovation while creating collaborations between industry and academia.

MIT Provost Martin A. Schmidt, speaking just before Costa, said Institute leaders were “pleased and thrilled” to have seen “MIT Portugal develop across a range of programs and projects in research, education, and innovation.”

Costa also had a one-on-one meeting with MIT President L. Rafael Reif, who told the Portugese leader that it was a “tremendous honor” to meet him. ‘There is much to admire about your country,” he said.

The MIT Portugal program provides opportunities for exceptional students to study at MIT and in Portugal, working with faculty from both MIT and Portugese  universities. Now entering its third phase, the program will have an emphasis on research in earth sciences, climate studies, data science, digital design and manufacturing, and urban studies.

The program was created in 2006 and renewed for the first time in 2013, with this year’s long-term renewal of support by Portugal being made official on June 1. The program has had over 1,000 students over the last 12 years.

“MIT Portugal has had a huge impact on our scientific system and universities,” Costa said.

MIT’s faculty lead for the new phase of the program will be Dava Newman, the Apollo Professor of Astronautics and Engineering Systems at MIT, who praised Portugal on Monday for having “the vision to invest in their work force.”

Costa, a native of Lisbon, has been prime minister of Portugal since 2015. He served the federal government in Portugal in a variety of ministerial roles for about a decade before serving as mayor of Lisbon from 2007 through 2015.

Costa was accompanied by a delegation of Portugese officials, including Manuel Heitor, the Portuguese minister for science, technology, and higher education.

“MIT Portugal is about the future,” said Heitor, an engineering professor by trade who has written extensively about science and technology policy, and also spoke at the event. Heitor added: “We want to address new challenges.”

The Portugese leaders also toured workspaces at MIT, including an extended stop at the Robot Locomotion Group led by Russ Tedrake, the Toyota Professor of Electrical Engineering and Computer Science, Aeronautics and Astronautics, and Mechanical Engineering at MIT.

Costa and Heitor also talked to a group of about a dozen Portugese graduate students currently at the Institute as part of the MIT Portugal Program. The students discussed their fields of study, which included clean energy, civil engineering, management, and medical research.

“These people are leaders — who represent our own ambition,” said Heitor, referring to the students.

At one point, Costa also asked the students, “What can we do to improve the program?” In response, Luiz Lisboa de Silva Cardoso, a graduate student in mechanical engineering, simply quipped, “Keep going.”

Costa affirmed his desire to do so in his talk, concluding, “We are proud to have MIT as our partner because, we believe, with MIT, the sky is not the limit.”