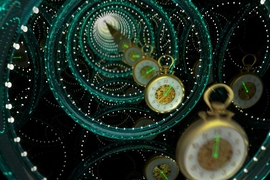 ↓ Download Image
Caption: MIT researchers have developed novel photography optics, dubbed “time-folded optics,” that captures images based on the timing of reflecting light inside the lens, instead of the traditional approach that relies on the arrangement of optical components. The invention opens doors for new capabilities for ultrafast time- or depth-sensitive cameras.
Credits: Courtesy of the researchers

Caption:
MIT researchers have developed novel photography optics, dubbed “time-folded optics,” that captures images based on the timing of reflecting light inside the lens, instead of the traditional approach that relies on the arrangement of optical components. The invention opens doors for new capabilities for ultrafast time- or depth-sensitive cameras.
Credits:
Courtesy of the researchers

MIT researchers have developed novel photography optics that capture images based on the timing of reflecting light inside the optics, instead of the traditional approach that relies on the arrangement of optical components. These new principles, the researchers say, open doors to new capabilities for time- or depth-sensitive cameras, which are not possible with conventional photography optics.

Specifically, the researchers designed new optics for an ultrafast sensor called a streak camera that resolves images from ultrashort pulses of light. Streak cameras and other ultrafast cameras have been used to make a trillion-frame-per-second video, scan through closed books, and provide depth map of a 3-D scene, among other applications. Such cameras have relied on conventional optics, which have various design constraints. For example, a lens with a given focal length, measured in millimeters or centimeters, has to sit at a distance from an imaging sensor equal to or greater than that focal length to capture an image. This basically means the lenses must be very long.

In a paper published in this week’s Nature Photonics, MIT Media Lab researchers describe a technique that makes a light signal reflect back and forth off carefully positioned mirrors inside the lens system. A fast imaging sensor captures a separate image at each reflection time. The result is a sequence of images — each corresponding to a different point in time, and to a different distance from the lens. Each image can be accessed at its specific time. The researchers have coined this technique “time-folded optics.”

“When you have a fast sensor camera, to resolve light passing through optics, you can trade time for space,” says Barmak Heshmat, first author on the paper. “That’s the core concept of time folding. … You look at the optic at the right time, and that time is equal to looking at it in the right distance. You can then arrange optics in new ways that have capabilities that were not possible before.”

The new optics architecture includes a set of semireflective parallel mirrors that reduce, or “fold,” the focal length every time the light reflects between the mirrors. By placing the set of mirrors between the lens and sensor, the researchers condensed the distance of optics arrangement by an order of magnitude while still capturing an image of the scene.

In their study, the researchers demonstrate three uses for time-folded optics for ultrafast cameras and other depth-sensitive imaging devices. These cameras, also called “time-of-flight” cameras, measure the time that it takes for a pulse of light to reflect off a scene and return to a sensor, to estimate the depth of the 3-D scene.

Folding the optical path into time

The researchers’ system consists of a component that projects a femtosecond (quadrillionth of a second) laser pulse into a scene to illuminate target objects. Traditional photography optics change the shape of the light signal as it travels through the curved glasses. This shape change creates an image on the sensor. But, with the researchers’ optics, instead of heading right to the sensor, the signal first bounces back and forth between mirrors precisely arranged to trap and reflect light. Each one of these reflections is called a “round trip.” At each round trip, some light is captured by the sensor programed to image at a specific time interval — for example, a 1-nanosecond snapshot every 30 nanoseconds.

A key innovation is that each round trip of light moves the focal point — where a sensor is positioned to capture an image — closer to the lens. This allows the lens to be drastically condensed. Say a streak camera wants to capture an image with the long focal length of a traditional lens. With time-folded optics, the first round-trip pulls the focal point about double the length of the set of mirrors closer to the lens, and each subsequent round trip brings the focal point closer and closer still. Depending on the number of round trips, a sensor can then be placed very near the lens.

By placing the sensor at a precise focal point, determined by total round trips, the camera can capture a sharp final image, as well as different stages of the light signal, each coded at a different time, as the signal changes shape to produce the image. (The first few shots will be blurry, but after several round trips the target object will come into focus.)

In their paper, the researchers demonstrate this by imaging a femtosecond light pulse through a mask engraved with “MIT,” set 53 centimeters away from the lens aperture. To capture the image, the traditional 20-centimeter focal length lens would have to sit around 32 centimeters away from the sensor. The time-folded optics, however, pulled the image into focus after five round trips, with only a 3.1-centimeter lens-sensor distance.

This could be useful, Heshmat says, in designing more compact telescope lenses that capture, say, ultrafast signals from space, or for designing smaller and lighter lenses for satellites to image the surface of the ground.

The researchers next imaged two patterns spaced about 50 centimeters apart from each other, but each within line of sight of the camera. An “X” pattern was 55 centimeters from the lens, and a “II” pattern was 4 centimeters from the lens. By precisely rearranging the optics — in part, by placing the lens in between the two mirrors — they shaped the light in a way that each round trip created a new magnification in a single image acquisition. In that way, it’s as if the camera zooms in with each round trip. When they shot the laser into the scene, the result was two separate, focused images, created in one shot — the X pattern captured on the first round trip, and the II pattern captured on the second round trip.

The researchers then demonstrated an ultrafast multispectral (or multicolor) camera. They designed two color-reflecting mirrors and a broadband mirror — one tuned to reflect one color, set closer to the lens, and one tuned to reflect a second color, set farther back from the lens. They imaged a mask with an “A” and “B,” with the A illuminated the second color and the B illuminated the first color, both for a few tenths of a picosecond.

One key feature of the paper, Heshmat says, is it opens doors for many different optics designs by tweaking the cavity spacing, or by using different types of cavities, sensors, and lenses. “The core message is that when you have a camera that is fast, or has a depth sensor, you don’t need to design optics the way you did for old cameras. You can do much more with the optics by looking at them at the right time,” Heshmat says.

This work “exploits the time dimension to achieve new functionalities in ultrafast cameras that utilize pulsed laser illumination. This opens up a new way to design imaging systems,” says Bahram Jalali, director of the Photonics Laboratory and a professor of electrical and computer engineering at the University of California at Berkeley. “Ultrafast imaging makes it possible to see through diffusive media, such as tissue, and this work hold promise for improving medical imaging in particular for intraoperative microscopes.”

Mixing solids and liquids enhances optical properties of both

Judging a book through its cover